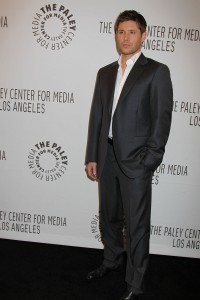 SUPERNATURAL just about hits it out of the park with “Goodbye Stranger.” We get answers, we get emotion, we get some jolting visuals, we get revelations about character’s sexual histories, we get slash that writes itself, we get a super guest cast and we get verbal quotes from STAR WARS and LORD OF THE RINGS and a reference to Sean Astin’s Samwise as “the RUDY hobbit.” There isn’t much more one can ask of an hour of TV, at least on this show.

All season long, the enigmatic Naomi (Amanda Tapping) has been pulling Castiel’s (Misha Collins) angelic strings. In the striking opening of “Goodbye Stranger,” Castiel seems to stab Dean (Jensen Ackles) to death, despite Dean’s pleading. Then the lights come on and we see that this is just a test, which Castiel has finally passed to Naomi’s satisfaction – and the camera pulls back to show that the room is vast, its floor covered in dead Dean Winchesters. Whoa.

Meanwhile, back at their new digs, Sam (Jared Padalecki) finds what sounds like a supernatural situation – and Dean finds bloody Kleenex in the trash can. He’s mad that Sam won’t tell him what’s going on, but holds it. It turns out that Castiel has been demon-hunting here, searching for a missing angel tablet (as is pointed out, if the demon tablet can seal the gates of Hell, what could an angel tablet do?). However, Naomi forces Castiel to lie to Dean and Sam about what he’s looking for.

The three of them find Meg (Rachel Miner), presentlyCrowley’s (Mark A. Sheppard) prisoner, and liberate her, as she can lead them to the tablet (or as the boys think of it, a parchment). It turns out that while Meg was Castiel’s nurse in the psych hospital, they had at least one interlude. Meg seems to be genuinely in love with Cass, and he’s at least fond of her.

When Meg leads them to the general location of the angel tablet, Naomi orders Castiel to go in with only Dean. Castiel gives Dean a true reason for leaving Sam outside with Meg – Sam is damaged on a subatomic level that even Castiel cannot heal. It’s unclear to Castiel whether this will be fatal or not. Dean and Castiel go in, Dean sees that it’s a tablet rather than a parchment, and Naomi orders Castiel to kill Dean. Castiel gives Dean a severe beating, while Dean susses out that someone or something is compelling Castiel and says that he knows Castiel is in there somewhere. Dean says to Cass, “I need you.” Castiel winds up dropping his knife and defying Naomi. He disappears with the tablet.

Crowley has arrived on the scene. He and Meg duel and stab one another.Crowley seems to kill Meg. He survives, but Cass is gone with the tablet and the Winchesters are gone in the car.

Dean tells Sam to stop lying to him about his health and Sam comes clean. Dean then quotes Samwise (sort of) and tells Sam he can’t carry Sam’s burden, “But I can carry you.” Sam recognizes this as a line from LORD OF THE RINGS.

By now, there has been so much going on, with so much revelation and angst and action, that we feel like we may get nosebleeds ourselves from the sheer velocity of it all. That opening scene is a stunner on many levels. The acting is strong all around, with Miner especially knocking it out of the park with her bruised, defiant Meg, showing us the pain of belonging nowhere and with no one, yet ready to fight to the death and beyond.

There’s also a very funny confrontation between Crowley and Naomi, where he tries to charm her with a reminiscence of their long-ago liaison and she, with Tapping sounding truly regal, responds by calling him a cockroach. There seem to be a lot of angelic/demonic hookups going around here.

As for the Dean/Castiel scene, whatever one’s take on the precise depths of the relationship, it’s nice to know that Castiel’s feelings for Dean take precedence over mere mind control. For that matter, while it has been interesting, it also seems like the right time to end the “Manchurian angel” thread and get onto whatever it is that Naomi really wants. Finally, it will be good for Sam and Dean to investigate together whatever is wrong with Sam’s health now, rather than Sam suffering in silence (again).