The Huntress comes back 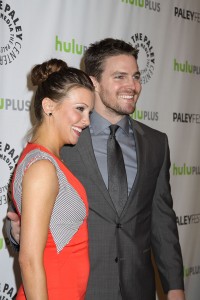 ARROW takes a break from its major storyline involving the list of Starling City’s criminals this week and instead spends an episode focusing on the love life of Oliver Queen (Stephen Amell).  Fortunately, the story of Oliver’s love life also involves crossbow murders and motorcycle chases, so “The Huntress Returns” doesn’t represent much of a letdown for viewers who like ARROW for its action/adventure, and not all the kissing.  As the episode’s title makes fairly unambiguous, this week features the return of Helena Bertinelli (Jessica De Gouw), aka “The Huntress,” (although, as I’ve mentioned before, ARROW has a rule against calling characters by their comic book names within the story itself, except when it’s not-so-subtly winking at its audience in the form of an inside joke).  (There is one of those this week, by the way).  (And it’s not bad).

Anyway, Helena is crazy and homicidal.  She wants to murder her incarcerated father, a mobster who had her fiancé killed, but he’s in protective custody and she doesn’t have a way to get to him.  In the meantime, she makes due by killing her father’s associates, including his sleazy attorney Gus Sabatoni (Craig March) in an attention-grabbing strip club scene in the beginning.  Helena knows that Oliver Queen is not only the masked vigilante who protects Starling City, but also a billionaire with a lot of technology at his disposal, and knows she needs access to Oliver’s resources to find her father and kill him.  She also still has feelings for Oliver, going back to their brief, romantic fling from earlier in the season, and she isn’t happy to find out there are now other women in his life, including his current girlfriend, Detective McKenna Hall (Janina Gavankar) and his quirky hacker sidekick Felicity Smoak (Emily Bett Rickards).

Oliver’s got other troubles too, as his best friend Tommy Merlyn (Colin Donnell) now knows about his secret life as the hooded vigilante, and does not approve.  Tommy has a problem with all the killing Oliver’s done since choosing to put on the hood, and because this weighs on him so much, it doesn’t look like Tommy will be able to keep Oliver’s secret even if he wanted to, since in the early-going we see that he’s not very good at concealing his mood from his girlfriend, Laurel Lance (Katie Cassidy).  Tommy, in his role as club manager, mopes around Oliver’s new nightclub during the grand opening party, and Laurel notices quickly how distant and spacey he is.  Of course, the party takes a more problematic turn for Tommy when he’s taken captive by Helena.  (I guess Oliver didn’t give her photo to the security guys at the door).  Helena holds Tommy in an arm lock while Oliver watches helplessly.  She threatens to kill Tommy and hurt the people Oliver loves if he doesn’t help her locate and kill her father.  Oliver explains to her that her father’s already serving life in prison and has been dealt justice by society, but she tells him that that isn’t good enough for her, which conveniently spells out for Tommy the very different flavor of vigilantism she’s going for, and ensures that he’s going to come around to Oliver’s side of things by the end of the episode.

This leads to one of my favorite jokes of this or any ARROW episode, where John Diggle (David Ramsey) lays into Oliver after learning that he’s agreed to help Helena with her murderous plan in exchange for her leaving his family and friends alone.  Diggle thinks the better solution is to kill Helena, which Oliver would not have hesitated to do if she didn’t “look like the T-Mobile girl.”  (I like this because when this actress first appeared on ARROW I was pretty sure she was the T-Mobile girl).  (Apparently she’s not, by the way).

So Helena’s plan backfires, and she’s arrested during a botched attempt to kill her father while he’s ostensibly being transferred in a police van.  Oliver escapes a similar fate, but there’s a tense scene where Detective Quentin Lance (Paul Blackthorne) and McKenna interrogate Helena back at the station, and she seems poised to give up Oliver as the secret identity of the hooded vigilante.  Oliver breaks her out of the police station (by himself) before that can happen, however, in (what would be) a near-superhuman feat that he accomplishes using only tear gas, (the preposterousness of which ARROW seems not to want us to dwell on after the fact).

Another strange take-away from watching the hooded vigilante and “The Huntress” in action is the realization that, despite the fact that she’s not attempting to conceal her identity from either the police or the mobsters she pursues, “The Huntress” finds it necessary to wear a terrible Hamburglar mask every time she’s ready to go after somebody.  I’ll buy the crossbow and the weird leather skirt thing, but I’m really not sure I understand this.

But the only major effect the events of “The Huntress Returns” have on ARROW is that they serve to conclude McKenna Hall’s time as Oliver’s love interest.  While Helena escapes justice in the finale, presumably to live on and serve as Oliver’s psycho ex-girlfriend at an unspecified later date, McKenna takes a bullet to the leg during the climactic showdown.  She explains to Oliver that she now has a yearlong rehab process ahead of her and that she plans to do it in another city, far away from him, for reasons that aren’t totally clear.  McKenna could always come back later as well, but it seems from this that her time as a regular cast member is done for now.  This will likely clear up Oliver’s schedule so that he can re-ignite his romance with Laurel, (whom the show has made fairly clear is his one true love), and prepare to deliver yet another gut punch to Tommy later on.

In the meantime, here were the other small, but notable, developments from this episode:

-Oliver’s sister Thea (Willa Holland) moves further towards her completely expected romance with Roy Harper (Colton Haynes), the impossibly attractive purse-snatcher from a prior episode.  He saves her from some street thugs and winds up getting stabbed in the process, and at the hospital later, she kisses him unexpectedly to distract him from the giant syringe he’s about to get stuck with as part of his treatment, (because he’s afraid of needles).  This was a pretty nice, surprising moment. (The kiss, not the needles thing).

– Laurel arranges a meeting between her Detective father, Quentin, and her mother, Dinah (Alex Kingston), where mom lays out to dad her theory as to how their daughter Sarah could have survived the shipwreck that they had all assumed that she died in.  Quentin doesn’t believe her theory at first, but by the end of the episode he’s had a change of heart and is willing to explore the possibility that the blurry photo of a girl that looks like his daughter, that was apparently taken by a tourist on an island in the South China Sea, is actually her.  Paul Blackthorne’s performance as a grieving, embittered father has been one of the strongest points of the show to date, by the way, and this week is no exception.

-We don’t get much flashback time on Lian Yu Island this week, and what we do get seems kind of perfunctory.  Younger Oliver has teamed up with Slade Wilson (Manu Bennett) to stop whatever plan Edward Fyres (Sebastian Dunn) is cooking up for the rocket-launching military vehicle that’s just arrived on the island.  Together they steal a “circuit board” from the machine and tell Fyres that they’ll exchange it for some form of passage off the island.  Hopefully Fyres doesn’t have a spare circuit board in a drawer somewhere.

“The Huntress Returns” is an enjoyable episode overall, and having the Huntress return to cause chaos in Oliver’s personal life will probably be a good way for ARROW to do more fun, change-of-pace episodes in the future.  All I ask is that she not bring the ridiculous raccoon mask with her next time.