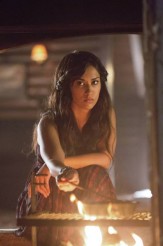 For over 2,000 years there has been doppelgängers! 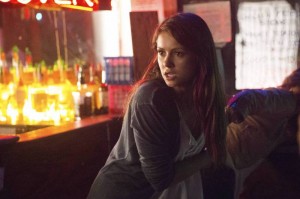 “Original Sin” was a spectacular episode in my opinion as it answered a lot of questions, finally! Who is Silas and how did the Doppelgangers come to light? It was great that they finally brought to life the character of Qetsiyah (Janina Gavankar), who now prefers to be called Tessa…easier to pronounce she feels and doesn’t sound so ancient. After all she is 2,000 years old.

The episode starts where Elena is having a dream of Stefan walking into a bar on Route 29. The bar is closed but a lone female is working closing and Stefan being hungry after the three months in a safe walks over to her and attacks her, but then pulls back and tells her to run. His humanity is still with him…he has not become The Ripper! Why? He fought the urge, as he wanted to be himself when he killed Silas.

While Damon and Elena are still in bed she is telling Damon of her dream and who should show up, but Katherine, who had the same dream and the bar is called Joe’s she announces.

The three of them, much to Elena’s annoyance as Katherine has invited herself along and yells “Shotgun” as riding in the backseat makes her sick. While Elena and Katherine are bickering, Damon goes “the train is leaving the station…choo, choo!” Damon always tries to make light of certain situations, which brings comedy to each episode…he’s a bad boy with a sense of humor!

Meanwhile, Stefan walks outside of the bar and because he no longer has his daylight ring, he starts to catch on fire. In the next scene you find Stefan waking up in a cabin and Tessa leaning over him, he tells her to leave, as he doesn’t want to hurt her and rip her throat out. Tessa goes “well good morning to you too” and hands him a bag of blood. Since at this point you don’t know who she is…so you wonder who is this girl?

She tells Stefan that she was the one who took the safe out of the quarry and he killed her helper, and then rescued him from in front of the bar and brought him to this cabin in the woods. Stefan has no idea what she wants, but he knows she must know what he is. They start to talk about Silas and Tessa tells Stefan that 2,000 years ago in Ancient Greece Silas was not a monster. Stefan asks her “how do you know that?” She goes “because I was there.” Silas was her true love, and the day they were to be married and she had made an elixir to make them immortal so they could be together forever, but he never showed…jilted at the alter! On top of that the immortal elixir was gone…Silas had taken it. Turns out she was not Silas’ true love, he was in love with her hand-maiden Amara, who just happened to look exactly like Katherine and Elena. She finally tells Stefan who she is and continues her story. She was the one that made the cure for immortality. Like a woman scorned she goes back to the tent where she found Silas and Amara and when Silas shows up she tells him that she is not upset anymore, and she brought two gifts for them…the chalice from the wedding that they were to drink from and another cure. She used the first one on Amara, and then slit her throat. Silas going into the tent finds blood everywhere and Tessa holds out the chalice, which contains Amara’s heart.

Back at the bar, the girl that works there tells Damon, after he compels her, and Elena what happened. She tells Damon, it looks like he needs a drink and pours him a shot, which has verbane in it. Nadia (Olga Fonda) one of the Travelers had mind-controlled the bartender to do that. Holding a gun at Elena then Katherine as she is not sure who is the one that Silas wants, but Elena tackles her and tells Katherine to run. How did Nadia find them? Gregor, the other traveler that she killed is now in Matt’s body because he wears the Gilbert ring and can’t die. She tells Matt to call his friend Elena to find out where they are, which is how she knew. Silas wants Matt dead and orders her to kill him, which of course she won’t because of Gregor being in the body.

Damon finally shows up at the cabin and Stefan is tied up and Tessa is doing a spell to fry Silas brain and that is what she needed Stefan for, being that he is Silas doppelganger. Interesting is the fact that Tessa tells Damon that Elena will never be his, as for 2,000 years she has watched as each doppelganger of both Silas and Amara have found each other. It was ordered by the Universe that the doppelgangers must be together. Damon tries to kill her, but she stops him with her mind.

Tessa, who admits she has trusts issues, is paranoid, has control issues and is a little crazy has a great hatred for Silas and him for her. He now knows she is back. When Bonnie brought down the wall she took advantage of it to come back.

Damon and Elena take Stefan back to the house and he finally awakes and tells them “I’m sorry I have no idea who you people are?” It seems that when she fried Silas brain, she also did something to Stefan’s. Before Stefan woke Elena slipped back on his daylight ring.

Katherine is still with Nadia and Silas can’t locate them as he lost that power from the spell. The reason he wants Katherine dead is because the cure runs through her blood and he can’t die and be with Amora until that time comes and he drinks her blood.

Hopefully, the effects of the spell will wear off of Stefan after a few episodes, as like with Vincent in BEAUTY AND THE BEAST…you can only do it for so long until the audience will get bored. All in all this was a very good episode.