An eventful episode for Castiel, with a lot of fun moments 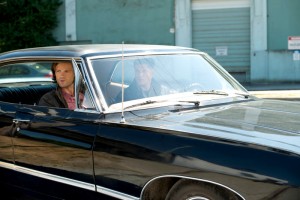 With Misha Collins’ desanctified angel Castiel now human, it makes sense that SUPERNATURAL devotes a good portion of an episode to the character coming to terms with his new condition. In “I’m No Angel,” Cass deals with homelessness, hunger, getting an anti-angel warding tattoo (so the other angels can’t track him) – and, oh yeah, sex.

Unfortunately for Cass, his lover, the apparently cute and sweet April (Shannon Lucio), is actually a Reaper who has hopped into this kindly-looking form. April’s plan is to lull Cass into a false sense of security, then torture him into revealing the plan he’s cooked up with Metatron. Of course, Cass thought Metatron’s plan was something else entirely until it happened, so besides being shocked and hurt at being tricked (after feeling so warm and cuddly, too), he has no information for the April Reaper. It does occur to Cass that if Metatron needed Cass’ angel grace to eject the angels from Heaven, it may be necessary for Cass to stay alive if there’s any hope of getting everybody back home.

Fortunately for Castiel, Dean (Jensen Ackles) has used Ezekiel-in-Sam (Jared Padalecki, shining brightly in both roles) to track Cass down via following Reapers, since Cass’ angel wards mean that Ezekiel and other angels can’t find him directly. Dean and Sam are almost in time, but April stabs Castiel to death before she is killed in the fracas. Ezekiel comes to the fore and heals Cass, before receding and leaving Sam and Castiel both very confused about how it is that Cass has recovered from the apparently fatal attack.

While Castiel heals up at the Men of Letters headquarters, Ezekiel drops a bombshell on Dean. If Castiel stays, he will attract angelic attention that Ezekiel is keen to avoid. Either Castiel must leave or Ezekiel will – whether he takes Sam’s body with him or abandons mortal form, this will be bad news. Dean therefore must tell Castiel he can’t stay.

Meanwhile, current angel on Earth leader Bartholomew (Adam J. Harrington), when he’s not hell-bent on having Cass found, is working with televangelist Buddy Boyle (Kevin Brief) to get humans to open themselves to angels, more literally than most of the audience realizes. Of course, not everybody can withstand being possessed by an angel – some people just explode messily.

As Big Bads go, Bartholomew starts out icy rather than colorful. Brief is a hoot as the Reverend, who is dealing with a giant case of “be careful what you wish for” now that he knows angels are real – and really scary.

Castiel choosing the name Clarence because it’s what Meg used to call him – totally unaware of the IT’S A WONDERFUL LIFE connection – gets more laughs than we might expect, stemming from Dean’s similar ignorance and Sam’s exasperation. There’s also some humor in Dean trying to bring Ezekiel to the fore without alerting Sam that something strange is going on.

And, yes, Castiel reveling in what he eventually calls “hedonism” is sweet and Dean and Sam’s eventual reaction when they find out is entirely appropriate to characters and the situation.

“I’m No Angel” is no groundbreaker, but it’s good fun and moves the story forward.