Home » vampire diaries review for whom the bell tolls

TV Review: THE VAMPIRE DIARIES – Season 5 – “For Whom The Bell Tolls”

Everyone learns Bonnie is dead! 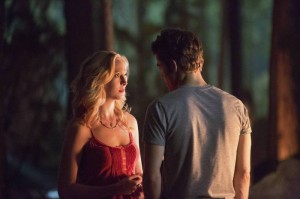 THE VAMPIRE DIARIES episode “For Whom The Bell Tolls” was so sad this week that it actually brought tears to my eyes. Okay I am a very sensitive person, but it was sad at the end! Plus, since I’ve watched the show since the beginning I am totally involved with the characters.

Every year in Mystic Falls they have a special ceremony called Remembrance Day to honor the dead by getting drunk, saying the person’s name and ringing a bell.

Returning to Mystic Falls Caroline brings Jesse along to help her study as she wants to get into the biology class to find out more about the teacher Dr. Maxfield. Jesse has been fascinated with Caroline since the first day of college and kisses her. She pulls back and tells him she has a boyfriend even though ”I don’t know where my boyfriend is, that would require communication, and mutual interest and respect. And I invited you here because you’re smart and you’re nice and I just wanted to hang out with you today.” She can’t actually say my boyfriend is a werewolf and helping out a pack somewhere!

Running into Stefan who at this point is still feeling very hungry. He asks Caroline if she has any blood bags and she tells him in her car. She had compelled Jesse to go wait for her and she would be along shortly since Stefan just threatened him. Waiting inside a crypt Jesse calls Caroline to ask where she is. In the meantime walking to the car she turns around and Stefan is not behind her, he has gone to attack Jesse. He had already attacked a waitress in the bar, but stopped after a drink and then decided to drink some more, but Caroline saved the day. He is aware that he can turn into the Ripper.

Everyone is trying to reach Bonnie, she is the only one that can help with everything…especially help Stefan remember who he is. Jeremy decides the time has come to tell everyone about Bonnie, even though Bonnie is begging him not too. He calls Damon to come over and tells him. Damon who gets very upset and tells Jeremy “Don’t say that.” Then he walks over and hugs Jeremy. Matt is very upset because he has emailed her so many times. He does not remember when he died he saw her. Jeremy tells Matt about Bonnie. Now it is up to Damon to tell Elena about Bonnie.

Meanwhile Matt knows something is wrong with him since he came home in the last episode “Original Sin” covered with mud and carrying a knife that was centuries old. He tells Jeremy to come to his house, as he has to tell someone as he feels he is going crazy. He has put cameras up all over the house as he has blackouts in hopes that he will catch himself on video. And he is not disappointed. Matt watching the video sees himself waking up, answering the phone and speaking another language and he has a cut on his hand. At that point, Gregor speaks to the camera, “Hello, Matt Donovan. I am the passenger inside you. I know you have questions, but all you need to know is to guard the knife and keep it safe as one day my friend will be coming for it” and he cuts his own hand where Matt has the cut on the same place. He continues on to tell Matt, “If you don’t keep it safe, the next cut will be your throat.” Who will be coming for it you wonder…Silas…Nadia? Or could it be Tessa…remember both her and Silas were the original Travelers.

Meanwhile, Elena is trying to make Stefan remember by taking him around different places like back to school, where they first met and then to the bridge where he saved her and then saved Matt. Stefan is enchanted with Elena and is about to kiss her and she stops and tells him she is with Damon. While she was showing Stefan around his desire for blood had stopped. And as soon as she said she was with his brother Stefan goes “and now I’m hungry again.” As Elena turns Stefan disappears. Like Tessa had stated in “Original Sin” the doppelgangers will always find each other, but alas that is not going to happen right at the moment. I believe that Elena deep down inside loves Stefan still.

Returning to the house Elena is still wishing that Bonnie would call her back. Damon tells her she can’t and he tells Elena that Bonnie is dead.  It was time I felt that Bonnie’s friends found out that she was dead and died bringing Jeremy back to life. She couldn’t be traveling forever! Elena breaks down into tears she has lost her best friend.

This was where the really sad part came in. They are in the forest Jeremy, Caroline, Matt, Elena, and Damon. Bonnie is there too! Everyone puts something down on a tree stump, including her book of spells. I did wonder if they were going to set it on fire so no one would get the book, which never happens. Bonnie is talking to them through Jeremy saying I’ve never left you and would always be there and that they had the summer of their lives and she saw them happy. “ Even though they can’t see her she walks up to each one saying what is in her heart. To Elena Bonnie tells her “I know you think now that you can’t have a normal life, that you have to be here for everyone, but you don’t. Everyone will find their way. You are going to repack your things, you’re going to go back to college, and you’re going to live it up.” A lot of times the music that they play in scenes like this can affect the scene and that is what happened…very sad music. To Matt she goes “You didn’t do anything wrong and she would have send 300 emails back if she could.” And Caroline, “I watched you decorate that dorm like you’re life depended on it,” which makes Caroline laugh as the tears run down her face. But something is missing Bonnie feels.

At that point Caroline turns around and Tyler dressed in a suit is walking toward them. Is Tyler back for good? Now that Klaus has left for New Orleans and told Caroline that he will not hunt him anymore will he land up going to college?

Back at college Jesse has stopped in see Dr. Maxfield who took a blood sample and tells him this will be easy, because you have vampire blood in your system and shoots a needle with something in it, which cause Jesse to flatline. Caroline had saved Jesse by giving some of her blood back in the crypt and had compelled him to forget everything.

I knew there was going to be something sinister with Dr. Maxfield from the pilot, but who or what is he? What is he after? I guess in the upcoming storylines we will find out. Will Jesse become a vampire when he awakes? Or if he wakes! More questions for me to ponder over. The fifth season of the Vampire Diaries is absolutely wonderful. I have not found really one part of the storylines that I didn’t like.