The actor also talks his new movie THE OTHER WOMAN 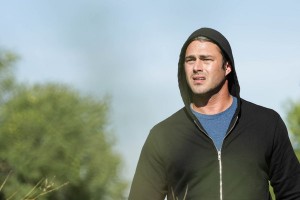 On CHICAGO FIRE, now in its second season on NBC, Tuesday nights at 10 PM,Windy City firefighter Kelly Severide, played by Taylor Kinney, has all sorts of things happening. His father, played by Treat Williams, is taking over the fire house, he broke up with his Russian girlfriend and of course buildings keep burning down.

Meanwhile, Kelly is at a poolside party thrown by NBC for the Television Critics Association at the Beverly Hilton Hotel, where he has a more mundane problem. “My brother is here and I can’t get ahold of him,” the actor explains. “He’s lost.” Then there is communication via cell phone and the problem is solved. “He’s at the bar upstairs, I think.”

ASSIGNMENT X: Can you talk about Severide’s attitude in Season 2, versus where we left him in Season 1?

TAYLOR KINNEY: I don’t think there’s much of a difference. I think the timeline is maybe a month or a two-month gap, between where we saw these characters and where they pick up. Getting back to the firehouse, it’s business as usual. You see some new faces and people coming back, but it’s a bit of feel-good mixed with some drama. We’re not reintroducing characters, but you’ve got a friendly feel of where people left off. Three of the guys [invested in] the bar. There’s a new premise and new story.

AX: What is your own attitude as an actor coming back into Season 2?

KINNEY: I think any anxieties or pressure that I felt, or noise, if you will, was replaced by a confidence with the character and some of the physicality of the role. When we first came in, there are a lot of questions that you have in wherewithal and know-how and, “Am I doing this the right way?” and “What tool would I use in this circumstance or this situation?” In Season 2, you come back and you’re a lot more comfortable in your character’s skin.

AX: You have a stunt double obviously, but you’re doing a fair amount of hairy things yourself. Any major injuries from Season 1?

AX: Anything where you went, “Okay, I’m not going to do it that way again”?

KINNEY: No. I was game for anything. I like to do as much of my stunts as I can, just so long as you limit the liability that the producers have; you don’t want to put yourself in a situation where you’re scaring them. But other than that, I’m game.

AX: It’s been announced that CHICAGO FIRE is getting a spin-off, CHICAGO P.D. Are you going to be doing any guest appearances as Severide on the new series?

KINNEY: I don’t know for sure.

KINNEY: I shot a movie with Nick Cassavetes over the summer, a romantic comedy called THE OTHER WOMAN. I think it will be coming out in April [2014]. I play Leslie Mann’s little brother. So it’s my foray into all things comedy, so to speak. I had a great time and look forward to seeing the film.

KINNEY: I love you, Mama!