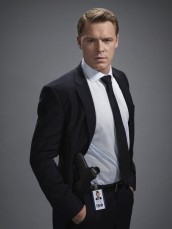 Exclusive Interview: Diego Klattenhoff gets on the THE BLACKLIST 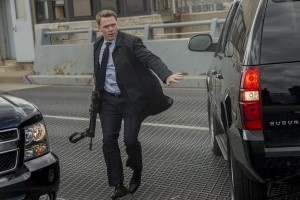 Diego Klattenhoff has recently been doing a lot of government work – onscreen, that is. The Nova Scotia-born actor is currently starring as FBI Agent Donald Ressler on NBC’s espionage drama THE BLACKLIST, Mondays at 10 PM, after spending two seasons (and now recurs) as former Marine/Pentagon employee Mike Faber on Showtime’s HOMELAND. In the middle, he appeared in director Guillermo Del Toro’s feature film PACIFIC RIM as a military pilot operating a giant robot known as a Jaeger.

Klattenhoff is at a party thrown by NBC for the Television Critics Association. He sounds like he couldn’t be happier with all of the gigs listed above.

ASSIGNMENT X: Did you have any hesitation about doing another show with spies right after being on HOMELAND, where you may recur, but you’re not a regular this year?

DIEGO KLATTENHOFF: No, not at all. They were gracious enough over on HOMELAND to let me know that my schedule would open up. We looked and my manager, best manager in the business, Frances Okwu, tracked down this script [for THE BLACKLIST] that everybody was talking about. I finally got my grubby little hands on it and it was terrific and I called them back and said, “We’ve got to get on this show,” and my agent did everything he could, my agents and everybody else did all the legwork and it just came like this – I met them on Tuesday, I tested on Thursday and we shot the following Saturday. So I wasn’t looking for particular content story-wise – I was looking for a great tale. I was looking for really rich characters that people would hook into, or get their hooks into people and take them on a journey.

AX: Can you talk about the differences between Mike Faber and Donald Ressler?

KLATTENHOFF: Well, I think every character you draw from your own experiences and whatever research is required. One works for the Pentagon, one works for the FBI. One has dark hair, one has light hair. We both walk on two feet. I shoot the gun a little bit more [in THE BLACKLIST]. I’ve got blond hair and he’s got dark hair.

AX: Which is your real hair?

KLATTENHOFF: This [indicates his blond locks].

AX: Why did you darken it for HOMELAND – so you wouldn’t have the same hair color as their leading man Damien Lewis

KLATTENHOFF: Very close to that, yes.

AX: How did you feel about the way Mike ended up, at least so far, on HOMELAND?

KLATTENHOFF: I feel great. It’s been a terrific run over there. You couldn’t find a more compelling story – until I got THE BLACKLIST. It’s been nothing but great. I have no regrets. I handed over my life and got everything I signed up for. It was a great ride. I think with actors, once you get into your ambitions and preconceived notions of what the story might be, where it might go, that you can get yourself into a lot of trouble that way. I was kept in the dark for so long, as were a lot of people, on where this story was going to go and what was going to happen with the characters, that you just sign up for that. Like with THE BLACKLIST, I have no idea where it’s going to go. You hand your life over to these amazingly talented people and away you go.

AX: With THE BLACKLIST, the writers have said that nobody is who they appear to be. Have they given you any indication of what Ressler’s secret is? Do you want to know?

KLATTENHOFF: I don’t think I want to know up until it becomes critical for me to know. I think they have a lot of options with where they can go, and that’s the exciting part of being on this show and playing this character, but I’ll definitely tell you that Agent Ressler isn’t a black and white person; this show is always about different shades of gray and different motivations and why people do what they do and these dynamics between these characters, and that will become more intertwined and entwined.

AX: Is it tough trying to dominate somebody like James Spader in those scenes?

KLATTENHOFF: It’s fun. It’s the greatest thing in acting, where you can go in there and have a worthy opponent to tangle with. He’s a beast. You want to go in there and load up and do everything you can and then walk in the room and it all goes out the window and it’s like what Mike Tyson says – everybody’s got a plan until they get punched in the face, and that’s kind of what it’s like when you’re working with Spader. You can prepare, you can do all that stuff, and you just have to deal with what’s in front of you right then. It’s terrific.

AX: And how is it playing off of Harry Lennix, who plays Ressler’s boss?

KLATTENHOFF: He’s great. Harry is such a solid guy, he’s so grounded, he’s terrific in his role. It’s like falling out of a boat and hitting water to do scenes with him. I’ve loved his work for as long as I’ve watched him, so it was pretty easy to get in there and do the job with him, as it is with James Spader and Megan Boone.

AX: Do you enjoy the espionage genre as a viewer?

KLATTENHOFF: I love it. I think there are a lot of compelling stories. It’s just such a great, rich world. There’s a landscape there that is very compelling to me.

AX: Did you have to learn anything for either PACIFIC RIM or for BLACKLIST?

KLATTENHOFF: It was pretty basic. We have great people on set, on both of the projects, to help you movie in the machinery. Legacy did the puppetry and wardrobe for PACIFIC RIM and they did an incredible job. We had a choreographer working there and you’re shooting in this giant head. It’s on a gymbal, so you’re moving and it’s moving at the same time to match your movement to the movement of this robot – the Jaeger, as it’s called, which is five hundred feet tall and fights this incredible beast. And as far as THE BLACKLIST, you go in and we have some advisors, we have some stunt guys who are ex-military badass Rangers and Special Forces. [Director] Joe Carnahan was there, and we had a lot of guys that knew how to use the weapons, so I just cozy up to them and they tell me.

AX: There’s a huge physical sequence in the BLACKLIST pilot where everything is blowing up and the car is falling off train tracks – was that one of the more physical things you’ve been involved in as an actor?

KLATTENHOFF: Yeah, I like to think of myself as a fairly physical guy, so that was a great shoot. It was fun, it wasn’t something where I had to drink twenty cups of coffee in the morning, I was ready to go. Any time you get to fire off all those weapons and throw down that giant M-4 and start shooting another guy, it’s fun for me, it’s like being a ten-year-old boy again, so yeah, it’s a terrific job to have to go to work. It was an intense shoot. PACIFIC RIM was also a brutal, crushingly physical job. That was not ten days of easy work. But you’d do anything – I’d do it a hundred times over for Guillermo.

AX: You’re in the beginning of the film as the Charlie Hunnam character’s brother …

KLATTENHOFF: I play Charlie’s brother Yancy and we are operating one of the Jaegers and it doesn’t go so well for me. I think [PACIFIC RIM] got shortchanged with people’s expectations. It’s a film that whoever watches it comes out saying, “Wow, that was much, much better than I expected, and there’s a lot more story to be had than in all these other summer blockbusters and tentpole movies.” What Guillermo created in that world with these characters is amazing and that’s why I consider him a genius.

AX: How was he to work with?

KLATTENHOFF: He’s a maestro. He’s somebody who can work so many different parts of the machine, he’s everything. He sees everything. He sees what color your shoelaces are. He can direct you as an actor – he’s amazing, because he’s also a writer, he can tell you and he can lift you up to places you don’t know were even there. He can take you in a different direction that you didn’t anticipate, so he’s one of the greats.