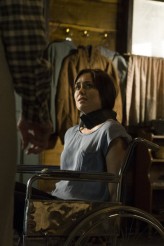 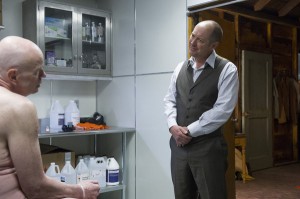 Last week’s episode of THE BLACKLIST gave us some much-needed intel into what’s going on in the overall mythology of the show.

We learned that Raymond Reddington (James Spader) has connections to Elizabeth Keen’s (Megan Boone) father but he isn’t saying how at this point. I speculated that this might be the case or even that he might be her father but it could also just be complete poppycock and he’s using that as a way for her to build trust him to further his own personal agenda – which we do not yet know.

We also learned that someone bugged Keen’s apartment. Is this in relation to her husband who has a stack of passports and money hidden in the floorboard? Is it for Reddington to keep tabs on her? Is it the FBI? This brings up the other point, the FBI obviously does not trust Keen as they have been keeping tabs on her and found the bullet records she tried to uncover, which has ties to Homeland Security.

So would we learn anything more about these developments in “The Stewmaker?”Not really, except for one part at the end where Keen discovers that perhaps the clue to who her husband really is resides in a hotel that he is familiar with and wants to take her to for a little couples getaway.

But that didn’t mean that this episode wasn’t any good. Just the opposite in fact. “The Stewmaker” was the best episode of THE BLACKLIST since the original with a tale of a brutal cleaner that dissolves people and bodies that need to be removed from the mafia, or third world countries or drug dealers into stew. Thus, the moniker.

What this episode really showed was the Keen is in real danger being associated with Reddington as she was kidnapped by a drug dealer she arrested and was set to testify against and given to The Stewmaker for processing. Luckily, Reddington used his wits to track him down and rescue Keen but not before a little drugging and torture – again proving she is in more danger dealing with Reddington than just helping track down the worst of the worst.

This episode also showed what we have been hinted at from the very beginning of this show: Reddington is no saint and is the “monster” that Keen believes him to be. How this dynamic will factor into their relationship will be an interesting thing to see in the future episodes and if it will detract Keen from becoming closer to him or if it will just be an afterthought.

One thing we don’t know is who the girl in the photo was that Reddington took from The Stewmaker’s personal collection. Is it his daughter and that’s the powerful story he told to the cleaner before pushing him into a vat of nasty liquid? Or is it someone else that he was once close to?

THE BLACKLIST continues to be a brutal show (in a good way) and not pulling punches in the content or how it is approaching the character of Reddington. Hopefully it will continue to stay that way.