The director of CUBE realizes a ghostly GROUNDHOG DAY 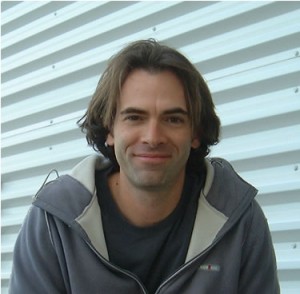 If you’re going to be in horror isolation where history repeats itself, then the Canadian filmmaker you’ll want to call to make your lethal purgatory particularly involving is the Detroit-born Vincenzo Natali. A former animation storyboard artist for EEK! THE CAT and TALES FROM THE CRYPTKEEPER (and later the live action Canadian werewolf classic GINGER SNAPS), Natali would announce himself as one of the region’s most interesting genre filmmakers with 1997s CUBE, a razor-room set tale of paranoia that set the critically acclaimed tone for Natali’s involving psychological stress to come, from a corporate spy trying to recapture his consciousness in CYPHER to friends dealing with an endless void of NOTHING and two genetic researchers who quite intimately imprison their creation in SPLICE.

While weird science has played a big part in Natali’s intelligently stylistic oeuvre, the filmmaker now plunges into the outrightly supernatural with perhaps his best, and most emotionally affecting exercise in clawing one’s way out of a prison with HAUNTER. For even if the neo-Goth teen Lisa (Abigail Breslin) seems to be in a happy 80s-bound home with her family, their repetitious lives always begin and end the same way with an alarm clock (though thankfully minus “I’ve Got You Babe”). But as she grouchily does her best to drift off a pre-determined course that’s made her realize she’s not among the living, Lisa discovers a far more horrible force at work in her confinement, a Pale Man (Stephen McHattie) who promises to change her dull routine in the most terrifying way possible.

Yet even this small plot description doesn’t yield a fraction of the terrific surprises that lie within the home-bound universe of HAUNTER, as Natali creates what just might be his most impressive puzzle box of a movie, proving him as a genre filmmaker who’s work is anything but the same old, closed-off thing.

ASSIGNMENT X: A lot of your movies like CUBE, NOTHING and CYPHER are essentially Chinese puzzle boxes that revolve around navigating tight surroundings, or memory. How does HAUNTER fit into that configuration? 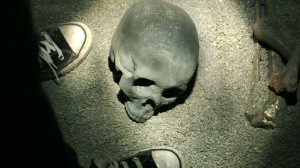 VINCENZO NATALI: HAUNTER is a very intricately designed piece of architecture, and quite unconventional in the way it’s structured, if you really thought about it. It doesn’t follow the Syd Field rules of how a screenplay is supposed to be constructed. But I have to point out that HAUNTER is entirely screenwriter Brian King’s creation. It’s a real gift to get to direct it.

AX: With movies about ghostly self-recognition like THE OTHERS, the audience is often way ahead as to the deceased’s predicament. How early on in HAUNTER did you want to give that away?

NATALI: I think we assumed that people would go into HAUNTER knowing this, because that idea is the conceit of the whole thing. But if you went into the movie not having an idea of what it’s about, I think you’d know what’s going on by about fifteen minutes into it. That’s because from the very beginning, Lisa knows she’s dead. But her parents don’t, and that’s where it’s really interesting. For as much as HAUNTER is a ghost story, it’s just as much of a parable for adolescence, because that’s how every teenager feels. They know the truth about the world, but their parents have no idea what’s going on.

AX: As you did with the even more confining CUBE, What’s the trick to making “stagebound” setting like HAUNTER’s so involving, and enveloping?

NATALI: I think you have to treat these movies like you would symphonies, in so much that it’s always about creating variations on a single theme. One of the things that enamored me so much about Brian’s HAUNTER script was that he took what was a very basic and claustrophobic idea and expanded it into a kind of universe. I love the notion that while it’s a “haunted house” movie, it’s also a haunted labyrinth, which is composed of many strata of periods of time. Lisa is like Alice in Wonderland, a character who has to discover and negotiate her way through this world within her house. 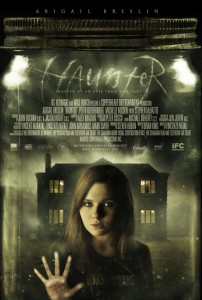 AX: You could almost describe HAUNTER as a ghostly GROUNDHOG DAY in that way. Like that film, did you want to have any kind of surreal humor, while still making HAUNTER scary and suspenseful?

NATALI: HAUNTER is especially funny for anyone who grew up in the mid 1980s, which is when Lisa’s family was killed. So we tried to be very truthful and accurate to that time to the best of our abilities. There’s a lot of humor that comes from those cultural references. Then there’s an absurdist comedy that takes place within these very domestic scenes between a happy suburban family, when we know that they’re all in fact dead, having been slaughtered on the same night. That gives HAUNTER a Louis Brunel-like surrealism that creeps in around the edges. And when I looked into other haunted house movies and ghost movies, it became evident to me that as much as they are about the supernatural, they’re also sort of about the “sur” natural, if I could make up a word. They’re about what lurks underneath the surface, and that’s very interesting stuff.

AX: Horror movies always seem to work better with strong female leads, and Lisa’s character is a particularly dynamic one in HAUNTER as she grows to meet the challenge of a villain who seems to be death himself. What do you think that having a smart, believable teen heroine gives to the movie?

NATALI: I think it’s fun to have someone who might not be physically formidable defeat something that is monumental and evil. In the movie, Lisa plays Tchaikovsky’s “Peter and the Wolf” on the clarinet. She is most definitely Peter, and The Pale Man is definitely the wolf. That’s the archetypal story we’re telling, because we always relate to the underdog. And it’s fun seeing this teeny little girl becomes empowered. Abigail Breslin is excellent in that way. She makes her character very real and human. 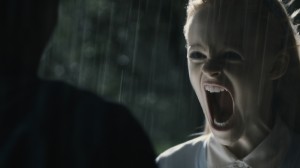 AX: I’m a big fan of Stephen McHattie from movies like PONTYPOOL and THE TALL MAN, and he’s at his villainous best here. What was the trick to differentiating his basement-dwelling “Pale Man” from a Freddy Krueger?

NATALI: I think his Pale Man is a little more reserved than Freddy. The beauty of Stephen is that he doesn’t need special effects makeup. He just has this magnificent face. It tells you about the promise of what he might do, rather than actually seeing something portrayed in an explicit way than makes him frightening. You really sense the evil in him without Stephen actually doing very much. He doesn’t arch his eyebrows, or guffaw the way that Freddy might. He’s playing a much more realistic kind of evil I think.

AX: You don’t often get a lot of concept and dialogue driven movies in the genre, especially when dealing with what l his character represents.

NATALI: I went in vowing that I would not spill a single drop of blood in HAUNTER. And that was partly because I didn’t want to betray the tone of the film. If you look at the great haunted house movies like Robert Wise’s THE HAUNTING or Jack Clayton’s THE INNOCENTS, the suspense and fear are completely generated by the atmosphere. They’re not driven by gore. In fact, if you try to inject something really gory into those movies, it would deplete the scariness of them. So I used that as my guiding light as to how I wanted to approach HAUNTER.

AX: Alex Khaskin’s score also adds quite a bit to HAUNTER’s atmosphere of dread and discovery.

NATALI: Alex is Russian, and lives in Toronto. He’s an amazing guy with a background in jazz.  It’s the first time I’ve worked with him. I loved the music because, like the movie itself, it’s a hybrid. The score has classical, electronic, modern and contemporary orchestral influences. And then it will have this crazy Russian thing going on. The theme itself is almost like Erik Satie. It’s very impressionistic and delicate, while there are other moments that devastating and quite experimental. Alex is probably the most versatile composer I’ve ever worked with. It seems like he can do just about anything. And it seems like he does it on something that looks like a Commodore 64! 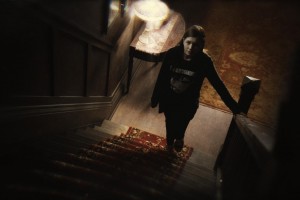 AX: Your films are made in Canada, which has always been a home for great genre movies since the days of Bob Clark’s DEATHDREAM and David Cronenberg’s THEY CAME FROM WITHIN. What do you think makes your horror locale stand out?

NATALI: I’m a little nationalistic, as I want my movies to be recognized as Canadian movies. Because there is a certain flavor to Canadian horror, which partly comes from the environment, and an “interior” way of approach the story. As the truth about what happened to these characters comes to light, we realize the true evil is seeded from within, not a threat from outside the house. There’s also something about the family being isolated by an endless mist in the film, which could also be the tundra somewhere else. I grew up in Toronto, which gets very cold and isolated in the winter. That’s ripe for horror stories. David Cronenberg is iconic as the great Canadian horror director, and he really captured that essence. You’d see it in Bob Clark’s BLACK CHRISTMAS, and you’ll see it in a lot of contemporary filmmakers. I’m excited, because I just produced an anthology horror TV series here called DARKNET, which has a lot of young talent. There’s a wave of amazing new horror directors coming out of Canada. It’s almost like an epidemic! So that bodes well.

HAUNTER premieres in theaters and on VOD on October 18th