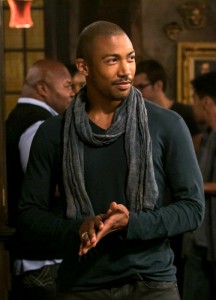 In the new vampire show THE ORIGINALS, a spin-off from THE VAMPIRE DIAIRES, Charles Michael Davis stars as Marcel, a vampire sired by Klaus Mikaelson (Joseph Morgan), one of the original vampires, hence the name

In the first episode, “Always and Forever”, it opens where Klaus returns to New Orleans, a city that was built by Klaus and his family, but Marcel is now the King of the Quarter after the Mikaelson’s had to leave the city so their father wouldn’t find them.

Sitting down with Charles at the CBS/CW/Showtime TCA Party in August to talk about his character and the show, although at that point they had only filmed the pilot it was interesting to hear his thoughts on the show.

ASSIGNMENT X: Talk about your character, Marcel, as your character is not a nice person really? There is something so conniving about him?

CHARLES MICHAEL DAVIS: Not on screen, but in person I am a very nice person! Laughs

AX: But Marcel is so arrogant.

DAVIS: Yeah, but he’s charming and diabolical and he has a lot of tricks up his sleeve. He’s a fun loving guy and you don’t get to the position of ruling a city of New Orleans without being able to enforce those rules. Everyone on the show has human issues as you see with Klaus, and Marcel has his own human issues that get in the way.

AX: Klaus was your sire?

DAVIS: Klaus yes. So there’s that bond…they are like brothers, but it’s also a father and son relationship.

AX: Klaus is going to trying to steal everything back from you, and as he states in the first episode, he wants it back as you had built everything up that he always wanted. You haven’t filmed any of the episodes yet, correct? Only the pilot so you don’t know what might happen?

DAVIS: We are starting on episode 2.

AX: Have they told you anything about what might happen?

DAVIS:  The whole show is geared to a war that will happen eventually. You see with the witches and the werewolves everyone is being subjugated. Everyone is being oppressed and each has come from being enslaved in a way, because Marcel enslaves part of the community and now he has to keep fighting against protecting his city.

AX: Because Klaus is back?

DAVIS: Yes, so there’s a threat everywhere and there are also people that are plotting against Klaus and that is what brings him to New Orleans. So we are all watching our backs and preparing for war.

AX: In the pilot you killed the witch that had what he needed?

AX: You are all vampire and Klaus is a hybrid? So he would be stronger than you?

DAVIS: More vulnerable because a werewolf bite can kill a vampire within I think less then two days. Also they are immortal. They are very tough to kill it takes like a special stake.

AX: What did they explain to you when you went in for this role? When you got the script and read it? Did you always want to play a vampire?

DAVIS: I always thought it would be cool. If there was ever a vampire movie that came out I would watch it…anything. So when I got it (the script) I went and did some research. It’s a little bit of a new world that is separate as it is not Mystic Falls, but has the same rules as The Vampire Diaries, so I had to learn what verbane was and things like that. It wasn’t too much research needed on my part as my character is pretty much on the page for me and when I went to talk to Julie (Plec) I found out a lot more. So after the first table read I discovered a fuller world.

AX: Talk about the makeup?

DAVIS: To get fitted for fangs…it was quick.

DAVIS: They are computer generated.

AX: Even when you start to change?

AX: How boring, so you don’t have to go through much makeup then?

DAVIS: You don’t have to do all that and it’s actually nice that way.

AX: Have you made a back-story up for yourself? Since you’ve been there so long you would have been there when Klaus came back with Stefan [Paul Wesley] who was the ripper at that time.

DAVIS: Those things will be explored with flashbacks. For me, I’ll ask about the relationships that already exist with my regular cast mates so it will help me when I am interacting with them. If Stefan ever appears on THE ORIGINALS then I’ll probably try to figure something out, but right now the back-story for me is about my upbringing, my turning into a vampire. Personally what pain I carry…what am I looking to prove…or what am I lacking as far as love in some certain form.

AX: So they will eventually show the back-story of how you met Klaus and why you were turned?

THE ORIGINALS airs Tuesday nights on THE CW