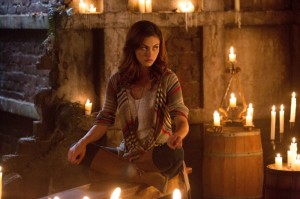 The good news for fans of THE VAMPIRE DIARIES who will watch the premiere of its spin-off, THE ORIGINALS – the opening episode, “Always and Forever,” is almost all new material, rather than simply a reworking of the DIARIES episode “The Originals,” which followed Klaus (Joseph Morgan) to New Orleans, with brother Elijah (Daniel Gillies) hot on his trail. The bad news – nearly the first twenty minutes of the new show is solid exposition.

As DIARIES viewers know, Klaus and Elijah are two of the first, that is, “original” vampires – their mother made them and their father virtually immortal, but also gave them a thirst for blood. Klaus, however, is a vampire/werewolf hybrid, the product of an affair between his witch mother and a werewolf. Klaus’ bitterness over this and the angry rejection by the man who raised him has caused him to treat his siblings rather badly over the years – he keeps putting them into supernatural comas by stabbing them with special daggers. Elijah, who puts a lot of stock in family, is inclined to forgive this – sister Rebekah (Claire Holt), who stays inMysticFalls for the duration of “Always and Forever,” is more inclined to understandably hold a grudge.

It turns out that Klaus used to rule New Orleansand (according to the series) actually helped found the city. However, a hundred years ago, he ran out of town, pursued by his stepfather (who has since been killed on DIARIES). Klaus’ protégé Marcel (Charles Michael Davis) has taken over the French Quarter and is now the local king. Unlike Klaus, he’s found a way to command loyalty from his fellow vampires and has absolute control over the local witches. Klaus is very jealous and wants to know the secret of Marcel’s magical power – Marcel seems happy enough to see Klaus, but wants Klaus to respect his rule. Klaus, as we know, has no respect for anyone, but feigns friendship because he wants to acquire what Marcel now has. There’s also some very significant fallout from one of Klaus’ flings (no, not the one with Caroline) that also embroils Elijah.

It’s somewhat hard to judge THE ORIGINALS on the basis of “Always and Forever,” since presumably future episodes will assume the audience is reasonably caught up and flow forward instead of cramming several seasons’ worth of information into illustrated talking points for a startlingly long stretch.

Something that looks like an immediate potential problem is that, while Morgan is a charismatic actor, Klaus is a pretty hateful character – anyone who makes Damon Salvatore look like a good guy by contrast is someone with major issues. Even though “Always and Forever” doesn’t want to borrow VAMPIRE DIARIES footage, it arguably should have retained the original introduction of Marcel, killing it with a karaoke song at his club. Davis has a lot of presence, but here we meet Marcel being a generic badass, just one more vamp who’s top dog for the moment. The Klaus/Elijah dynamic right now is very similar to the Damon/Stefan relationship on the parent show, except that, again, Damon never did to Stefan the things Klaus has done to Elijah, and Stefan doesn’t seem nearly as hapless in respecting his sibling bond as Elijah does. Then there’s another pivotal non-vampire character from DIARIES, who doesn’t readily invite sympathy due to her past awful acts.

At least in this episode, Rebekah seems so sensibly removed from the situation that we’re intrigued as to how she’ll be drawn into the action (since she’s listed as a series regular, it seems likely she’ll turn up in New Orleans before long).

THE ORIGINALS has potential, since its characters are liable to do anything, which is always an interesting attribute. However, curiosity only goes so far, and sooner or later, we’re going to need a reason to not only want to know what might happen, but also a reason to care. At the outset, none of the regular characters provide that.