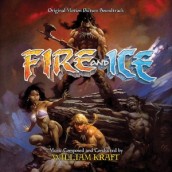 Buysoundtrax has been in the habit of refurbishing many beloved genre scores from the 80s, most recently among them Tangerine Dream’s NEAR DARK, Richard Stone’s SUNDOWN and David Whitaker’s THE SWORD AND THE SORCERER. But amidst the decade’s particularly beloved sword and sorcery genre, perhaps no score is as savagely majestic, or unsung as William Kraft’s rippingly symphonic work for 1983s FIRE AND ICE. Ralph Bakshi took his passion for live action-to-animation rotoscoping that he’d begun on WIZARDS to its most wonderfully sexist extremes for this collaboration with Frank Frazetta, a he-man artist who’d turned his visions of barely-clad barbarians and princess into fine art. While this enjoyably clichéd picture would basically be loincloth fiesta of blood and boobage, Kraft would add significant musical weight to the proceedings with a score that can proudly stand upright with Jerry Goldsmith’s PLANET OF THE APES as a bravura exercise in musical primitivism.

FIRE AND ICE starts off with the kind of wonderfully swaggering theme that spells out the sword-wielding stuff of legends, Kraft swiftly leaps into the man-ape jungle with Stravinsky-esque savagery, modernistic brass effects battling it out with jagged strings for a feeling that’s pure, unkempt muscle-on-muscle. Yet this “American impressionist’s” approach is always melodically bold for all of its energetic anger, not only conveying some violent time-lost land but also more knightly nobility. Kraft also hears beyond his brawny orchestral weapons and charging military rhythms to bring in unexpected instruments like the piano, conveying a true sense of lithe beauty. While FIRE might not have had the budget of LORD OF THE RINGS, one can also hear the mythmaking impressionism that composer Leonard Rosenman gave to Bakshi’s most ambitious animated fantasy. Both are after the same clanging, roaring sense of grandeur, but its FIRE that just might win with the sheer, often terrifying and exhilarating musical force on hand that can heroically smite any man-ape, or musical approximation as one.

The robust playing of a Hollywood studio orchestra and the sometimes surprisingly pastoral orchestrations of Angela Morley (composer of WATERSHIP DOWN) give a tremendous vitality to FIRE AND ICE, which makes it just a bit sad that this would be Kraft’s scoring swan song before moving onto a career conducting for such films as DEAD AGAIN and CARLITO’S WAY. But as a testament to all things great from an era where swaggering scores like CONAN THE BARBARIAN, KRULL and CLASH OF THE TITANS warred with each other to create the greatest impact on the imaginations of their breast and sword-obsessed teen viewers, FIRE AND ICE stands more than ever as an unsung masterwork in the genre for a composer who should have done way more work. Buysoundtrax’s nicely designed, illustration-filled booklet has Randall D. Larson’s extensive liner notes (including a great new interview with Kraft) pay due piety before FIRE AND ICE’s blazingly percussive altar to all things magical, nubile and blood-lusting, socking its elements across in a manner at once pubescent and sophisticated, much like the combined spell of the otherworldly Brooklynites Bakshi and Frazetta.

Clink on the link to Purchase the FIRE AND ICE soundtrack