Exclusive Interview: Michael Sheen on the joys of MASTERS OF SEX 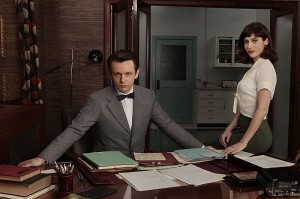 William Masters and Virginia Johnson are now known as two pioneers of research into human sexuality. In 2013, such research is considered normal, but when the duo met up in 1957 and began their study – at that time, Johnson was Masters’ research assistant – it bordered on the unthinkable. Showtime’s MASTERS OF SEX, Sundays at 10 PM, developed by Michelle Ashford based on Thomas Maier’s nonfiction book, chronicles the beginnings of the complex relationship between Masters and Johnson, as well as how they went about their research and what they learned. Michael Sheen plays Masters and Lizzy Caplan plays Johnson.

Sheen, originally from Gwent, Wales, has played all kinds of roles. He’s portrayed former British Prime Minister Tony Blair three times – in THE DEAL, THE QUEEN and THE SPECIAL RELATIONSHIP – real-life British football coach Brian Clough in THE DAMNED UNITED, the traumatized father of a disturbed teenager in BEAUTIFUL BOY, werewolf leader Lucian in the UNDERWORLD films, the villainous vampire Aro in the TWILIGHT saga, David Frost in FROST/NIXON (a role he originated on Broadway before doing the film version) and a wide range of other characters.

This interview is a compilation of a one-on-one interview conducted at a party thrown by CBS and Showtime for the Television Critics Association press tour (that’s the “exclusive” part) and answers Sheen gave the next day at a Q&A session for MASTERS OF SEX.

ASSIGNMENT X: How did you become involved in MASTERS OF SEX?

MICHAEL SHEEN: I just got sent the pilot episode script and read it and I thought it was very good, very interesting, but they were going to shoot it in New York, and I said, “Well, I can’t even think about it unless you shoot it in L.A.” and they said they would shoot it in L.A. and then I thought, “Do I want to do something that I’m going to play the same character in for a very long time, potentially?” And I weighed up all the different options and I did some research about them and about the character, to see what sort of storyline arc there might be, and ultimately, I thought it was the right thing to do. But it was a risk. And then doing the first season, I’ve really enjoyed it, it’s been terrific, so everything that I was concerned about were actually the most exciting things about doing the project.

AX: For awhile now it seems like you’ve been bouncing back and forth between historical characters, a lot of Tony Blair obviously, now William Masters, and the supernatural, where you play werewolves and vampires. Would you like to play somebody who’s human and contemporary and fictional?

SHEEN: Well, I play all kinds of people. I don’t know what you’ve seen or not. From my point of view, I’ve played all kinds of different things. I don’t know what people have seen, so if you’ve only seen certain things, then you’re going to think that’s what I do, but I do all kinds of different things, so there’s no particular template for me. I get sent scripts – if I like them, I’ll do them and if I don’t like them, I won’t do them. That’s it. It doesn’t matter what genre it is. I tend to want to do things that are different for me and I think are going to challenge me in some way, but ultimately it’s stuff that I would like to see and things that excite me in some way.

SHEEN: Well, he’s a fascinating character, he’s very complex, and being able to explore the character of twelve hours of one season, rather than two hours of a film or three hours of a play or something is a new challenge for me. I’ve never done that before. And he’s a very different character to the sort of characters I’ve played before; there’s very little going on on the surface, it’s all under the surface. So that’s kind of a challenge as well. So I thought there was a lot of stuff I was interested in doing that would be different to what I’d done before.

He’s sort of a mystery to himself, really. He has so many locked rooms inside himself that he has to tread very carefully and make sure that he tries to control his environment so much. So I think that creates what you might call prudishness, but [it is] actually sort of a locked-down desire to keep control. I don’t think that’s necessarily typical of everyone in the society at that time. Obviously, thinks have changed in many ways since the Fifties when the show is started, in terms of sexuality and how much access we have to images of it and information about it. But the same problems always apply. It doesn’t matter whether we know a lot more about sex now or there’s a lot more access to it. The same problems of intimacy, of dealing with other people, of connecting and being vulnerable with other people, which is what the show is ultimately about, still applies now, I think.

AX: Did you do a lot of research on Masters once you’d decided to do the series?

SHEEN: Yeah. If you’re playing a real person, then you’ve got a responsibility to find out everything you can about that person and then try and make some sort of imaginative connection with them, so yeah, I read everything that there was to read about him and then sort of took it from there, really.

AX: What was the most interesting thing about him for you?

SHEEN: I don’t know. I don’t reduce people to the most interesting thing about them. I think people are far more complex than that, really, so I’m not really into that kind of reductive way of thinking about human beings.

AX: There’s a lot of sexual activity within MASTERS OF SEX, both within what might be considered “normal” circumstances and for the purposes of clinical study. Is there a difference as an actor in playing those scenes?

SHEEN: Without giving too much away, there is a scene later on in the season where I have sex, and what’s really difficult is having sex where it’s I think what you are talking about, which is where it’s not coming out of a conventional scene where it’s two people who are attracted to each other and go back home and have sex in the bed – where it’s a scientific thing where you are supposed to be doing it and not having any kind of emotional response, maybe not even looking at the person you are having sex with, covered in wires and all of that stuff. That is really difficult because, partly, maybe this is a reflection on me as an actor. I’ve never done a conventional sex scene in my life. It’s always f***ed up in some way. Whether I’ve got chocolate powder all over my face and I’m barking or I’m hanging off a cliff as a mountain lion or something. The first sex scene I ever did was with Stephen Fry in a film about Oscar Wilde [WILDE] where I rode him like a bucking bronco. So I don’t really know what a conventional sex scene is like, to be honest. But it’s very peculiar to try just as an actor, the mechanics of – you usually have sex with someone in a scene the day you’ve met them on a film. So it’s always kind of odd. And the way you get through it in a way is by aping the way people have sex normally, making the noises and doing the movements and all of that. If you suddenly can’t do any of that, that’s incredibly exposing.

AX: Do you have any concerns about how you look in these scenes?

I personally have a problem when I watch shows or films where I feel like the bodies you see are just not the bodies that people had at that point, or that character would have. I think it’s important to not let personal vanity get in the way of authenticity. The character confers the needs of the story, he confers the needs of those things. I think it’s very easy to fall into that, but I think it’s important for me personally, anyway. That’s my excuse for why I don’t look very physically attractive in the show.

AX: It’s convincingly posited in MASTERS OF SEX that civilization as we know it might be quite different if not for Masters and Johnson’s research …

SHEEN: I think so. I think when he first started doing his study, there was no real scientific evaluation of sex and its effects on the human body at the time, so when I was doing my preparation for the part, I spoke to some gynecologists who were working at the time when Masters and Johnson were around, and they said, “We had nothing to refer people to. There were no textbooks. There were no scientific studies.” [Alfred] Kinsey had done a lot of work before that, obviously, that was groundbreaking, but that was all anecdotal and based on questionnaires and that kind of stuff. So actually being able to observe people having sex was a huge breakthrough.

AX: What do you think people may get out of MASTERS OF SEX?

That’s what I learned about the show the most that we were actually doing – telling a story about how difficult it is to be vulnerable. What do you reveal about yourself? What do you try to keep hidden? And why do you try and keep it hidden? You know, sex seems to be a kind of conduit for any area that you feel shame about, anything that makes you feel different and disconnected from people. And hopefully, by doing a show about this in the way that we are trying to do it, it allows people to not feel so disconnected, a little less shameful, a little less “less” than other people. I think if it can do that, then it’s done its job.