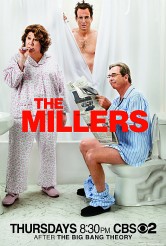 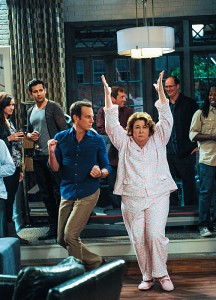 Will Arnett and Margo Martindale THE MILLERS | ©2013 CBS/Richard Foreman

For some reason – something in the water, perhaps? – the 2013 fall season has a plurality of half-hour comedies about parents who move in with their adult children, or vice-versa. Fox has DADS, ABC has BACK IN THE GAME, CBS has MOM (okay, the mom doesn’t actually move in with her grown daughter, but they begin spending so much time together that it’s a near thing) and now brings us THE MILLERS.

Will Arnett stars as local newscaster Jack, who lives in the same town as his sister Debbie (Jayma Mays), Debbie’s husband Adam (Nelson Franklin) and their daughter Mykayla (Eve Moon). When Jack and Debbie’s parents, Tom (Beau Bridges) and Carol (Margo Martindale), come for an impromptu visit, Jack unwisely mentions that he and his wife of three years got divorced three months ago – and he’s happy. This de-stigmatizes divorce for Tom, who promptly declares he’s leaving Carol. The upshot is that Tom moves in with Debbie and Adam, while Carol decides she’s going to stay with Jack.

Given that THE MILLERS was created by Greg Garcia of MY NAME IS EARL and RAISING HOPE fame, one might expect it to be a little wilder than it is. Carol’s withering criticism of Tom is so constant that we’re not surprised he wants out of the marriage; the wonder is that he didn’t leave long ago. However, contrary to dramatic convention, Carol seems fine with the split once she gets over the initial shock, so we’re not asked to pity her.

The jokes are plentiful and not mean-spirited, though some of them make us and the characters squirm. Martindale throws herself into every aspect of her role with gusto, especially a scene that finds her dancing with Arnett to “I’ve Had the Time of My Life” from DIRTY DANCING. Yes, that’s mom Carol doing a romantic dance with son Jack, yes, it’s creepy, and yes, the show knows it (Jack’s friend Deweyne, played by JB Smoove, even makes a comment to this effect). The actress brings her usual brilliant intensity to Carol, making the character so formidable that we understand why she has Jack so cowed.

Bridges has an aw-shucks charm that carries him serenely through some familiar gags about the older generation’s issues with modern technology. Arnett and Mays make good straight people.

The premise of THE MILLERS is neither novel nor automatically hilarious, but it has its memorable moments. It at least avoids a lot of the pitfalls of some of its contemporary half-hour freshmen – this may be damning with faint praise, but the set-up is liable to make people feel more sorry for the characters than intrinsically amused by them. Still, fans of Martindale, Bridges, Arnett and even Mays (who has less to do, at least in this episode, than her peers) will want to turn in and the DIRTY DANCING routine is liable to stick with the viewer for a long time afterward, for good and for ill.