This is the End review Blu-ray 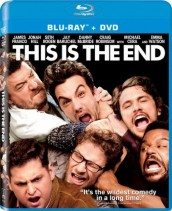 (c) 2013 Sony Pictures Home Entertainment
THIS IS THE END
Reviews

THIS IS THE END Highlights this week in Blu-ray, DVD and VOD Releases 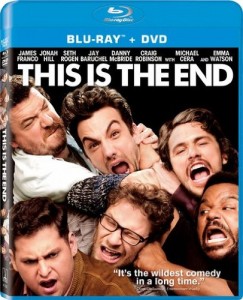 THIS IS THE END | (c) 2013 Sony Pictures Home Entertainment

THIS IS THE END – If you ever wanted to see a whole bunch of celebrities meet their end in horrible ways this is definitely the movie for you. THIS IS THE END stars numerous celebrities all playing over-the-top versions of themselves (or at least hopefully they are). James Franco, Jay Baruchel, Jonah Hill, Seth Rogen, Danny McBride, Craig Robinson, Michael Cera, Emma Watson and many more play themselves in this comedy about the best end of the world rapture ever. When things go to hell – literally – these actors band together to survive the devil and his minions reaping havoc throughout Los Angeles. Huddled together in Franco’s mansion house they discover that those good people in the world are taken to Heaven and those left are forced to fend off the army of evil. But by sacrificing or doing a good deed, these terrible people known as actors can actually make it to the pearly gates too.

What follows is some hilarious moments as we learn certain tidbits (not sure if they are true or just added for drama) about the relationships between these actor friends as well as the bad deeds they have done to keep them from the rapture. While the movie plods along in some spots, there is enough amusing points to keep it going not to mention seeing people such as Michael Cera meet their end is worth the price of admission. The Blu-ray version also gives more special features than the DVD version which is always cool but also looks that much better. Definitely a fun time. 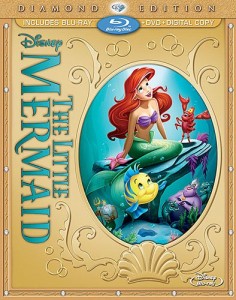 THE LITTLE MERMAID DIAMOND EDITION – The Disney roll out of its classic catalog continues with one of the most popular films of all time converted to high definition for the first time. THE LITTLE MERMAID is one of the modern Disney classics that won a slew of Academy Awards about a free-spirited mermaid that longs to be part of the human world. When she trades her voice to a sea witch for a pair of legs, she meets a human man that wins her heart but the only way she can get it back is by finding a kiss from true love. It is a great tale and with this being the first time on Blu-ray, restored and transferred using the latest technology, looks amazing. It may be the best the film has looked in many years, maybe the best it has ever looked. This edition includes all the legacy special features of the original release as well as a DVD and digital version so you can take it on trips with you using a tablet or smartphone which is really handy. If you have young girls that love princesses, this is a must have or a must buy for Christmas. 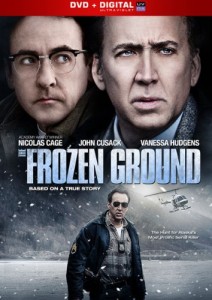 THE FROZEN GROUND – Based on actual events, THE FROZEN GROUND follows the investigation of Alaska state troopers search for the deadliest serial killer the state has ever known. Nicolas Cage stars as Jack Halcombe the lead investigator into the case as he digs up as much information about the serial killer as possible and linking more than 13 years of killings of mostly street hookers. When one hooker escapes (played surprisingly well by Vanessa Hudgens) the clutches of the killer, Robert Hansen (John Cusack), she is a pivotal piece of the puzzle and puts Jack finally on the trial of finding him. But with other people in play protecting the killer, the escaped hooker is constantly in danger and Jack races to not only protect her but uncover evidence that will link Hansen to the killings – a tough job considering all of the murders took place in the frozen wilderness outside of major cities. This isn’t a bad flick as it keeps the pace of the investigation and the unfolding sanity of Hansen going throughout. Worth checking out on Netflix at least. 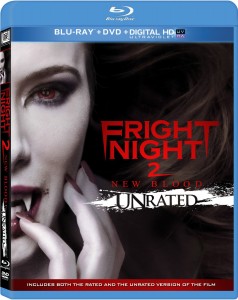 FRIGHT NIGHT 2: NEW BLOOD – The first thing you should know about FRIGHT NIGHT 2 is that isn’t at all as bad as you might think it may be considering this is not a sequel but another re-imagining of the classic 80s film of the same name that was just a short few years ago re-imagined starring Collin Farrell. This one takes Charlie, Evil Ed and Amy to Romania where they are studying aboard and run into a sexy professor (played really good by Jaime Murray) that is more than meets the eye. After Charlie sees some odd behavior from Professor Gerri Dandridge he follows her and sees her meeting with strange people that keep disappearing. He finally sees her bath in the blood of a poor girl transforming her old appearance into a young hot one. There are some interesting ideas here the big one being that Elizabeth Bathory was really just one of the first vampires of lore and has been bathing the blood of young women as well as drinking blood to restore her vitality. But what it lacks is a strong presence of Peter Vincent who is anything but strong in appearance or action (which is natural for this film but even more so here). Still not a bad horror flick but nothing near what the original sequel was, which obviously means it pales in comparison to the original. 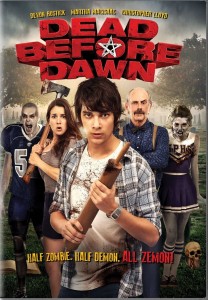 DEAD BEFORE DAWN – The zombie comedy craze continues. There are a number of ways zombies crop up: chemical spill, apocalypse, act of God, a diseased monkey, acid rain or voodoo curse. I’m sure there are many others but this one centers on the old fashioned black magic spirit idol variety. Once a group of high school troublemakers knock over a cursed idol they were sworn not to mess with, they idiotically set loose a crazy curse on themselves. This curse involves the kids looking people in the eye, which causes the other person to kill themselves and come back as a zombie sworn to kill the group by giving them deadly hickeys. Yeah, DEAD BEFORE DAWN is a weird one. The only way to reverse the curse is by gathering a set of strange items and reseal the black magic in a another container. There are no scares here as it is pure slapstick with wild stuff happening left and right (as if the premise alone isn’t silly enough). Still, like most zombie comedies it is amusing and has some laugh out loud moments.

Article Source: Assignment X
Article: THIS IS THE END Highlights this week in Blu-ray, DVD and VOD Releases