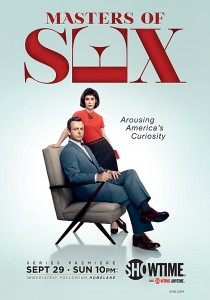 Showtime’s MASTERS OF SEX, Sundays at 10 PM, has already been renewed for a second season. The series, which begins in the 1950s when the main characters meet, charts the working and personal relationships of real-life sex researchers William Masters, played by Michael Sheen, and Virginia Johnson, portrayed by Lizzy Caplan.

Executive producer/show runner Michelle Ashford, whose other writing credits include THE PACIFIC and JOHN ADAMS, created MASTERS OF SEX based on Thomas Maier’s nonfiction book. At a Showtime-sponsored event for the Television Critics Association, Ashford talks about mastering this unusual subject matter.

ASSIGNMENT X: How much, if at all, did you have to invent to give MASTERS OF SEX a dramatic backbone and how much was already present in the historical record?

MICHELLE ASHFORD: Thankfully, very little [had to be invented]. Their story is fascinating and we had a biography to work form, Thomas Maier’s book, and so we’ve stuck to the facts very carefully. Certainly, we’ve fudged none of the research. We’ve established some character,s but their lives were so complicated and interesting, we’ve had to establish very little, actually.

AX: There’s a lot about women’s sexuality in MASTERS OF SEX. Is the show crafted to particularly appeal to women?

ASHFORD: It’s not by design. In an odd way, we’re taking our cue from their research, because they were scientists and just out to collect physiological data, but what the data revealed really ended up supporting women as sexual creatures, and that was just because the facts were just saying that. And so they didn’t design it to be for women, and yet a lot of the work ended up being incredibly beneficial and liberating for women.

ASHFORD: Well, you know, when we read this biography, we were like, “Oh, our work is just done for us.” [laughs] Because yes, you can’t deny the fact that the subject matter is going to make people sit up and listen. And yet, it’s just about such deeper things, so yes, I think it helps that it’s about sex, but I think really so much of what women had to negotiate in that day and age had to do with sex, and had to do with their relationship with men, and their inequality with men.

AX: The series is very rich with characters and events and observations about human behavior, but the research published by Masters and Johnson was very clinical …

ASHFORD: Their first book, HUMAN SEXUAL RESPONSE, came out in ’66. I dare you to get through it, it is so dry. But people sort of read between the lines and realized what they were talking about, so it became just explosive, and yet they were so careful to keep it so scientific that it’s hard to know when you’re reading it what exactly was going on. This is why Tom’s biography was so eye-opening, because no one actually knew what was happening in those [research] rooms, and certainly no one knew what was happening between the two of them.

AX: Although Virginia Johnson passed away in July of this year, which means she was alive while you were working on the project, you’ve said that no one on the production actually got to speak with her …?

ASHFORD: The book that Tom wrote, that was the first time she had ever spoken about any of this. And I think she really bared her soul in that book, and I think once she did it, that she was just sort of done with that.

AX: What made you so interested in William Masters as the central figure for a television series?

ASHFORD: Well, why was he, since he was a young man, so hell-bent on this study from the beginning? He did want a Nobel Prize, he did want to be famous, but I think it deeply connected to the struggles in his own life, which is he had a terrible problem with intimacy, and I think he looked at the study of sex as somehow opening a door for him as a way to understand himself in relationship to intimacy.

AX: Did he really think he could get a Nobel Prize by investigating sex?

ASHFORD: Well, yeah, because no one had ever done it. As you see, he was wrong. It didn’t work out.

AX: How is Michael Sheen to work with as a leading man?

ASHFORD: Fiercely intelligent, meticulous in his research and his approach to subject matter – in Bill’s case, it was sex, in Michael’s case, it’s acting – so they have many, many things that I think are similar. And he’s also so fun as a collaborator, because he has so much to say and he’s so into it and there’s no snobbiness about, “Oh, I’m doing TV.” He really just threw himself into it. It’s just been lovely.

AX: How big is the writers’ room on MASTERS OF SEX?

ASHFORD: We ended up with a very, very small staff of three at the end. It was me, another woman and a guy. We started off with four, but it just for one reason or another didn’t quite work out. We ended up with a very small staff. But it became kind of fantastic, because we’re so deeply enmeshed in this material that we just were breathing it every day, and we got some wind in our sails and I think got to the end in a pretty great way.

AX: How much time is taking place through each season?

AX: Will you have to use age makeup on the actors?

ASHFORD: We’re going to do a little magic trick where we move through history faster than our characters age, I think [laughs].

AX: What else should we know about MASTERS OF SEX right now?