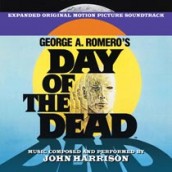 Even when outright horror movies had humor in them, composers would mostly play the often gory action straight. While DAY OF THE DEAD might amiably shamble amongst George Romero’s original trilogy, it’s John Harrison’s score that stands as the most unique of their soundtracks for this reason. Where NIGHT used library music for maximum black and white effect, and Goblin brought catchy, progressive rock color to DAWN‘s entrail-laden shopping mall, it could be argued that Harrison was the composer who truly got Romero’s subversive satire, even if this sequel was claustrophobically set in a decidedly non-consumerist military mine complex. For what Harrison heard was a Reggae-Calypso beat of all things, a brilliantly sardonic approach that was actually far more humorous than the movie itself. Somehow, it was an island rhythm that moved in perfect time with these increasingly smart zombies.

Starting out in Romero’s reparatory company an actor in DAWN OF THE DEAD and KNIGHTRIDERS, Harrison showed an even more fearsome talent for composing in CREEPSHOW electronically replicating a 1950s B-movie horror sound that was in perfect synch with that movie’s use of stock scores. Harrison’s brilliant conceit for DAY OF THE DEAD was using its tropical sound to hear inside the mind of heroes who’d much rather be hanging out in the Caribbean, as opposed to being stuck with a bunch of army loonies. While their aggression brings out a dangerous, militaristic march-percussion, there’s also much ethereal beauty to DAY‘s score, its drifting melodies reverberating within an immense underground space that holds little safety for all of its isolation. Harrison’s ideas as are much conceptual as they are thematic, while also giving the more obvious music scares and shock effects their due for when the zombies will of course invade.

La La Land’s special edition soundtrack gives even more space to Harrison’s score, revealing its full, inventive complexity, especially for the score’s more ruminative moments, while also offering DAY‘s original release on a second disc, which offers its own disco spin on the main title. DAY OF THE DEAD confirms the distinctively inventive electronic beat of an artist who’d later go on to direct DUNE  and LEVERAGE for TV, but whose unique horror sound remains missed in a genre that could use more of his bitingly inventive approach.