©2013 The CW/Mathieu Young
Daniel Gillies as Elijah, Phoebe Tonkin as Hayley, Charles Michael Davis as Marcel, Joseph Morgan as Klaus, and Claire Holt as Rebekah in THE ORIGINALS - Season 1
Interviews

Exclusive Interview: Julie Plec vamps on THE ORIGINALS and THE VAMPIRE DIARIES 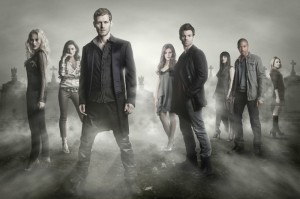 Claire Holt as Rebekah, Phoebe Tonkin as Hayley, Joseph Morgan as Klaus, Danielle Campbell as Davina, Daniel Gillies as Elijah, Daniella Pineda as Sophie, Charles Michael Davis as Marcel, and Leah Pipes as Cami in THE ORIGINALS - Season 1 | ©2013 The CW

Julie Plec has her hands full executive-producing series for the CW. She’s still on THE VAMPIRE DIARIES, the series she and Kevin Williamson developed from L.J. Smith’s novels, now entering its fifth season Thursdays at 8 PM. Plec is also one of the executive producers on THE TOMORROW PEOPLE, a thorough going revamp of a British series about teenagers with some powers that may indicate a change in human evolution, which premieres next Wednesday at 9 PM. Last but not least, Plec is both creator and executive producer on THE ORIGINALS, the VAMPIRE DIARIES spin-off that premieres Thursday October 3 at 9 PM following its parent show’s Season 5 opener. THE ORIGINALS thereafter moves to its regular slot on Tuesdays at 8 PM, beginning October 8.

In THE ORIGINALS, ancient – but youthful-looking – and powerful vampire/werewolf hybrid Klaus (Joseph Morgan) finally gives up on terrorizing the denizens of Mystic Falls in THE VAMPIRE DIARIES and heads back toNew Orleans, where he once ruled like a king. However, Klaus finds that his vampire protégé Marcel (Charles Michael Davis) is now running the show in the Big Easy, wielding a supernatural authority that is new even to the knowledgeable old-timer. Klaus’ vampire brother Elijah (Daniel Gillies) arrives to offer sibling assistance and their sister Rebekah (Claire Holt), initially reluctant to get involved – Klaus does have this nasty habit of putting her into a vampire coma when he thinks she’s out of line – eventually joins the family. Speaking of family, Klaus is also dealing with the possibility that he may soon be a father.

At a party thrown by CBS for the Television Critics Association, Plec discusses all of her shows, starting with her new baby.

JULIE PLEC: You know, I don’t think you ever think of doing a spinoff outside of fantasy realm [inside the mind] until you realize that there are elements of your show that are deserving of their own story. In the beginning of THE VAMPIRE DIARIES, we knew we wanted to get to Klaus, because he was a villain in the books, but we just assumed he would be a villain that we would deal with and then vanquish in the body of THE VAMPIRE DIARIES. And so it was about the time when we started in Season 3 meeting Rebekah and we’d already met Elijah and we knew Klaus, and we thought, “Good God, we’ve got three magnificently talented people here, and a thousand years’ worth of stories to tell about this family.” And we started thinking about a possible spinoff and then in the episode “Ordinary People,” which introduced their back story, we started thinking, “Oh, my God, there’s so much great television here.” And then it was Episode 314, “Dangerous Liaisons,” where the Original mother [the witch Esther, played by Alice Evans] threw the party, where we had the entire family standing on the balcony staircase, posing for a picture, and our director took a picture of all that cast and I texted it to [Warner Television chief executive] Peter Roth and I said, quote-unquote, “The Originals,” and he wrote back, “I love it already.” And the spinoff was born from that

AX: We have a number of shows with leads who aren’t wholly sympathetic, but Klaus has been particularly malevolent on occasion. Can Klaus sustain his essential Klaus-ness and still be the lead?

PLEC: Yeah. I mean, Klaus is a troubled [person] who spent a thousand years ruling with a reign of terror, making everybody so afraid of him that he became almost an urban myth. But conversely, he was also trying to rebuild his family and find a group of people that he could build a community with. And so he’s a very, very, very complicated individual with a huge duality, and the beauty of the show being about the Original family and other characters is that we get to explore the duality of Klaus. He can be both hero and villain. He can behave beautifully and horribly all in the body of one episode, and he will be very naughty and very delightfully with equal measure as we go deeper and deeper into the series.

AX: Is he going to buy into the pregnancy if that’s his kid?

PLEC: Well, I mean, he certainly believes the story [that he has impregnated someone]. Whether or not he has any emotional investment in it, we don’t know when we first start. Klaus is a character who believes that caring and love exposes weakness and exposes vulnerabilities, and in VAMPIRE DIARIES, he let himself fall for Caroline [Candice Accola], and that didn’t exactly give him what he wanted, and in THE ORIGINALS, he may not be so quick to admit any sort of emotional attachment to the idea of having a baby. For Klaus, it’s about – at this point – stealing back the supernatural community that Marcel has built in his absence.

AX: Is Marcel also a hero-villain, or is he a villain-villain?

PLEC: don’t think we make [an episode] in the VAMPIRE DIARIES universe where a villain is a true villain, in the same way that, in good stories, in my opinion, the villain always has a point of view that maybe nobody else understands, but for him or her it’s the most important thing in the world, and their villainy is built out of a very clear want that is usually based in an emotional passion or an emotional need. Marcel is the same way. He’s a kid who was not well-treated when he was human, he grew up in slavery days in the Civil War South and he got rescued by Klaus as a ten-year-old and raised and treated well by Klaus, so he might be doing some bad stuff, but he loves Klaus like a brother, even as he does everything he can to protect his community from being taken over by him.

AX: It looks like there might be a little bit of something going on between Elijah and Hayley the werewolf, who’s played by Phoebe Tonkin …

PLEC: There’s a moment in the presentation, which wasn’t part of the episode that aired [as part of THE VAMPIRE DIARIES’ fourth season] , where Elijah offered his jacket to Hayley, and it’s one of my favorite moments in the presentation, and in the script, because it’s such a gentlemanly thing to do, and Elijah, as we know, is a man of nobility and honor, and Hayley is somebody who’s not used to anybody giving her any care or wanting to protect her at all. So it’s a little hint of how these two people might be able to find a bond with each other as they move forward, which of course, if that happens, would be very awkward and interesting and might provide a bit of conflict within the family itself.

AX: And these shows are all about family conflict …

PLEC: They are [laughs].

AX: Are we ever going to see any of the VAMPIRE DIARIES characters who have connections to Klaus and his family – Caroline or Katherine [Nina Dobrev] or Rebekah’s friend Matt [Zach Roerig] – turn up on THE ORIGINALS.

PLEC: We get asked that question a lot, and the answer, which I apologize is nothing new, is we would absolutely like to. There are a thousand layers of logistics – scheduling, financial, creative – and anything that comes on with production that could prevent us from being able to do everything we want to do, but we certainly are trying to be able to do it.

AX: Where are you shooting THE ORIGINALS?

PLEC: We are shooting THE ORIGINALS in Atlanta, about fifteen minutes away from where we shoot THE VAMPIRE DIARIES. The upside of that is that we are right there with our family, our VAMPIRE DIARIES family, and we know the town and we know the crew and we know the world and how to shoot inAtlanta. We’re big fans ofGeorgia. The downside of course is that we’re not right in the middle of the French Quarter, so we have a lot of work to do to sell the authenticity ofNew Orleans. We will get toNew Orleans eventually and occasionally to get some great footage, but as it is, we do turnGeorgia intoNew Orleans and the French Quarter with some duct tape and a sparkle pen, and we’ll see how we do.

AX: Are you show-running both THE VAMPIRE DIARIES and THE ORIGINALS at this point?

PLEC: Yeah, I am, except I’ve also got Caroline Dries, who was the co-executive producer [on VAMPIRE DIARIES] until this year and is now an executive producer. So she’s handling a lot of the heavy lifting of VAMPIRE DIARIES because she’s earned it over four years with the show. And I’m there to help, aid, assist, support and anything she needs from me.

AX: And brief VAMPIRE DIARIES question – with Klaus out of the picture, is Silas going to be the Big Bad?

PLEC: Silas is going to be the First Bad, and I think we will meet a second and possibly even a third over the course of the year.

AX: Are you working on any other projects?

PLEC: Well, I have THE TOMORROW PEOPLE, which is also on the CW. That’s Wednesday nights after ARROW, and that, thank God, has the brilliant Greg Berlanti and Phil Klemmer at its helm, and the filmmaker Danny Cannon, who shoots some of the greatest stuff in television, so my participation is supportive and loving and pitching ideas and throwing an occasional note into the fray, but they’re doing a terrific job and I get to take a lot of the credit for it.