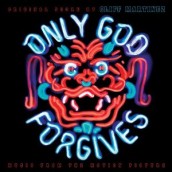 Most times, a composer’s job is to support the emotions of an actor’s performance, not become the performance. But where any other musician might be condemned for overstepping the boundaries of good taste, Cliff Martinez deserves a medal for brilliantly providing just about the only humanity for Nicolas Winding Refn’s lavish exercise in artsy sadism with ONLY GOD FORGIVES. Far more in the realm of the filmmaker’s FEAR X  than his infinitely more accessible DRIVE, Refn’s bitch slap of unending, beyond-explicit revenge is actually more of a fight club for staring. Given endless stretches of unblinking silence in between its bursts of brutality, Martinez is faced with having to fill in the feeling where the only other sound is crickets chirping. But given GOD‘s beyond-muted tone, getting too emo could only push the movie further into self-parody. Yet coming from the dojo of Steven Soderbergh, Martinez can proudly wear a black belt in conveying feeling with inventive subtlety. It allows Martinez to enter FORGIVE‘s  zombified fray with all of his Zen emotional power, the score achieving a level of hypnotic beauty that Refn’s blankly gorgeous imagery otherwise falls bloodily flat with.

Where Martinez’s work for Refn’s DRIVE was about pulsating, ethereal poetry that reflected modern LA noir, ONLY GOD FORGIVES is the dreamily sinister slow burn of a Thai opium den, with all doom-laden points directing us to the inevitable “If thine (fill in the body part) offend thee, pluck it out” biblical payback. Martinez’s trademarked Crystal Baschet instrument provides the gossamer, Oriental flavor, while dark synths waft about rumbling percussion. An ultra romantic, Herrmann-esque melody deceitfully sets up longing, incestuous sympathy for the ultimate she-devil mother. A horn, organ and drums become the terrifying roar that announce the unstoppable, machete-wielding justice of a cop who makes Dirty Harry look like Frank Drebin. But while shrieking music adds a whole level of Ligeti-esque insanity to a scene that will live in torture porn infamy, Martinez’s score is far more often the calm before the storm, especially in a grievously unfair fight with the lawman where Ryan Gosling’s drug dealer experiences the delusions of his kickboxing grandeur, which are brought low in a showdown between pulsating synths and a raging organ that’s retro ear candy for fans of 70s prog-rock horror scoring. But the best thing about ONLY GOD FORIVES is the enormous playing field of blankness that lets Martinez create one of his most delicately provocative and thematic scores, music that makes a wanton exercise in feel-bad into a work of musical poetry. For where some can only see bleakness in the human soul, Martinez finds lyricism, as ethereally twisted as it might be here.

No stranger to Southeast Asia himself, Martinez’s own, far less evil time spent soaking up its anything-goes environs allows him to indulge in some spot-on, wickedly kitschy tunes for the Thai Karaoke club where the film’s monster cop repairs to after a hard day of dismemberment. Bits and pieces of Martinez’s score variations also fill Milan’s lovingly produced LP edition of GOD, which ends with Proud’s striking “You’re My Dream,” its lullabye bells erupting into rapturous symphonic strains that send ONLY GOD FORGIVES  out with the kind of tuneful passion it so lethally lacks otherwise. Fortunately, there’s nothing to pardon Cliff Martinez about here. Only to praise him.