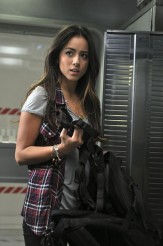 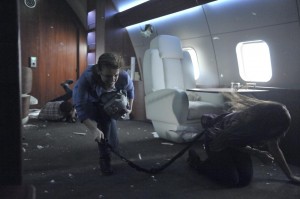 The second episode of MARVEL’S AGENTS OF SHIELD was a bit of a disappointment.

After a really good opening episode full of interesting subplots and witty banter, this played out more like a straight laced action black ops mission – something that we’d see on numerous other shows on numerous other networks.

I was aware that not every episode of SHIELD was going to be full of super powered people and loads of special effect laden action fights but I was expecting it to happen in episode 2. This isn’t what I think most of the people watching this show signed up for. I don’t want to see a quirky NCIS, I want to see Marvel characters, or at least hybrid characters, doing stuff that will further the Marvel universe in some way.

It is not good when the best part of the show is at the end when Agent Nick Fury (guest star Samuel L. Jackson) chastises Agent Coulson (Clark Gregg) on damaging a high tech plane in the first week of its operation. It was a good scene with Fury and shows that maybe this series won’t shy away from bringing in characters inside the established Marvel universe got cameos or one-off episodes. But the rest of “0-8-4” was just tame and predictable.

Who didn’t see the military guys they brought on board the plane turning on the agents and try to take the scary 0-8-4 device – which turned out to be an old Hydra gamma ray bomb capable of leveling serious destruction if set off. Who didn’t see the Shield team coming together to fight the said bad guys on the plane after an entire scene was building how dysfunctional they were all getting along? Like I said, predictable.

While character building is important in any show, it needs to be more organic rather than force-fed down our throats in showing how bad they acted together and it took only an act by a bunch of camo-wearing bad guys to bring them together. Instead focus on the super powered bad guys that create a definite terror threat and then blend in some alone or tag-team character development along the way.

There are some interesting things continuing here with the biggest of them all being how the hell is Coulson alive? Is he a clone? Did they bring him back with magic since that’s how he “died”? What exactly is Tahiti and is it really “magical” and why Coulson is back among the living?

The other interesting aspects is where the alligience of Skye (Chloe Bennet) is. Obviously at the end of “0-8-4” she got a text from the Rising Dawn and she responded with “I’m in.” So will she be conflicted in her motivations with the organization or will she learn to see how Shield is needed in the world? Also, why no Maria Hill (Colbie Smuthers) in this episode?

Hopefully, MARVEL’S AGENTS OF SHIELD next week will prove to add a bit more super to this superhero show.