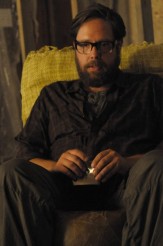 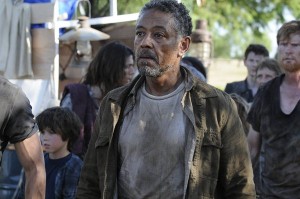 Giancarlo Espodito as Neville in REVOLUTION "Born in the U.S.A." | (c) 2013 Bill Records/NBC

Can you say reboot? I know that I can. Apparently, those over at NBC and the producers of REVOLUTION can as well.

At the end of Season 1 of REVOLUTION, the culmination of the Tower plotline came to be and we saw that Flynn’s agenda all along was to end the war between the rebels and the Monroe militia by dropping nukes on them. The reason for this was because Flynn was working for what remains of the U.S. government and the goal of that government to regain power and ultimately the nation.

At the beginning of Season 2 of REVOLUTION, “Born in the U.S.A.,” we see the after effects of turning the power back on even for a brief few minutes as time has fast-forwarded six months. And things have definitely changed.

Aaron (Zak Orth) has a woman, maybe a drinking problem and is haunted by weird sh** happening with mother nature including a set of fireflies that seem to dance in a pattern. Miles (Billy Burke) did something bad involving a small shack and fire and is still reeling from the events that cost Nora her life. Charlie (Tracy Spiradakos) has left the group because she hates her mother Rachel (Elizabeth Mitchell) and goes off in search of Monroe (David Lyons), who is masquerading as a fighter in New Vegas. She presumably wants to kill him given the fact he killed her brother and the whole Militia killing everyone business. Rachel lost it after the bombs fell because she basically caused it and Miles has brought her back to her dad in order to get her head right.

This is a good thing. REVOLUTION wallowed in what seemed to be never-ending doldrums due to the whole Militia vs. rebels thing. It bogged the whole show down with a battle-of-the-week thing happening episode after episode. Instead of focusing on what the world is now like sans-any sort of power at all (and even exploring how steam and wind power might be an alternative) it focused nearly exclusively on this aspect.

Now with all of the previous season’s trash out of the way, perhaps this show can focus on some of these other aspects as well as the direction it appears to be going.

Probably the biggest plotline is what happened with Aaron. During the season premiere a violent faction is attacking the town where Miles and gang are hanging out. During one of the confrontations, Aaron is fatally killed. While originally I was going to be pissed as Aaron has long been the moral center of the show and losing him was a huge blow to the entire show. But alas, he is brought back to life in the closing moment of the episode. Basically, REVOLUTION is going supernatural – which is funny given Eric Kripke created this show and wrote this episode and, of course, created the long-running SUPERNATURAL show over on The CW.

We’ll see how this pans out but it is a decidedly different change of direction from anything this show has done previously.

Dare I say that I’m encouraged by these turns of events? It’s hard to fathom given how badly the show fell in Season 1 but right now I’m cautiously optimistic as to what is to come.