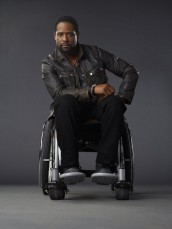 The actor talks about reinventing the classic TV detective 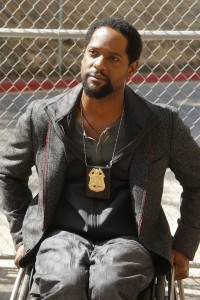 Those old enough to remember – or retro enough to watch rerun channels – have spent years thinking of Ironside as the character portrayed by Raymond Burr for eight seasons (1967-1975), a police detective in a wheelchair whose skills were entirely cerebral rather than physical.

Now NBC has rebooted IRONSIDE, Wednesdays, beginning October 2, at 10 PM, with Blair Underwood in the leading role. Underwood’s NYPD detective Robert Ironside may have lost the use of his legs as the result of a high fall in the line of duty, but he works out ferociously to strengthen the rest of his body when he’s not solving crimes with the aid of his handpicked squad.

Underwood, originally of Tacoma, Washington, has a history with NBC, including his breakout role as lawyer Jonathan Rawlins on the network’s L.A. LAW. More recently, he portrayed U.S. President Elias Martinez on NBC’s THE EVENT and garnered great acclaim – and a Golden Globe nomination – for his work as a troubled psychotherapy patient in HBO’s IN TREATMENT.

At a Q&A session for IRONSIDE, Underwood talks about his character’s physical capabilities. “The self-sufficiency, let me just say from the outset, there’s a gentleman named David Bryant who is my technical advisor. He is a paraplegic. He was paralyzed at age nineteen from a skiing accident. He’s been paralyzed for thirty-five years. A lot of what you see in this portrayal of Ironside is inspired by him. He is very self-sufficient. Before we shot the pilot, we spent many, many hours together just doing what he does, going out in public. He said, ‘Just take the chair and go around your neighborhood.’ We’d go out to dinner and spend a lot of time. The first thing I noticed was there were no handles on his wheelchair. And I said, ‘Dude, why don’t have you have handles on your wheelchair?’ He said, ‘Why would I want to? Why would I want somebody to help me out? I’m independent – whatever I can do for myself, I’m going to do for myself.’ So the first thing we did was cut the handles off the wheelchair. That speaks to some of his independence. David is like that with everything. Ironside is very much like that in terms of his self-sufficiency.”

Underwood also emphasizes how much he admires his IRONSIDE costars, who include Pablo Schreiber, Brent Sexton, Kenneth Choi, Spencer Grammer and Neal Bledsoe. “Can I just say how excited I am to work with this team? I’m serious – each one of these are great actors in their own right. I’ve seen a lot of these faces over the years, and I’ve built a career on being part of an ensemble, I’m big on team, big on community, and these guys bring their A game every day.”

That evening, Underwood and the other actors are poolside at a party thrown by NBC for the Television Critics Association. Underwood steps to one side to talk further about reinventing the classic television character.

ASSIGNMENT X: Had you been looking to play a character with physical challenges?

BLAIR UNDERWOOD: No, I wasn’t looking for a character with physical challenges, but when it came across my desk, it made sense – not because of that, but because of what the challenge was to him emotionally, psychologically. That became interesting.

UNDERWOOD: He takes his leadership of other people very seriously, because he likes being in control. People above him, not so much.

AX: At least in the first episode, Ironside uses the type of chair that paraplegic athletes use when, for instance, playing Murderball, rather than a more traditional wheelchair. What does the slightly outward-tilted wheel do for you and for the character?

UNDERWOOD: Well, we do that in the pilot. Now we have more of a sports chair, where my legs are right underneath me. That chair, we were trying it out. That chair was designed for off-road, pretty much. We figuredNew York City is in many ways off-road terrain. It’s like anything – a lot of what you do in a pilot is trial and error.

AX: Did you have any expectations of what working in the chair would be like, and if you did, does your actual experience match your expectations?

UNDERWOOD: You know, I didn’t really have expectations, so I didn’t know what to expect, really. So every day, it’s a learning experience, as you can imagine. It’s a learning curve.

AX: Are you building up new upper-body muscles from working in the chair?

UNDERWOOD: I don’t think you could help but do that.

AX: How do you like working in New York?

UNDERWOOD: I loveNew York. We shot the pilot there, but we’re shooting the series here inL.A. But I loveNew York. I’m trying to find a way to go back and forth when we can. I don’t know if we will, but we’ll see.

AX: In the pilot, Ironside is assigned to determine whether or not a young woman’s death was suicide, but he winds up investigating and solving a lot of other crimes around that.

UNDERWOOD: Right. They’re all connected to the same crime, so he’s not going off willy-nilly, just doing different crimes – he’s looking under every rock to make sense of why this person [died].

AX: Will most of the cases be like that, where there are all of these little facets that come together?

UNDERWOOD: I can’t say they’re all like that, but I will say there will be a mosaic of sorts that he has to piece together. I think the way we’re telling these stories is what will keep the audience guessing – “How do these connect? Why is he talking to this person? Why is he having his team do this over here?” And then you’ll see how it all comes together and connects.

AX: As well as good guys and romantic leads, you’ve played a couple of out and out homicidal psychos.

AX: Are you bringing any of that energy to Ironside?

UNDERWOOD: Absolutely. You know, every character is so different, but part of that energy oftentimes is aggressive, it’s sometimes maniacal, sometimes it’s nonsensical, it’s emotional, it’s visceral, so yeah, all of those emotions that are usually played in so-called stereotypical bad guys, but those are all very real emotions, are all part of Ironside’s makeup.

AX: Do you have any other projects going on that we should know about right now?