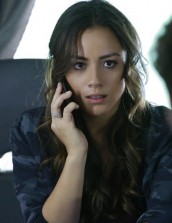 The good, the bad, the ugly of the latest episode 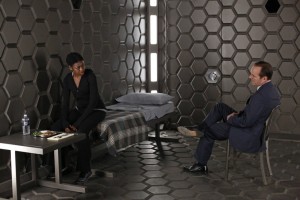 MARVEL’S AGENTS OF SHIELD has already been up and down in its first season and we are only now on the fourth episode.

Unfortunately, “Eye-Spy” didn’t do the show many favors in terms of going up after a pretty decent episode last week. The episode centered on a former Shield agent that was trained by Coulson (Clark Gregg) who for unknown reasons went rogue and was committing all sorts of crime – the latest being the theft of some diamonds in Sweden.

Turns out the agent had a digital eye implanted by an unknown nefarious organization that was using the diamonds as currency to get access to a secret facility somewhere in the former Soviet bloc. Of course, Coulson, who is big on second chances, decides that she may be able to be redeemed if they can eliminate whomever is giving her these missions. The problem is that the high tech eye has a kill switch, a literal kill switch and can be triggered at any time. This leads the team to reroute the transmission and take over the mission while Fitz (Iain De Caestecker) and Simmons (Elizabeth Henstridge) take out the chick’s eye.

I like that they didn’t resolve who was behind the secret missions that were happening and that instead it was another trapped agent that was being used as a handler for Coulson’s former trainee. This opens up the possibility of a lot of things for the show. There could be an anti-S.H.I.E.L.D. group out there that is looking to gather all the good alien artifacts and super powered technology for their own bad needs. If they do it right, it could lead to some good conflicts down the road and sort of a secret arms race that could lead to some high profile shoot outs and other things.

It was also nice to see the former trainee mention that Coulson has changed and asked “what did they do to him?” leaving Agent May (Ming-Na Wen) wondering just what she meant. This is one of the great secrets the show has been carrying on since the first episode and as long as they don’t drag it out too long could be a great plotline, again if done right.

There were some good one-liners this week in order to keep up the snappy dialogue that we have seen in some of the episodes (especially the original “Pilot” that of course was written by Joss Whedon).

Unfortunately, “Eye-Spy” didn’t deviate from any of the same formulas that we have seen in the first four episodes. Fitz and Simmons are aloof and must solve some sort of technology riddle at the last minute in order to either save someone (as in this episode) or the team or some bomb from going off. Agent Ward (Brett Dalton) does the heavy lifting of playing the bad ass spy who bumbles something up and must fight his way to daylight. Skye (Chloe Bennet) is aloof and sassy to Ward and Coulson and must help a member of the team with some technology aspect that she’s obviously good at.

No super powers just high tech weaponry. I know that this show is not necessarily trying to bring the super hero element into the show but given that’s what we sorta got in the “Pilot” it seems at some point we should see some sort of costumed people coming along. At least I am hoping it all won’t be just going from capturing one alien artifact to disarming one high powered technology after the other. That would just not do this series any justice as to what it could be.

The acting was just all over the place here and a lot of the aspects to the plotline didn’t make a lot of sense. Why did Ward have to seduce the guard if more than likely there was going to be a shootout otherwise? And why was there a countdown clock? Ward didn’t set anything off or trip a failsafe? Also isn’t the killing of some Russian guards not best for business when they are trying to keep a low profile?

Obviously they are going for a Ward-Skye romantic thing on this show but why do they need to go down this path? With so many shows already out there doing this where the two good looking cast members hook up wouldn’t it make more sense for them just to be partners here rather than force the romance? Might be unavoidable.