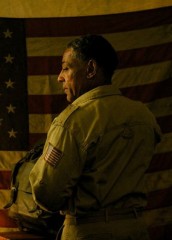 The Patriot penetration is deep and Aaron is on fire 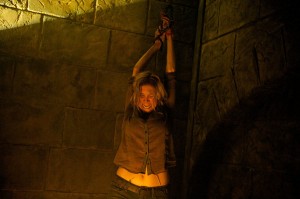 I guess at this point the question has to be asked as to how deep down the rabbit hole does the Patriot group go on REVOLUTION?

In “Patriot Games” we saw that those calling themselves the U.S. government has their hands in pretty much every cookie jar going throughout the former country that crumbled after the lights went out. They are obviously making nice with the people in the town where Neville (Giancarlo Esposito) and his son have worked themselves into. And they have for all intents taken over the town that Miles (Billy Burke) and Rachel (Elizabeth Mitchell) and have already convinced at least one member of the town (the friendly butcher that has been friends with Rachel for years) to turn to the dark side. So much so that he was willing to kill and bury her in his basement – luckily Rachel is crafty and turned the tables on him and ended up burying him.

Miles also found out that the violent gang that attack the town last week has been rounded up and are on board Nazi type trains on route to who knows where to do who knows what. But before things went bad for him (which it always seems to do) he witnessed the same guy that was masquerading as a murder gang member gun down a few of the gang just for sport. Obviously, these are not good people.

Speaking of Neville, his assumptions about the Patriots have been dead on so far and he assumed that one of the military leaders would be wallowing with prostitutes but when he found him drugged up and out of it, it was a perfect opportunity for him to move up in the pecking order to further his cause of bringing the organization down out of revenge for the presumed death of his wife.

Meanwhile, it seems that Aaron (Zak Orth) has gone full-on CARRIE on us as his rebirth has given him the ability to not only see what’s happening through the eyes of fireflies, but cause bad guys to burst into flames in a moment’s notice. As stated in the second episode of the season, REVOLUTION is obviously taking a slight supernatural element with Aaron being able to go, well, supernatural by tapping into whatever force (he says it is the nanotech that caused the blackout) brought him back to life.

It is an interesting switch indeed for a show that had not even an inkling of this in the first season and seems to on paper not work at all but the way it has been written so far is actually working and I am interested to see how they develop this and eventually come to some resolution.

The last subplot involving Charlie (Tracy Spiridakos) and Monroe (David Lyons) sees them again leaning on each other – Charlie to avoid getting gang raped, Monroe trying to make something of his life given how much things have changed. As they make their way back to Rachel and Miles, it is gearing up to be an interesting resistance against these Patriots that obviously have nefarious intentions.