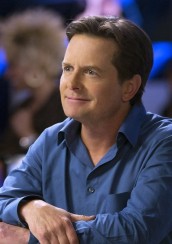 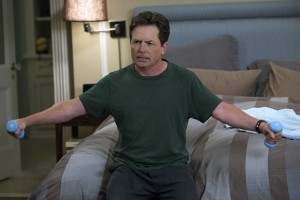 Michael J. Fox is at a party thrown by NBC for its new shows and the Television Critics Association. A small group of reporters is standing around Fox, and someone asks if he’d like to move so he can find a place to sit down.

Fox is cordial and direct. “I didn’t come here to sit.” Instead, he is here to talk about THE MICHAEL J. FOX SHOW, which Fox executive-produces with series creators Will Gluck and Sam Laybourne. In the half-hour series, on NBC Thursdays at 9:30 PM, Fox plays Mike Henry. In real life, Fox is a TV and movie star, married with four children, who has Parkinson’s and is returning to a full-time series gig after a hiatus and doing some guest star gigs. On the show, Mike is a Manhattan news anchor, married with three children, who has Parkinson’s and is returning to local television news after a hiatus. So there’s a certain meta aspect to THE MICHAEL J. FOX SHOW.

Fox has founded the very successful Michael J. Fox Foundation for Parkinson’s Research, but for both himself and his SHOW character, the condition is simply part of life, rather than something that life revolves around.

AX: How quickly did you and the series creators come up with the idea of having Mike be a television reporter?

MICHAEL J. FOX: It was pretty early on and I think Will came up with it. And I immediately loved it, because local anchors have a unique kind of celebrity that’s really based on deep affection and trust. People really relate to their local anchors. It’s the kind of the celebrity that [makes people feel as if they know the person in question]. It’s one thing to be well-known. We wanted him to have a public persona, but we didn’t want to make him an actor or a movie star or some athlete that would kind of separate him from people. We wanted him to be someone that was loved by people and celebrated by people and a news anchor just seemed natural.

AX: In the pilot, there’s a bit with one of the kids opening a pickle jar for Mike. Is that something that was adapted from your home life?

FOX: Yeah. I say to the writers that it’s not unusual for me to pass off [a challenging to deal with object] to one of my kids. It happens without breaking stride. It’s not like, “Can you do this for me?” It’s like “Jar open, moving on.” My family has just adapted to my realities. Especially with the way that they change. There might be one day when I can’t do something that I can do perfectly well the next day. It’s just at that moment I can’t do it. And so they’ve learned to not count on everything being exactly the same, but to react to subtle changes in the situation. And I think they’ve learned resiliency.

AX: Your TV family seems to take Mike’s Parkinson’s as an unremarkable fact of life. Is that also the case with your real family?

FOX: They were great. My kids were so young – my two youngest kids were born after I was diagnosed, so they grew up with this. It’s a reality for them. And for them, it never took up more space than it needed to, either. I always say, with my kids, if you asked them about me, it’s where that line in the show comes from, where he says, “My dad, he comes from Pennsylvania, he wears hats funny.” If you asked my kids to describe me, probably the last thing that they’d say would be that I have Parkinson’s. It just wouldn’t occur to them.

AX: How about the general public?

FOX: I really like the way that people accept what I do and been able to be an advocate and an activist and an actor at the same time. Because everything that I do has been made possible by the reaction that people have to it. It’s like I always say about celebrity – celebrity doesn’t belong to me. I don’t own my celebrity – you own my celebrity. If you don’t give a damn, then I don’t have it. So the whole idea of what I might achieve with the foundation, it doesn’t belong to me, it belongs to you – it belongs to whoever supports the foundation. So everything is just a privilege.

AX: On THE MICHAEL J. FOX SHOW, you break stereotypes about notions of how Parkinson’s might limit a person’s life. How much of making the show is encouraging people and how much is just making a good show?