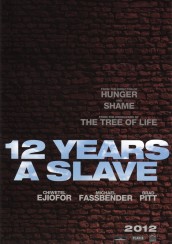 A well-made, harrowing film about a man kidnapped into slavery in the pre-Civil War U.S.

For anybody who is now or has ever been soft on the Confederacy, 12 YEARS A SLAVE is here to beat such sympathies into the ground. Based on an extraordinary but evidently true story, the film is set in the pre-Civil War U.S. Solomon Northup (Chiwetel Ejiofor) is a well-respected, successful black musician living in Saratoga, New York, with his adored wife Anne (Kelsey Scott) and two young children (Quvenzhane Wallis of BEASTS OF THE SOUTHERN WILD plays the daughter). While Solomon is uncomfortable when he sees a white slave owner mistreating a black slave, he refrains from interfering. Then Solomon is tricked into going to Washington,D.C. with an offer of work. His new white employers drug Solomon and sell him to a slave trader. Solomon is beaten into submission (not for the last time) and sold to plantation owner Ford (Benedict Cumberbatch), who has something of a conscience, though not enough to keep prevent him from buying and selling human beings. Ford is capable of appreciating Solomon’s education, but Ford’s white employees are not, creating a dangerous situation. Then things get worse.

12 YEARS A SLAVE is harrowing to the point that some parts of it are genuinely hard to watch. Much like a drama about the Holocaust, what we see here is devastating not only because innocent people are subjected to pain and suffering, but because all of this is being inflicted on them not by monsters or the elements, but by other human beings who view themselves as righteous. Because the filmmakers linger on exactly what is happening here – whippings, rape, suicidal anguish – audiences are likely to be divided on whether this is an unflinching depiction on the horrors of slavery, or simply horrific in the manner of a horror film.

12 YEARS A SLAVE does not exist in a cultural vacuum – there is an argument to be made that if GONE WITH THE WIND, for instance, is going to continue to be lauded, and former slave-owning characters like Cullen Bohannon on HELL ON WHEELS and Bill Compton on TRUE BLOOD are going to be upheld as viable protagonists, there’s room for an emphatic response like this one. Then again, it can be argued that, violence levels aside, 12 YEARS A SLAVE sometimes lets passion overwhelm plausible dialogue.

Director Steve McQueen and screenwriter John Ridley, working from the writings of the actual Solomon Northup, design the film as agitprop, as though slavery in the U.S. is still happening right now. On the one hand, the attitudes and actions of the slave owners and those who endorse them deserve universal and eternal condemnation. On the other hand, this approach opens the door to a lot of very on-the-nose dialogue. Brad Pitt, one of the film’s producers, shows up to deliver an anti-slavery diatribe that sounds less like something he’s saying in conversation with one other man (as he is in the scene) but rather like a speech he’s written and rehearsed.

Ridley has crafted a speaking style for the characters that works in terms of being both coherent to modern ears and evocative of the period. It reminds us that we are in a different culture than our own without distancing us too much. McQueen, whose past films include HUNGER and SHAME, is a filmmaker whose work relies more on the cumulative impact of a single event than on context. Almost any of the scenes of brutality in 12 YEARS A SLAVE don’t depend on the surrounding storyline to be rending – we can empathize more readily with Solomon’s shock because he’s as unaccustomed to being treated like this as we would be, but what happens to him would be equally appalling had he never been a free man.

Ejiofor brings us along for the experience, making Solomon’s heart and mind an open book for us, while exhibiting the kind of dignity and bruised resilience we can only hope we’d muster in similar circumstances. Lupita Nyong’o has enormous presence and conviction as a fifteen-year-old trying to keep her sanity. Cumberbatch does a good job as a man trying hard not to examine his own instincts too closely. Fassbender perhaps goes a little too far with his deranged plantation owner, but he is suitably terrifying and dismaying in all the right ways.

At the risk of delivering a spoiler, as the title suggests, there is some light at the end of the tunnel, but watching the film is still a challenging experience. 12 YEARS A SLAVE is for those who want to see Ejiofor’s brilliance, believe that this history should be told so it will never be repeated – and can bear to witness it interpreted for the screen.