Home » review of MARVEL'S AGENTS OF SHIELD "The Asset" 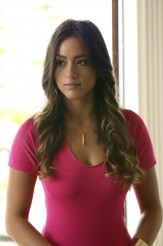 A step up from last week as Skye gets a spotlight to show off her, uh, assets 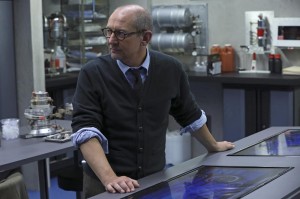 The third episode of MARVEL’S AGENTS OF SHIELD was all about Skye (Chloe Bennet) and her contribution to a team of trained professionals with all a certain skill set.

Yet Skye’s only skill set is being a brilliant hacker with an allegiance to an organization sworn to uncover the truths of the world. So, “The Asset” focused on the hotter than balls Skye dressing up super sexy and using her charm to infiltrate an über secure compound in Malta in order to help rescue a high profile scientist that was kidnapped by a dude that uses technology for monetary gain.

Of course, this allowed us to see Bennet not only dress up in a hot red outfit but also jump into a pool in said outfit and run around all wet for a while. Of course, there was more to the episode than just this.

Skye also wrestled with whether or not she wanted the training that pretty-worthless-so-far Agent Ward (Brett Dalton) was more than willing to give her. This was another case where it seemed like MARVEL’S AGENTS OF SHIELD was forcing character development where they really didn’t need to do it.

We got enough of the character development with Skye by her being in the field and feigning changing allegiances only as a last minute maneuver to bring down the super shield around the compound. This was much needed for her character because up until this point we really don’t know much more about her except for her ties to the hacker organization and that she may be playing both sides.

While this aspect with Skye was OK – it was not great but OK – the most interesting aspect of the episode came at the end where we saw the professor that was kidnapped, who actually let himself get into the situation in order to end the experiments being done on the mysterious Gravitonium. We see a hand extended from the mass of material. Could this be the origin of Gravitron – a notorious and very powerful classic Avengers villain? God damn, I hope so.

Because that brings up a next point about the lack of superheroes on a superhero show. While technically this is not a superhero show, given the pilot episode had a person with super abilities and that’s what this branch of Shield was formed in order to hunt down and either convert to the light side or deal with, it is sorely missing since the opening episode.

Obviously, the show is trying to form its own place inside the Marvel universe but still no one said we couldn’t have a few super powered people running around helping or hindering what they are trying to do. Instead we have had hunt-the-mysterious-object of the week the last two episodes. I would love to see more the development of characters inside the Marvel universe that have not yet been introduced in the movies and could make for some good television. With such a huge amount of people to choose from they could easily create a cottage industry for characters that could be used in other films or even in this series if they played their cards right.