Home » at any price soundtrack review 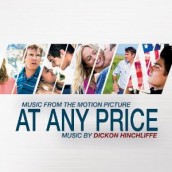 CD Review: AT ANY PRICE soundtrack

Another spellbinding rocker who found himself in the heartland, Dickon Hinchliffe saw his band Tindersticks turn their alt sound to such uniquely percussive works as NENETTE AND BONI and TROUBLE EVERY DAY, all before going solo with such distinctive works that embodied everything from cold-blooded murder in the first “Red Riding” mystery to sweetly accessible romance in LAST CHANCE HARVEY and the sympathetic soul of an abused ape in PROJECT NIMH. Yet this Englishman seems to be best at home in the acoustic badlands of WINTER’S BONE, RAMPART and THE TEXAS KILLING FIELDS.

Though Hinchliffe’s approach is often spare, it speaks volumes for moral rot, perhaps no more so than AT ANY PRICE. Amber waves of grain fill this morality tale of a seed salesman and his disaffected stock car racing son, their seething anger and familial discord given voice through Hinchliffe’s raw, meditative chords. Employing muted strings and feedback to his spare, rhythmic approach, PRICE doesn’t so much conjure the heartland as it does a dusty western ghost town, inevitably building to a showdown that’s about sinking to new moral lows as opposed to unleashing bullets. Evoking a sound that recalls Sonic Youth’s woefully unsung score to MADE IN USA, Hinchliffe’s borderline grunge rock potently tastes emotional ashes amidst our land of plenty, a place used to soaring Copeland-isms now turned to the raw, stripped-down angst of youths, and adults looking to get out.

Clink on the link to Purchase At Any Price soundtrack