Home » TV Review: THE VAMPIRE DIARIES – Season 5 – “I Know What You Did Last Summer” – Season Premiere 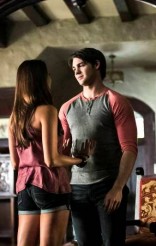 (c) 2013 Annette Brown/The CW
Nina Dobrev as Elena and Steven. R. McQueen as Jeremy in THE VAMPIRE DIARIES I Know What You Did Last Summer
Reviews 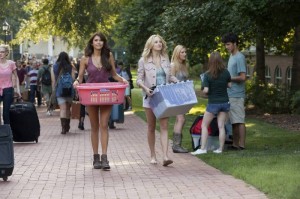 The summer has ended and Elena Gilbert and Caroline Forbes are off to college, finally. Elena has broken the sire bond, and picked Damon as the love of her life. Stefan upset and hurting has disappeared, but as we know from the ending of season 4 in the episode “Graduation” Stefan is in the bottom of the quarry dying over and over again. Silas locked him in a safe and pushed him in. Seems Stefan is the “shadow self” of Silas or Doppelganger and as Damon states, “if I hear Doppelganger one more time I am going to have to learn how to spell it!”

Bonnie Bennett is now dead, but Jeremy Gilbert is alive and because Jeremy can see the dead Bonnie and him can still communicate. No one knows Bonnie has died, not even her father who thinks she is traveling around the country.

Arriving at college Elena and Caroline have moved into their dorm, but big surprise they got a roommate Megan (Hayley Kiyoko) which Caroline is not thrilled about. After making roommate rules Caroline goes through Megan’s stuff and takes a bottle of water from the fridge and takes a sip to find out that it has verbane in it. Now who is Megan? Does she know what they are? Is it a coincidental that she is their roommate? Caroline still hoping Tyler will join them gets a phone call he needs to stay in Tennessee as he is helping a wolf pack.

Getting invited to a party upon arriving they find they cannot enter the house because they have to be invited in. So they decide to leave and Megan calls Elena screaming she needs help, someone is after her and the next second she falls to the ground…dead…she has been bitten by a vampire.

Meanwhile, back in Mystic Falls, Silas kills Bonnie’s father (Rudy Hopkins) while he is on stage at the end of summer party while the whole town looks on, no one screams as Silas has realized that he can get into everyone’s heads all at once. Rebekah (Claire Holt) tries to get Matt to come with her as she is leaving Mystic Falls for a while, but Matt decides he needs to stay.

Katherine has taken the cure forced in her mouth by Elena in the end of season 4 and is no longer a vampire, she shows up at Damon and Stefan’s house begging Damon to help her as she is weak and someone is after her and she can’t run in the heels she is wearing and getting blisters!

This should be an interesting season if Stefan finally decides to turn off his humanity and become the ripper to get out of the safe. After all how many times can he die and come back! Will Katherine decide that she preferred being a vampire, instead of the weak human she now is? Tune in!