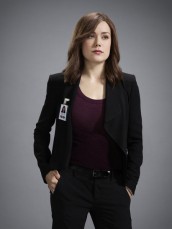 Surprisingly brutal, yet fun beginning to what could be a different series 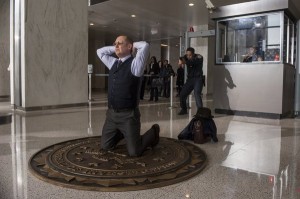 THE BLACKLIST’s premiere episode was surprisingly brutal. That’s a refreshing comment given all the milquetoast police dramas and detective shows that have come and gone over the years.

There is a lot of meat here. The premise alone is wildly entertaining – one of the world’s most sought after criminals gives himself up in order to aid the FBI in capturing other high value targets that he has been watching and collecting information about for the past 20 years. But add to this the fact that Raymond Reddington (James Spader) will only interact and give his valuable information to one person, new FBI profiler Elizabeth Keen (Megan Boone).

On the surface, Keen appears to be an ordinary married woman that has worked her way through the bureau in order to reach a point where she can make a difference in combating terrorism in and outside of the country. But on further examination – with help from Reddington who knows a creepy amount of information about her – Keen has a troubled past where some abuse might have taken place and where she has had to find internal strength in order to get past some of the things that have impacted her life.

And while it appears her husband is a caring and loving individual, she finds under some loose boards what appears to be a man that is leading a double life with multiple passports for multiple countries, a host of disposable cash and a weapon. That bit of information is obviously going to be addressed at another time or will be a continuing plotline (previews to this season seem to point to Keen not bringing up this revelation to her husband at least initially).

The episode centered on Keen, the FBI and Reddington looking for a Bosnian terrorist that kidnapped a military general’s daughter out of revenge and was planning to use the little girl to detonate a chemical weapon at a zoo. This plot was more of a backdrop to setting the stage for the series by introducing us to Reddington and Keen, their relationship and Reddington’s motives for giving the helping the FBI with the Blacklist.

Spader is pretty good in this role. He fits the character perfectly in terms of being smarmy and untrustworthy while at the same time having some semblance of honor no matter how ambiguous it might be. Boone seems also good but it seems any number of actresses could be in this role, however, that might change in future episodes we’ll just have to see.

Overall, THE BLACKLIST seems like it will be a fun, different series and in the face of so many like-minded shows on network television, that’s a welcome thing. Hopefully in future episodes it won’t drop the ball and become formulaic (which could happen if it is a terrorist of the week scenario).