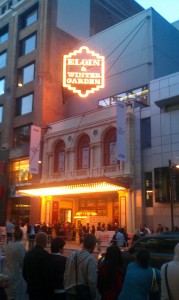 When you hit a film festival like Sundance it’s all about the films and the snow. Park City is first and foremost a resort town and if you aren’t resorting you’re just chasing films. Toronto’s film festival is different. It’s Canada’s NYC, Chicago and LA all rolled into one. And this time of the year the weather is fine (it only rained for half a day), the attractions plentiful and the denizens super friendly (it’s the only festival I know of where people seem to enjoy waiting in line). So before you plan next year’s visit consider the following… 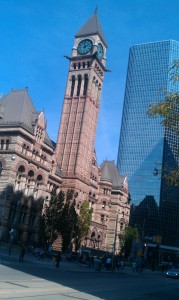 THE TRANSPORTATION: Toronto has some of the cleanest and best run subways, buses and streetcars in the world. Getting from the airport to downtown most opt for a bus, a taxi or a car service. Problem? That runs anywhere from $20 to several hundred dollars AND they all have take the congesting freeways, even the limos. TIP: Get a subway token at the money exchange booth at the airport and head downstairs. From there you get on a short bus to the Kipling station and from there you zip downtown underground on the subway. Final cost: $3 (Assuming of course you don’t have giant luggage bags and if you do you need to read the classic rule of packing: pack only what you need and then take half of it out.) 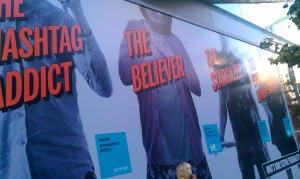 THE LODGING: Great old hotels like the Fairmont Royal York is right across from the train station and there’s everything from the Four Seasons, the new Trump Hotel and the sky view Sheraton Centre Hotel downtown. (One year I stumbled back to the Royal York only to run into a fleet of Secret Service agents. Seems Bill Clinton was celebrating his 60th birthday and had taken over half the hotel.) If you want a hotel and a (celebrity) view the new hot spot is the Ritz-Carlton on Wellington Street West. With an outdoor bar that overlooks the film galas at the Roy Thomson Hall it’s loud, proud and full of eye candy. If you can’t afford these look to the outskirts. Time shares, bed and breakfasts and even neo dives. Remember you’re always close to mass transit and it’s really, really hard to find a “bad” neighborhood in Toronto. Better yet, befriend a Toronto based filmmaker. 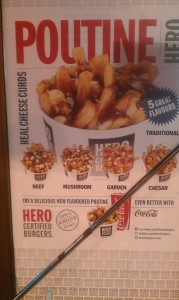 THE FOOD: Toronto has some of the finest restaurants imaginable. Too, too many to even overview. Well known: Any place up in Yorkville, the Beverly Hills of Toronto. Not so well known: Rodney’s Oyster House on King St West. Above it’s the distribution warehouse for seafood for the whole city. Below it’s an intimate restaurant with the freshest seafood imaginable. On a really limited budget and in a hurry? Street dogs. They’re everywhere, they’re under $5 and they’re damned good. 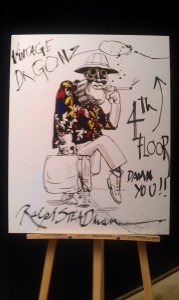 THE ART: World class museums are abundant in Toronto but if you want to keep you sights on film related stuff no problem. The TIFF Bell Lightbox on King Street West is the permanent center for the film festival and runs films and attractions all year long. Even during the festival it’s easy to miss some of the auxiliary entertainment. Two years ago they had a multimedia Federico Fellini exhibit that rivaled the traveling Stanley Kubrick art show. This year nearly hidden away on the fourth floor was the work of British artist Ralph Steadman. Best known for his work in Hunter S. Thompson books this was art gone Gonzo on a massive scale. And a few weeks after the fest? A giant art show extravaganza celebrating local hero David Cronenberg (THE FLY, A HISTORY OF VIOLENCE). 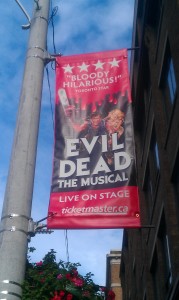 THE THEATER: The big, traditional theaters are on King St West too. This year it was the live staging of THE WIZARD OF OZ. Coming also this year are the usual big box entertainments, BOOK OF MORMON and SISTER ACT. Consider the smaller, edgier theaters. Years back we took a break from the films to hit a tiny theater that did STAR TREK episodes in their entirety. Hilarious (but then again I always laugh during classic STAR TREK). Time permitting I would have checked out EVIL DEAD: THE MUSICAL.

THE MUSIC: You can’t watch movies day and night so get away from it all and hear some local music. Queen St West is still ground zero for hipsters haven. Funky stores and restaurants and music galore and great people watching. If you’re older and tired out seek out the multitude of upscale jazz bars, if you’re young and full of energy there’s a half dozen discos with lines several blocks long too. 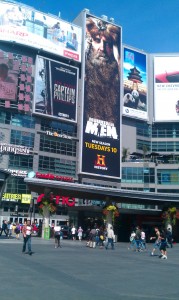 THE IDEA OF RETURNING: You’re going to want to come back to the film festival but consider other events too. A week after TIFF there’s JLF42, a spin off of the Just For Laughs comedy festival and in June NXNW (North By North West) rocks the town with 800 acts and 300,000 attendees. If dressing up is your thing there’s also the Halloween annual Zombie Walk.

THE SHOPPING: I got nothing. But I hear it’s also world class.