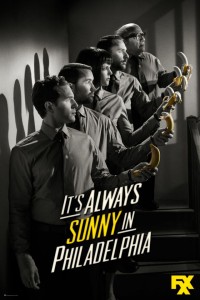 IT’S ALWAYS SUNNY IN PHILADELPHIA debuted in 2005. Since then, the half-hour series about a group of eccentric associates written by, produced by and starring Rob McElhenney, Glenn Howerton and Charlie Day – also starring Kaitlin Olson and Danny DeVito – has become a flagship comedy for FX – so much so that SUNNY’s ninth season is being used as part of launch week for FXX, the new network from parent company Fox. IT’S ALWAYS SUNNY IN PHILADELPHIA‘s new season starts Wednesday, September 4.

Howerton, who plays Dennis Reynolds, takes some time during and after a panel at the Television Critics Association press tour at the Beverly Hilton Hotel to talk about the IT’S ALWAYS SUNNY IN PHILADELPHIA future, starting with how long it may or may not run. A tenth season for 2014 has already been announced.

GLENN HOWERTON: We’re definitely doing [Season] 10 and then we’re in talks to possibly do more.

AX: How long would you like to see SUNNY go?

HOWERTON: I’m torn, because on the one hand, I love the idea of going off and doing something else, but on the other hand, you don’t know if you’re ever going to get something this fun ever again. We are still having fun, we do still have ideas and it’d be a tough thing to say “no” to, to do more, because, especially since we’re only doing ten, it takes us about six or seven months to do that, it still leaves us five months out of the year to do other things. So I don’t know. We’ll see. But creatively speaking, we definitely have more in us. We’re having a blast.

AX: Do you feel any pressure in having IT’S ALWAYS SUNNY IN PHILADELPHIA used to launch a whole new network?

HOWERTON: I don’t. I don’t know why, maybe I should. It’s like, I guess it wouldn’t affect how I produce the show at all. Also, in that respect, I wouldn’t do anything differently. So everything else is just kind of up to [the network] in how they promote it. We’ll see how it works out. But if it didn’t work out for some reason, I don’t think I would put that on myself or on the show. I think it’s a bold move, it’s a very, very bold move. It does show their confidence in the show. And it’s an honor to take on such a daunting task [laughs].

AX: This year, in the run-up to the launch of SUNNY Season 9 and the move to new network FXX, there have been a series of ads where you’re all in character and speaking Swedish. Based on those promos, have you thought about doing an episode all in Swedish? 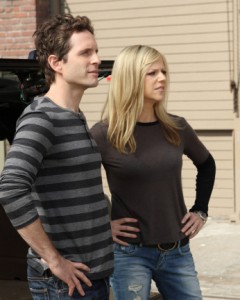 HOWERTON: [laughs] That was hard. That was really, really hard. They turned out really well. God, no. It would just be too difficult.

AX: It would be very funny.

HOWERTON: It would be amazing, yeah. The discussion has not come up, I can tell you that.

AX: Who came up with the idea for the Swedish promos?

HOWERTON: That was our marketing department. We’ve always come to them and we’ve pushed them to always give us things that are different and interesting and strange and not the obvious thing. I think initially when you see our show, it’s easy to think, “Oh, these guys make fart and dick jokes,” and we don’t see ourselves that way. And I think a lot of the ideas initially came from “guys getting drunk,” and we wanted to push away from that and do some more interesting, cool, strange, striking different things, and [the marketing department] really have been running with that for the last couple years. They completely came up with this concept on their own, pitched it to us and we loved it immediately.

AX: On your off-SUNNY time, do you want to write about people who are a little less self-centered?

AX: So SUNNY continues to be a vehicle for you as an actor …

HOWERTON: Yeah. It’s a vehicle for me to be able to perform, and I’m happy to say that being a writer has allowed me to create a character that I can’t imagine playing a more fun character in the entire world than this character – so insane, so immature, such a psychopath, such an egomaniac, but also so incredibly fragile and insecure. And it’s just a blast to play this guy.

AX: Most comedies have at least one person who is there to react to the craziness around him or her. On IT’S ALWAYS SUNNY IN PHILADELPHIA, sometimes everyone seems crazy …

HOWERTON: What the audience needs is a way in, and that’s usually the straight man character, the sort of more normal character. And we found, the more we were doing the show, that we wanted everybody to be funny, and often the way to do that is everybody has got to have a crazy point of view. But the audience still needs a way in. So I think the most important thing for us is to make sure that the audience understands where the characters are coming from, and then on some level, I think what the characters are going for represents some of the worst impulses that we all have. And I think that maybe if it works, that’s why it works, because we recognize a little bit of the worst parts of ourselves in these characters, and then that becomes the way in.

AX: Is there anything you can tease about the places you’re going this year?

HOWERTON: Yeah, we’re doing a Thanksgiving special this year. One of the things that we thought was funny was the idea that the world was closing in on us a little bit. We’ve made too many enemies, and so we take on the original spirit of Thanksgiving, which was to squash the beef between the Pilgrims and the Indians. So we invite all of our enemies over for Thanksgiving dinner to try and bury the hatchet and clear the slate and all those other things. We’re also doing LETHAL WEAPON 6 this year, which is a follow-up from Season 6 [when] our characters did LETHAL WEAPON 5. We’ve got Gail the Snail [played by] Mary Lynn Rajskub, coming back, who we’ve been wanting to bring back for the longest time. It was just a matter of fitting her into the right episode. Of course, we’ve got the McPoyles. We’ve got Bill Ponderosa. Rickety Cricket.

HOWERTON: I did a movie that actually just came out called COFFEE TOWN – it’s available now on Amazon and iTunes and things like that. I’m very proud of it. It’s really funny. I didn’t write the movie or produce it, I just act in it, but I produced an independent film which is coming out next year called THE WILDERNESS OF JAMES that I’m really, really excited about as well.

CD Review: PAJAMA CLUB - self-titled debut
CD Reviews: 3:10 TO YUMA and THE GUNMAN soundtracks
News: WAR FOR THE PLANET OF THE APES teams up with the Jane Goodall In...
THE FARTHEST - VOYAGER IN SPACE: Scientists Linda Spilker and Tom Spil...