Idris Elba is back with a new and ferociously gripping season 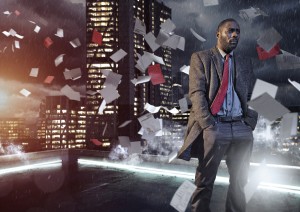 Reportedly, Season 3 of LUTHER is its last. This is a crying shame, since Idris Elba inhabits London police detective John Luther with the kind of intensity that makes the world disappear while we’re watching. Most American shows about police who are this tortured wind up looking a little silly, but here, largely because of Elba’s perfect performance and also because we know how profoundly Luther has transgressed, it has an earned epic feel.

LUTHER’s Season 3 is divided into two cases, though there are through-lines that connect all the episodes. Luther is being investigated by Internal Affairs, with former colleague Erin Gray (Nikki Amuka-Bird) and her boss Detective Superintendent Stark (David O’Hara) both determined to nail him to the wall. At the same time, Luther strikes up a romance with the sunny Mary Day (Sienna Guillory), who has no idea what her new boyfriend’s world is really like.

The first two episodes involve a killing spree by a serial murderer with some especially creepy habits, plus the death of an online troll. The third and fourth episodes put Luther on a collision course with an armed vigilante. The latter storyline really brings home the difference between British and American police dramas – in the U.S., a confrontation between a suspect with a shotgun and an on-duty, unarmed officer of the law would be just about unthinkable, but here it’s quite naturally built into the suspense.

In both threads, Luther is grappling with his own guilt, rage and sense of empathy with the perpetrators, which leads him and us to question his own tactics. Again, a lot of cop shows give lip service to the protagonist’s crisis of conscience. Here, it is deserved, as Luther has done some brutal things that weigh on his mind, not to mention taken steps that have caused enormous collateral damage.

It’s not too much of a spoiler – she’s in the trailers, after all – to note that Ruth Wilson comes back as Luther’s brilliant, helpful and homicidal admirer Alice, who very much has her own way of dealing with things. Multi-dimensional and breathtakingly amoral, Alice is a unique figure in her own right (neither Hannah on DEXTER nor Pam on TRUE BLOOD are really comparable, and they’re the two characters who spring to mind as coming closest) and Wilson plays her with relish and conviction.

There’s plenty of mounting tension, moments of shock and a few scenes of actual horror, but it’s all plugged in to the power source that is Elba as Luther. If this is your genre, this is mustn’t-miss TV.