Interview: Katey Sagal on the series finale of FUTURAMA 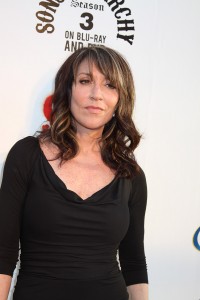 The half-hour animated comedy FUTURAMA created by Matt Groening and developed with David X. Cohen has had a lot of starts and stops, with a seven-season run that began in 1999 and apparently is ending tonight, Wednesday, September 4, on Comedy Central.

On this occasion, actress Katey Sagal, who voices Leela on FUTURAMA, has some words about the series. She’s at the Television Critics Association press tour to talk about FX’s SONS OF ANARCHY (Season 6 premieres Tuesday, September 11), is also open to discussing what may – or may not – be FUTURAMA’s final bow.

ASSIGNMENT X: Are you going to miss FUTURAMA?

KATEY SAGAL: Oh, I do miss FUTURAMA. And Matt promised me at Comic-Con that something would happen. Because we love each other, all of us, and we’ve been canceled three times, I think, and we’ve moved from network to network. So this is the first time we actually looked serious – they actually did it. So I have faith that something will rise again – I believe Matt. We have a huge fan base. It really is the fans that got it to continue this long. And there are a billion stories to tell about the future. So I don’t know where you end.

Article Source:Assignment X
Article: Interview with Katey Sagal on the end of FUTURAMA