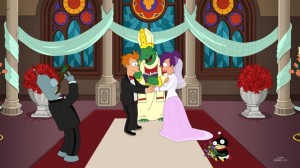 How many times do we have to say goodbye to FUTURAMA. The former Fox series continues to defy the odds, first coming back as a series of direct-to-DVD movies and then for a four year, two season run on Comedy Central.

The Comedy Central series finale “Meanwhile” is classic FUTURAMA and once again wraps things up by focusing on the core relationship of the futuristic series – the long gestating romantic relationship between Leela and Fry.

And this time, it’s about marriage for the two.

In a sweet and affecting episode, “Meanwhile” begins with Professor Farnsworth introduces his latest invention – the ability to go back in time 10 seconds. It seems like an innocent enough device – how bad could things go wrong in 10 seconds, but true to FUTURAMA form, things go wrong pretty quickly.

Fry steals the device, so he can relive proposing to Leela over and over again. However, when she doesn’t show up to the rendezvous point on the Vampire State Building (and assuming she doesn’t want to be with him), Fry decides to jump from the building.

Of course, messing with time has set his watch back and Leela is actually on time. Now Fry ends up in a continuous loop of plunging to his death until the problem can be solved.

Eventually Leela helps save Fry, but he breaks the device. This results in a mixture of two classic TWILIGHT ZONE episodes “A Kind of A Stopwatch” and “Time Enough At Last.” The nice part, is these little nods don’t turn to tragedy, instead, it allows Leela and Fry’s relationship to flourish into old age. Even though the rest of the world has frozen around them, they now get to spend their lives together exploring the world and finally focusing on their love for one another.

There are many sweet moments to “Meanwhile”, but the episode doesn’t shy away from the show’s trademark humor either (watching Fry plunge to his death in a gory display is quite funny). There isn’t much time spent with saying goodbye to other characters either. It really gets down to business and makes this about Leela and Fry, which is why the episode works so well.

And the brief, bittersweet moment at the very end of the episode is a perfect loop to bring everything back around, so, if for some chance FUTURAMA cheats death again, there’s an open door for more.

FUTURAMA has proven, throughout its seven seasons, that an animation series can be both ambitious, daring and very funny. It’s always been highly original and the animation has been top notch from the beginning. Anyone who has watched the show from the beginning can respect its evolution and the intelligence that goes into creating these episodes.

It’s trademark wit and heart will be missed, but the fact that we’ve been given an additional four years with these characters, is the best gift of all.

Related: Interview with Katey Sagal on the end of FUTURAMA