Home » Exclusive Interview: The future of FUTURAMA according to David X. Cohen – Part 2

Exclusive Interview: The future of FUTURAMA according to David X. Cohen – Part 2 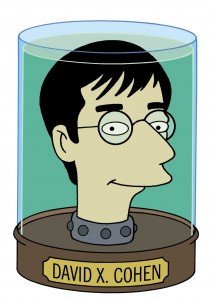 With the animated series FUTURAMA cementing its summer foothold on Comedy Central (airing Thursday nights), the series looks like it’s going to be a regular mainstay on the network’s schedule for the next couple of years at least.

David X. Cohen, who developed the series with creator Matt Groening and also serves as executive producer spoke with ASSIGNMENT X about what to expect from the future of FUTURAMA as he starts the writing process for the forthcoming Seasons 7A and 7B (set to air in 2012 and 2013 respectively).

Here’s what he had to say …

ASSIGNMENT X: So now you’re starting Season 7A and 7B – is it the same schedule as 6A and 6B?

AX: Does that mean you don’t know if you’re coming back for Season 8A and 8B for a couple of years from now?

COHEN: Yeah, probably not. Same as this time. It will be the same deal, next year, Summer 2012, we’ll be finishing the shows relatively closer to the airdates and Summer 2013, we’ll have all those ready by the beginning of the summer and ready to go.

AX: Is it hard to start up and then close down with your writing staff like this?

COHEN: This year was a little easier than in the past. We’ve had gaps of years in the past before between the first run [on Fox] and the DVDs and between the DVDs and the Comedy Central run. This case, it was only a few months people weren’t around the office. We never shut down the office, because we were doing last minute editing and working on the DVD bonus features, even though we thought we would shut down. It was actually easier. We got back our entire writing staff and our entire cast. It’s all the same team, there are no changes made in the personnel, so in that regard it was easier than previously.

COHEN: We learned, as always, that it’s very hard, because it starts out running smoothly, but by the end you’re dealing with writing new scripts and looking at several stages of the animation. At the same time, you’re looking at multiple episodes in one day and doing rewrites on them. It starts out as a manageable process, but by the end of the year it’s chaos because we’re dealing with shows at every stage of production at the same time.

At 26, it’s a tall order. At the same time, as scrappy as it’s been, we’ve all gotten better at the job and we have a better handle of what is a good episode. We don’t spin our wheels doing useless stuff as much as we used to. We have a little better handle of what has worked in the past and what hasn’t. We don’t shy away anymore from weird science-fiction concepts, which in the early days we were nervous about, but have come to realize our fans are always on board for sci-fi episodes. We try to take that more and more seriously over the years. To balance it out, to our surprise, the comedy seems to work in those stories too.

When we really hype up the sci-fi drama of it, you’re sucked into the story in a way where it’s a little more of a release when the jokes come and they play a little better. We’ve definitely learned a lot and learned we don’t have to be scared of complicated time travel or brain switching or things that require our viewer to be on the ball. It’s a complement to our fans – they seem to be on the ball.

AX: Does Comedy Central have a lot of feedback?

COHEN: We’re really just doing it. They had the reruns for several years and the DVD movies, so they said we want more of this stuff. We’re doing what we always do, and they have been great in terms of keeping the show promoted and keeping the re-runs alive. They’re done a huge amount with the Facebook site. We’re up to 14 million likes now and it’s one of the top TV shows [on Facebook], not just cable TV shows. It’s really amazing what Comedy Central has done in keeping the show in the public’s mind even though we’re only doing thirteen a year in the summer. They have done an excellent job with it.

AX: I’m assuming their standards and practives department is a bit more lax than Fox used to be as well.

COHEN: Their standards department is looser than Fox was in the old days. We don’t really have to fight any battles to get the show on the air, because we’re not pushing the limits of what they would want to show. I may have told you this story last year, because it’s more than a year ago, but we did an episode last summer where there was this giant spaceship played by Chris Elliott that was very prudish and easily offended by nudity and cursing. When he heard cursing, he would emit this loud censors beep – like a curse you would beep out on TV. So we had to intentionally put in Leela saying something that he bleeped out on the show. We actually got a note from Comedy Central saying, “what was Leela going to say, because maybe you could say that on Comedy Central.” We kind of got a reverse censor note. “Yeah, say whatever curse you were going to say.” So those were battles we used to fight on Fox, and we no longer have to fight. My take on it is we try to keep the show’s tone pretty consistent with what it was in the old days and not make it filthy if we can, but only if that episode demands.

AX: Comedy Central just started letting SOUTH PARK say “s***” whenever it’s on the show without it getting bleeped – so their censors are getting more and more lax.

COHEN: They can do that without changing the tone of the show, but if we started doing it, it would be a different show. If you like FUTURAMA, you’re going to like these episodes. We’re not changing everything just because we can. We’re trying to come up with new stories and new jokes, but not a new tone.

AX: How involved is Matt Groening with the show?

COHEN: He’s very involved. One thing that has worked out nicely with this return to Comedy Central, is Fox is still producing the show, although they’re not putting it on the Fox network. It still is Fox Television. We’re not on the Fox lot, and we’re literally a hundred yards from the building where the SIMPSONS writers are. Matt can just walk back and forth at will. For the DVDs and the original Fox run, we were not housed on the Fox lot here. Now it’s very easy for him to go back and forth and he’s been here a lot and very involved still coming up with great ideas. In fact, the “Benderama” episode is one of Matt Groening’s great ideas – directly from the mouth of Matt Groening!

AX: Will you try to do another series finale for Season 7A and Season 7B – just in case?

COHEN: I think so. Because we’re in the early stages, we haven’t recorded a single episode of the new 26, but we haven’t figured out how to wrap it up again, I would say if we have not heard word whether there will be more or not after these 26, what choice do we have to once again go down that road? Our routine is we don’t say “bye,” we don’t say “this is the end,” we just try to have a really good episode that has some heart to it and represents the good aspects of FUTURAMA that we would be proud of to be our last episode.

AX: There must be a Guinness Book of World Records for the most series finale of any TV series in history.

COHEN: We did get a Guinness Book of World Records record at Comic-Con last year. It was pretty ridiculous. I don’t know how it qualifies as a record. It did not go into the book, but they just push out the plaque, but we were presented a plaque last year for “Best Reviewed Current Animated TV Show.” I would say that it was some preposterous thing we contrived ourselves, except we didn’t contrive it, someone at Guinness did. Based on some website aggregating reviews, last summer, we were the record holder in that preposterous category. So we have a Guinness record hanging on our wall here – it may have been planted.

AX: Will there be any secondary characters or new characters you want to play with in the next round, or is it still the core?

COHEN: We’ll be seeing Bender’s offspring in 2012 in one of the early scripts. However, in this coming summer, we’re going in the direction of finding out the background of some of these characters. One episode we have coming up this summer is “The Tip of the Zoidberg” and we’re finally going to be answer some questions that even I’ve been wondering for years, namely “why does the Professor and the crew put up with Dr. Zoidberg when he’s such an incompetent doctor?” I’ve always wondered if Zoidberg has dirt on the Professor. So we’re going to do an episode where we flashback and see how the Professor and Zoidberg first met, and what terrible secrets led to Zoidberg staying on at the office to this present day. I think longtime fans will like that episode. We did an episode in last year’s about the origins of Bender and how Hermes was involved.

AX: Will “Anthology of Interest” pop up in Season 7?

COHEN: I feel confident we will do one or two more three-parters. I don’t know if they will be “Anthology of Interest” or if it will be whatever we’re in the mood to do. I like doing those though – from our point of view they’re fun to do. Those are stories that are quick, preposterous and often involve people dying and we need that more abstract form to pull it off.

AX: How has being shown in high-def format changed the show? When you look back at the old episodes from Fox, do they feel antiquated?

COHEN: Yeah, and at the time it was cutting edge since we were working in 3D models. Then you look at it now, it’s 4 X 3 3D models and standard definition. The new ones, side-by-side look way better. You know, everything is in its time.

AX: How many episodes will you have completed once you’re done with Season 7?

COHEN: Counting the DVDs as sixteen, is how they broke down – each one broke into four – at the end of this summer we’ll have 114 episodes and after the next two summers, we’ll have 140. It’s starting to add up in little dribbles.

COHEN: I think this summer’s episodes are really good. Take my biased opinion for it. Because of the production schedule, I think we were going strong during the middle of the year and got back in the groove and a lot of our best episodes fall in this batch of episodes that start of this year. FUTURAMA fans will not be disappointed.

Click on Link: Exclusive Interview with David X. Cohen on Season 6B of FUTURAMA – Part 1

Click on link: AX’s review of FUTURAMA – Season 6B premiere – “Ghost in the Machines”