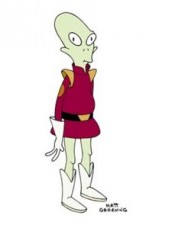 From Calculon to Kif Kroker, the voice actor gets busy with the futuristic animated series 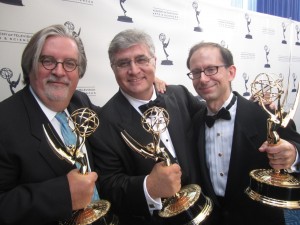 Now only do they have recurring characters they voice (for LaMarche it’s Kif Kroker, Calculon, Lrrr), they’re always coming up with new voices to fill out the show’s unique universe of science-fictional crazies.

“I am one of the utility voice players on the show,” explains LaMarche. “I’m the male Tress MacNeille. She does more voices including one offs and recurring than anyone else on the show. Somebody did a website of how many characters each [voice actor did] and I came in 72 and she was 74. That’s how amazing Tess is.”

Of course, there’s always a chance of overtaking her, but LaMarche says he wants to keep the positions exactly where it is.

“I like that a woman has the lead position of sheer volume of voices, so I don’t want to overtake Tress,” says LaMarche. “She’s the unsung hero on the show. She’s also one of the first people I met in voiceover. She was casting when I first came along. And she’s been [on FUTURAMA] since episode 1 and I’ve always just stood in awe of range of this woman – not to mention she sings in perfect pitch. She has a three octave range and it’s just unbelievable. So I’m happy that Tress has got the lead in doing the most voices on the show.”

In this exclusive interview with ASSIGNMENT X, LaMarche discusses FUTURAMA Season 7 (which airs Wednesday nights on Comedy Central), what his character’s are up to for this summer season and teases about who he plays in the Season 7 finale airing next summer.

ASSIGNMENT X: What can you say about your characters this season?

MAURICE LAMARCHE: We have a very nice return of Lrrr from Omicron Persei 8. We’ve explored his mid-life crisis, and now we’re going to look at his relationship with his teenage son. It’s a rich episode for me. I love when they bring some of the secondary and tertiary characters center stage. It’s been a nice thing for us utility voice players when that happens. 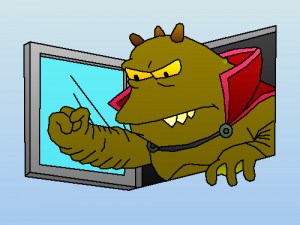 AX: Any other fun characters you haven’t done in a while that are coming back?

AX: Do you get attached to these one-off characters?

LAMARCHE: When I’ve had the chance to do new characters, I just move on. I can’t always refer to them. That’s the thing. You do a one-off character and you never know if he’s going to be coming back. It’s hard to glom on to them and catalog them on the brain. [It’s just] “here’s a new guy.”

AX: Have you ever forgot how to do one of these character voices when they return years later?

LAMARCHE: The show is very good about that. They’ll say, “remember so and so from Episode 2, Season 1” and I’ll go “no.” And they’ll say, “Well we have it right here.” Our crack research team has every single DVD here and very often I do remember them. I’m very glad they do have them ready to go though.

AX: Do you feel there’s a difference between the FUTURAMA Fox years and its Comedy Central run?

LAMARCHE: It still has everything that makes FUTURAMA great. Some of the episodes are very science-fictiony, but my theory is the writing has gotten a lot deeper. I think we’ve grown and matured as human beings on the show, including the writing staff. We’ve all grown up and becoming a parent forces you to explore deeper feelings and the meaning of life. I think it’s made the writers go a little deeper with the big questions.

AX: Is there an “Anthology of Interest” episode this season?

LAMARCHE: We do have an [anthology] three-parter where we go outside the standard FUTURAMA reality. The cool thing is they gave the writers’ assistants a chance to write that show. And it’s great. The quality is every bit as good as anything else we’ve turned out. It’s a great anthology episode and it will be at the end of this summer season.

AX: Can you tease about the season finale airing next summer?

LAMARCHE: In our season finale, which will air next year, I play a washed up superhero who runs a jewelry store. His name is Ultra Guy. Other than that, I don’t know what quite happens. I’m saving it for myself. I’m going to watch that episode [when it airs], and by then I’ll know the fate of the show. If it is the last episode [of the series], I’ll know they’ve done a great job of wrapping it up.

AX: Do you have any other voiceover work coming up you want to talk about?

LAMARCHE: I just did THE SIMPSONS. Dan Castellaneta has come over on our show doing the Robot Devil and we have a little exchange program at THE SIMPSONS. I just went over and did a scene with Dan and Julie Kavner, so it was Homer and Marge in a scene at a sushi bar. I play this rather sadistic chef and it’s actually based on a legendary sushi chef in town who is a favorite of mine, [FUTURAMA creator] Matt [Groening] and several of the SIMPSONS and FUTURAMA writers. We went to lunch there many times and now we have somewhat immortalized him in THE SIMPSONS episode.

AX: And you also mentioned you’re going to be in ROBOT CHICKEN soon too.

LAMARCHE: Yes, final tease. I’ll just say that coming up in the new season of, I get to bring back a character I’m quite known for in a parody sequence, I can’t reveal what it is, and it may be one of the most wrong things I’ve ever done.

Related: TV Review – FUTURAMA – Season 7A – “The Bots and the Bees” – Season Premiere