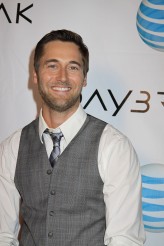 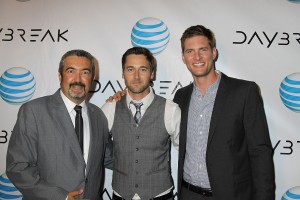 In the Web series DAYBREAK, all Ryan Eggold’s character Ben wants is to be left alone. That’s not in the cards, as Ben becomes caught up in a conspiracy combining action, mysticism and the future of humanity in this five-part production from sponsor AT&T, which has developed a number of tie-in apps for the program, and producer Tim Kring (TOUCH, HEROES), directed by Jon Cassar (24, TERRA NOVA). DAYBREAK can be seen on the Internet at daybreak2012.com – the finale will be posted Thursday night.

At the premiere party for DAYBREAK on the rooftop ofWest Hollywood’s Sunset Tower Hotel, we caught up with Eggold and got his thoughts on starring in the high-end multi-platform action drama.

ASSIGNMENT X: How did you get involved in DAYBREAK?

RYAN EGGOLD: The casting directors had seen my work on something else and thought I’d be right for it, brought me in for a meeting with Tim and Jon. I was excited to meet those guys, because I was familiar with their shows. To be honest, I’d never seen a ton of HEROES or 24. I knew they were monster hits, I just never had watched [consistently], but I’d watched little brief moments. “Oh, crap, these guys are good.” I was very excited to meet them, and the idea of doing action was exciting to me. So we sat down and we had a conversation about technology and content moving towards the Internet and the changing times of how people receive media these days. And it is interesting to me. I felt like maybe we’re on the forefront of a trend and to be part of that experiment is fun, it’s interesting. 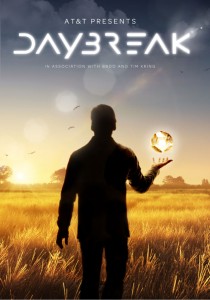 AX: Was DAYBREAK shot like an hour-long television show?

EGGOLD: It’s five [ten-minute-long] episodes, but we shoot all the episodes at once. So it’s like of like shooting a movie. We shot for three weeks, essentially. We had two days in New York to finish up. Which is great, because it lets you get into the story, get into the character, and just live and breathe it. Running while being shot at, I tore a ligament in my foot, but I think if you’re not bleeding, you’re not doing it right [laughs], so hopefully, we are [doing it right].

AX: Are there act breaks in the script? Do you know where each episode is going to end?

EGGOLD: Yes, we do. I think they’re calling them chapters. It’s almost like a one-hour drama split into five parts, because a one-hour drama [on television] essentially has four or five acts. So it’s basically like each chapter is an act at a time, and obviously, we try to create an arc within each chapter, and end up somewhere so that we can brace ourselves for a new beginning in the next chapter, which is always fun.

AX: DAYBREAK is designed to be seen on the Internet and various mobile devices. Does that mean you’re doing anything differently as an actor, or is it pretty much the same as doing dramatic television?

EGGOLD: No, it’s pretty much the same. You just want to do a good job, you just want to be real and make it entertaining, make it. That’s the fear, that because it’s for the Internet, because it’s for a new format that’s untested, that it’s going to be somehow lesser quality or the production’s not going to be as good, but this production was bigger than many productions that I’ve been on for television. Sometimes we’d have three cameras rolling at once, and one would be on a crane and there’d be a van driving through and very intricate shots. Jon Cassar is so great at managing all that action stuff. So yeah, you just try and bear down.

AX: Is this the biggest action thing you’ve done?

EGGOLD: This is the only action thing I’ve done, and I am addicted, I love it. I’ve done dramas and I’ve done comedies, but anything I’ve done thus far has been relationship-driven, characters relating to each other and so forth. But this – obviously, it had all that, but it also had just running and screaming and being shot at and defending your life, and that high stakes energy is really fun.

AX: Did you have time to do any physical preparation for DAYBREAK?

EGGOLD: I did. You know, I wanted to get into shape for the [character], because a), I knew that I’d be running and jumping and diving and all that, and b), he’s a mechanic, and he’s kind of a salt of the earth kind of guy, so I knew he’d kind of have a bit of muscle, a bit of grit to him. I didn’t have much time to acquire it, I had about a week and a half or so before. So I went to the gym a lot, I did a lot of running and all that stuff and got in decent shape for it, and that really helped.

EGGOLD: No. I did three seasons, they just did their fourth. I’m off the show now. My character had to leave and move to Paris to pursue his writing career that he always wanted to do. The kids have now gone onto college, and I was the high school teacher, so it wouldn’t make much sense for me to be hanging around.

EGGOLD: I was both – sad to be leaving a family of good people that I care about and have worked with for three years, and excited for the freedom of a schedule, to be able to do DAYBREAK. I’m going toMichigan to shoot a film. I, like all of us, I think, crave change and new energy and new blood, so that’s very exciting, to be able to do new things.

AX: What are you shooting in Michigan?

EGGOLD: It is Chris Lowell, who’s an actor. [BESIDE STILL WATERS] is his first film. He’s writing and directing it. He’s a terrific guy and he’s written a great script, and we met and had very similar sensibilities and I’m so excited for how this film could turn out. It’s a reunion film. My character’s parents have just died and I’m bringing my friends back to the lake house for one last hurrah before I sell my parents’ house off. So it’s full of expectation and heartbreak and all sorts of fun stuff.

AX: What else will we find out about Ben, your DAYBREAK character?

EGGOLD: You learn very quickly that he has a rough, almost nonexistent relationship with his father, who’s a somewhat famous physicist. So we delve into that, which is fun, because that’s very character-driven, and we delve into his relationship with Sarah [Roemer’s character], who plays my ex-girlfriend, whose character name is Sarah. they reconnect, but in a very honest way. It’s not like, “Hey, let’s get back together,” it’s like he’s stuck in this situation and he has no one else to turn to and so she kind of helps him get through it, and so we explore that. You get more into Eugene Byrd’s character Charles, who’s one of the jack-boxers, and Shannon Lucio’s character.

AX: Are you pleased, surprised, gratified with the end result of DAYBREAK?

EGGOLD: Yeah. My surprise came on set, when I was like, “Oh, wow, this is for real.” Because with a Web series, you don’t know what to expect, and you have that fear that it’s going to be less-than, but like I said, with the production value, with the caliber of Jon’s directing and Tim’s producing and creative [choices], I knew on set that I was part of something good. And by the energy of everybody feeling good about what we were doing, I knew that it would be good. And then seeing it tonight for the first time was just cool to see it all cut together. You know, you do this long take in this scene, and you’re like, “Eh, it was okay.” And then Jon takes it and cuts [together] the moments in it that were great, and those are the moments that you see, so it’s really cool.

Related: Exclusive photos from the DAYBREAK premiere of the new AT&T web series

Related: Exclusive Interview with CHUCK actor Ryan McPartlin on DAYBREAK, the end of CHUCK and the end of CSI: MIAMI