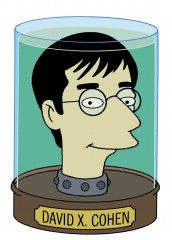 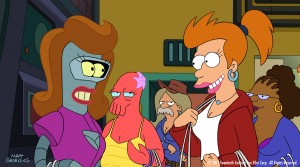 Sometimes it takes time for something so great to get the respect it deserves.

The animated series created by THE SIMPSONS Matt Groening and developed by Groening and David X. Cohen aired on the Fox network from 1999 to 2003, but was bounced around so much on their schedule, it never fully became a cultural phenomenon until the episodes started appearing on DVD.

That success led to four direct-to-DVD movies, and Comedy Central resurrected the series for 26 new episodes after that. The first batch aired last summer and this year we get the other 13 as we continue the adventures of former pizza delivery boy Philip J. Fry (Billy West) who is cryogenically frozen in 1999 and wakes up a 1,000 years later in the future. Now working for the intergalactic delivery service Planet Express, Fry must now contend with his best friend robot Bender (John DiMaggio) and his one-eyed love interest Leela (Katey Sagal).

Cohen spoke with ASSIGNMENT X in this exclusive two-part interview about what the new season has in store this summer which kicks off with a two-episode premiere launch Thursday night at 10:00 pm.

ASSIGNMENT X: I know we do this every time we speak, but just for the sake of people who haven’t read it before, what season are you actually in or not in right now?

DAVID X. COHEN: It’s Season 6B. I think the choice was between 6B or 6.2 and we retroactively decided that last season was 6A and this season is 6B. It doesn’t make a lot sense, but it’s getting complicated. There are so many different numbering systems going. You have your Broadcast seasons, so that’s your 6A last year and 6B this summer. And you have our production season where it was all just one big Season 6, because we did all 26 as one giant season of work here. Hence, the number 6 on both of them. Then there’s the DVD volume numbers, which I don’t even know what they’re on. So we have three different sets of numbering going now. Just take my word for it, regardless of what you call it, it’s a new episode you will be seeing every Thursday this summer. 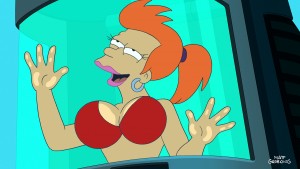 AX: And the four FUTURAMA movies constitute as ….

AX: It’s ironic that since FUTURAMA can be a complex show at times, it would also have an equally complicated episode numbering system.

AX: Are all the episodes completed for Season 6B?

COHEN: The ones for this summer are done. They are completely done. The big difference between 6A and 6B is that last summer Season 6A, we were finishing the episodes just in time to hand them over to Comedy Central which is how television works in general usually. Then, because we did all 26 in a row here, they’re airing them in two sets of thirteen. We finished last year’s thirteen then and in the following months we finished the other thirteen, so they’re all done and ready to go. I know everything about every episode you will see this summer. There are no secrets, other than the ones we want to personally keep. 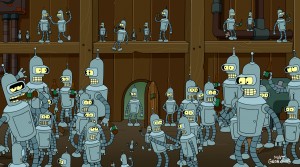 AX: How much tweaking did you do after they were completed last year, since some jokes may now be out-of-date or not as timely?

COHEN: What usually happens, we have a joke that’s topical, it goes out-of-date and then people say, “oh, you’re geniuses, you came up with it out of thin air,” because they don’t remember the news story that triggered it. Actually, we also get the opposite, we’ll write something random and it becomes topical just due to the news cycles. That happened to us last year. For example, there was an episode we had done about Proposition 8, which we changed to Proposition Infinity which recognized Robosexual marriage. In that case, it went out of the media, but then suddenly a big decision was made on appeal the week that episode aired. So suddenly it was, “how did FUTURAMA get this topical episode on the air?” Or we had an episode about the eyePhone last year. There was no particular news about the iPhone, but suddenly that week, Apple introduced a new iPhone, so we kept striking the jackpot last season by luck.

AX: Anything like that this year that you anticipate?

COHEN: Pre-empting the news. When you’re writing about the future, there’s a chance it can come true and sometimes we get lucky.

AX: That Paul Revere thing is kind of a scary coincidence.

COHEN: That’s long odds that that would come up. Actually, when I claim we’re writing about the future and it might come true, I guess I shouldn’t refer to the Revolutionary War as the future probably. Nevertheless, we wrote about the past and it came true. 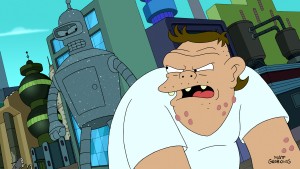 COHEN: They’re going to do a double premiere, which is what they did last year – they’re going to air two new episodes back-to-back and over-hype the first night. The first one is called “Neutopia” and the gist of it is, the crew crashlands on a planet and there’s this strange creature who has no concept of gender and has never encountered the concept of gender. He begins performing some experiments on our crew members to alter, switch and otherwise modify their sexual characteristics, so you will get to see various re-genderized versions of the Planet Express crew and it subsequently results in a disturbing girly calendar that will be seen at the end at the episode.

The second one, is called “Benderama,” so you won’t be surprised to hear there’s a lot of Bender in this episode and a lot of Benders, because Bender acquires the ability to self-replicate. He reproduces infinitely generation after generation of smaller and smaller Benders. There are armies and armies of these small Benders. There’s a danger that as they keep reproducing, they’re going to start eating up all the matter on Earth and destroy all of Earth in their need for more and more matter to create more Benders. Meanwhile, if that wasn’t enough entertainment, people of Earth have managed to aggravate this gigantic alien creature who is Unattractive Giant Monster. We didn’t bother giving him a name and he’s played by comedian Patton Oswalt. He is a creature who is giant and hideously ugly, while at the same time sensitive about his appearance and easily offended and has a temper-control issue. He attacks Earth during this Bender chaos and it’s up to Bender to fend off this unattractive giant. So there’s a lot of action on Night 1 of FUTURAMA …

AX: … and after that’s it’s all Bottle Shows – two people in a room talking for thirty minutes.

COHEN: That’s right, we blew our animation budget on the first night. Actually, we have one that I must hype up that’s going to be the season finale. It’s called “Reincarnation.” The situation we found ourselves in, as always, was that maybe this will be the end of FUTURAMA, so we wanted to write at the end of the season what could be our farewell episode. We decided we would go out with a bang and double our money’s worth. So the second-to-last episode we wrote as your standard last episode ever of FUTURAMA ever. It’s a big science-fiction story of Bender being over-clocked and getting more and more powerful in his computing ability until he can basically foresee events in the future. He ascends far beyond the concerns of mankind and becomes a super-being. Meanwhile there’s this romantic story with Fry and Leela going. So it’s a big sci-fi story and a very touching story. That is called “Overclockwise”, so that would be your standard last episode, but we made it the second-to-last one and did this final episode called “Reincarnation.”

FUTURAMA ended, so now you will see FUTURAMA reincarnated. So we did three mini-episodes in one of those triple-decker three, seven-minute episodes, each one re-envisioned in three alternate animation styles. There’s one black and white segment, which is like an old Max Fleischer cartoon; there’s one in the style of an ‘80s videogame so it’s super low-rez pixilated version; and the final segment is a Japanese Anime version of FUTURAMA. And I should add, anyone who will be at Comic-Con, we’re going to show that Anime segment which will be a crowd-pleaser.

AX: You’re going to show only one and not the whole thing?

COHEN: We’re only going to show the one, so people still have motivation to turn on their TVs and keep us in business.

AX: So FUTURAMA will run continuously throughout the summer?

AX: Any thing else you want to throw out about the new season?

COHEN: Dan Castellaneta will be back as the Robot Devil in an episode called “Ghost in the Machines.” The shocking storyline in that Bender dies early in the episode, but his software continues to run on the Planet Express building’s wireless network. So Bender’s software ghost is haunting and terrifying Fry. And the ghost ends up dealing with the Robot Devil. Astronaut Buzz Aldrin is in an episode toward the end of the summer called “Cold Warriors” and we’re going to see more about Fry’s past and high school days and how it relates to a story in the present day. And Stephen Hawking will be back for his third appearance on FUTURAMA in the final episode “Reincarnation.”

Click on Link: Exclusive Interview with David X. Cohen about the future of FUTURAMA and seasons 7A and 7B – Part 2