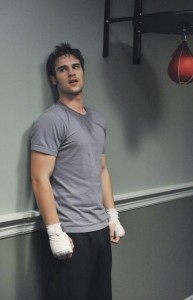 After a so-so first week, I felt I had to give THE NINE LIVES OF CHLOE KING a second chance. Not all-new shows hit it out of the park with the pilot, so I was hoping that major improvements were in store for this series.

Sadly, no such luck.

While “Redemption” does deal with some of story criticisms I had last week  – such as Chloe (Skyler Samuels) feeling remorseful about killing an innocent person with her kiss, and dealing with the gravity of actually dying –  the show also didn’t really do much with her newfound abilities in a way that could be satisfying on a weekly basis of a TV series (here, she uses them to fight off drug dealers who sell pain killers!)

As “Redemption” begins, we have Chloe running around at night like a cat and protector Alek (Benjamin Stone) always nearby trying to watch her. He’s her protector and holds all the secrets of the cat-like race she belongs to called Mai (although he’s a little too secretive about what those secrets actually are).

Meanwhile, Chloe is still devastated that the first boy she ever kissed – Xavier – died because of her (Mai’s can’t kiss humans, otherwise the results are deadly). She attends his funeral and tries to help Xavier’s former pain-killer addicted brother (Alberto De Diego) find “redemption.” He blames himself for Xavier’s death because he came out to help him curb his pain killer habit. Of course the pain killer thugs are breathing down on him to start popping pills again, and it’s up to Chloe, Alek and her best friends buds Amy (Grace Phipps) and Paul (Ki Hong Lee) to save the day.

The relationship between human Brian (Grey Damon) and Chloe heats up too, even though Alek warns the consequences could be dire. Oh, and Brian’s douchebag dad happens to be a Mai hunter and was the one who actually caused Xavier to die.

I knew that an ABC Family series wasn’t going to commit to making Chloe an indirect killer. In some ways though, by taking that interesting facet away, they’ve effectively neutered the show. That one little thing is what made the show interesting and could have kept it from sliding into a bad teen drama with a slight fantasy element. Oh well.

Even though it’s a coincidence, having Brian’s dad be a Mai-hater is very similar to the TEEN WOLF throughline of newbie werewolf Scott falling in love with a girl whose father is a werewolf hunter. TEEN WOLF has done a nice job of balancing that story, and the addition of that twist to CHLOE KING could definitely add a nice layer of conflict that has been missing up until this point.

Surprisingly, some of the best elements of “Redemption” is the teen angst storylines and the actors, who are growing quite nicely into their roles. Both Samuels and Phipps were a bit overly bubbly in the pilot, yet here, they’ve truly grown into their roles by leaps and bounds. Maybe the weight of the storyline has grounded them a bit – and brought a heavier edge to their emotions and feelings, but they’re both proving to be quite engaging actresses and that goes a long way in keeping people around as a show finds its footing.

Damon is also quite likable as Chloe’s scruffy love interest. It’s a nice pairing as well. Also, Amy Pietz as Chloe’s mom is quite good bringing some real-life mom action to the relationship. Their mom-daughter moments have some truths to it and Pietz takes what could have been a rather clueless parental figure and infused her with some charm and smarts.

So yes, casting is good, some of the characters are interesting, but THE NINE LIVES OF CHLOE KING is going to rise or fall on the basis of its on-going mythology and how it translates into weekly adventures. So far, Chloe is a reluctant hero and just learning about her powers. That’s fine, but fighting off drug dealers, is not the kind of action story you want to see in the second episode of series. It’s a bit lazy and hokey. For CHLOE KING to hope to have a few lives left in it, it needs to strike a balance between teen angst and its hyper-real premise. TEEN WOLF, so far, has done a nice job of it, and of course BUFFY excelled in it.

I really didn’t like “Redemption” all that much – even though I clearly see some potential within the framework of the story to break out and be better than it’s been so far. The characters, actors and mythology are all showing promise – now it just has to find out what it wants to be and fast before it starts losing any viewers who have stuck with it this far.