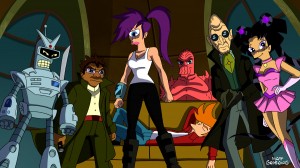 When FUTURAMA decides to do one of its three-segment special episodes, it’s always worth looking forward to and the Season 6B finale “Reincarnation” is one of its best yet.

Taking three totally different animated styles, FUTURAMA re-invents itself in tone and storytelling with each segment progressively getting weirder and weirder.

It’s a geek haven with the first segment kicking things off in black in white in that old Max Fleischer cartoon style (it’s title is “Colorama in glorious black and white”). All the characters bounce up and down throughout the segment (and whistle) that finds Fry (Billy West) wanting to extract a diamond inside a comet in order to propose to Leela (Katey Sagal).

The jokes fly fast and furious and the pay-off is actually quite sweet … that is in a FUTURAMA way.

The second installment takes the Planet Express team and renders them in the style of a 1980s videogame as the Professor (also Billy West) discovers the truth about everything he wanted to know in the universe. There are a ton of references to 1980s games, not to mention the sound effects to go with it too. There’s even a cameo by Stephen Hawking.

For its primitive animation style, the segment is big on ideas and it’s actually a pretty huge mind bender (pardon the pun). Great stuff. 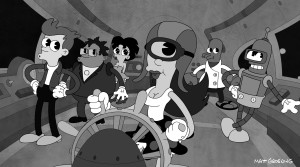 Finally, FUTURAMA goes super-crazy by transforming the team into a Japanese Anime style. The result is absolute hysteria. Every single cliché and every single problem with American dubbed Anime is brought to life in this episode where an alien race that communicates with their gelatinous body movements decides to attack earth.

The visual puns are endless and there are also some great audio cues too that will please Anime (and FUTURAMA) fans too.

When FUTURAMA steps outside of its box and allows itself to be absolutely crazy, the end result is something utterly unique like “Reincarnation.” It’s the kind of brainy, intelligent comedy that few animation series ever attempt or pull off successfully. FUTURAMA though, does it time and time again and as a Season 6B finale, this stands out as perhaps one of the best episodes of any animated series all year.

Now, the long wait until next summer for Season 7A.