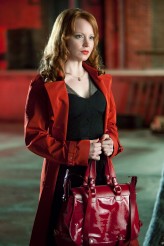 Torchwood approaches the Blessing in a variably satisfying ninth episode

In the ninth episode of the all-new BBC/Starz co-production of TORCHWOOD: MIRACLE DAY, “The Gathering,” the Torchwood team finds itself making an unlikely and uneasy alliance with Oswald Danes (Bill Pullman) as they begin to piece together the truth behind the Families and the Blessing. A mission to two locations on opposite sides of the Earth – Buenos Aires and Shanghai – is launched, but while our heroes draw closer to the answer to the Miracle, Jilly (Lauren Ambrose) is given an opportunity that brings her face to ‘face’ with the Blessing itself. Will she survive the encounter?

The pacing of this ten-part story has flagged a couple times, and in this penultimate episode, it feels more like the show is running out of steam and leaving too many answers to be dealt with in the final installment. Additionally, it takes the odd approach of jumping two months ahead, softening the cliffhanger impact of Jack’s apparently mortal wounding last week –which is now virtually discarded – and further dismantling the sense of urgency that propelled the story in the first few episodes.

The whole set-up concerning the Families is intriguing but remains frustratingly vague, and with only one episode left we’re not likely to get much more background on them. We’re told they took positions in finance, politics, and media to shape the world for their purposes, which puts them in an Illumnati-esque role that strains credulity when you think about this series as part of a larger universe that encompasses years of other Torchwood adventures to say nothing of nearly half a century of DOCTOR WHO. As many fans have now suggested, perhaps we’re no longer in that same collective reality.

While most of the ensemble cast still get chances to shine even if the story is wavering, Rex (Mekhi Phifer) in particular has a triumphant scene in which he takes his superior, Shapiro (John De Lancie), and the others through an investigative thought process blending fact, fiction, and no small amount of logical leaping. Bill Pullman has either turned in a brilliant performance as Oswald Danes or an exceedingly embarrassing one – I’m not even sure anymore which it is – but he has some good moments here too.

Kai Owen, however, has done little most of the series as Rhys except drive a truck and serve as Gwen’s (Eve Myles) husbandly sounding board, but in this episode he becomes noticeably irritating, moronic, and violent, until of everyone in the cast it is Rhys that deduces something vital about the nature of the Blessing and where the Torchwood teams need to go. For those scoring at home, the geography is actually represented inaccurately, but no one said TORCHWOOD was intended as educational fare.

At this point, the almost comical appearance of big-name (or at least big genre name) guest stars that show up for one episode or so and quickly wander off stage again has become part of the rhythm of this story arc. This time we have Frances Fisher as yet another enigmatic representative of the Families ushering Jilly (Lauren Ambrose) to her fateful meeting with the Blessing. The part could have been played by anyone, but with her creepy smile and pin-perfect body language, Fisher does the most she possibly can with a purely functional role.

The Blessing, a strange organic/geologic formation that has some sort of affinity for Jack’s blood, appears to be the CGI realization of that oft-quoted wisdom of Friedrich Nietzsche: “Battle not with monsters, lest ye become a monster, and if you gaze into the abyss, the abyss gazes also into you.” Considering Torchwood’s mission, it’s a philosophy that has a direct bearing on everything the show has been about, but the full revelation of what the Blessing and the Miracle have been about still awaits us in the final episode. Is one hour enough to wrap all this up? We’ll see.

TV Review: NECESSARY ROUGHNESS - Season One - “Pilot”
THE KILLING's Joel Kinnaman Says the Viewer Will be Rewarded in Season...
Exclusive Interview: Ryan McPartlin on DAYBREAK, the end of CHUCK and ...
Interview: Edward Burns is the MOB CITY boss