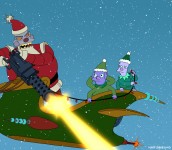 While nothing is going to supplant “X-Mas Story” as the ultimate FUTURAMA holiday episode (the one where Robot Santa terrorizes citizens every December 25), there is something cool about the three-pronged story arc of “The Futurama Holiday Spectacular.”

Three separate holidays are featured in segments that also include their own deranged song and dance number.

First up, is a tale about Fry wanting to bring back pine trees (which became extinct many years ago). When they find the last remaining seeds (which have been contaminated by a germ warfare lab), the trees take over and repopulate the earth to stop global warming.

The second story features Bender and his robot religion Robonica (it involves girl robot wrestling and the need for petroleum oil). When the gang have to drill into the center of the earth to find petroleum oil, it ends in disaster as well (except for Bender).

Finally, the third segment deals with Kwanzaa and a return of Kwanzaa-bot (voiced by Coolio) who explains the importance of this holiday. When Hermes needs to get beeswax candles to preserve the purity of the religion, it leads the gang to a bee planet where the end result is just as disastrous as in the other two tales.

The great part about these trio of stories is how un-Christmas like they are in the end. It’s great to have a show that’s willing to take the jolly out of Christmas and put a little Bah-humbug into the mix (with an added dose of laughs).

The sight gags are fast and furious, and the show also has some very strange asides such as barking snakes as well as Al Gore popping up to voice himself as “The Head of Al Gore” in several of the segments. However, one wonders if all three stories might have been better served as three different episodes, since they have to cram a bunch of plot into three six minute or so chunks.

While the episode isn’t as consistently funny as “X-Mas Story” it still delivers enough laughs to make it another great episode during a solid Season 6 return.

And with the faux promise of Al Gore returning next season as Captain Lance Starman (a funny little tag at the end), FUTURAMA continues to prove why the show has survived cancellation by the Fox network and found a wonderful new home on Comedy Central where the show is respected and can continue to flourish for hopefully many more X-mas’s to come.