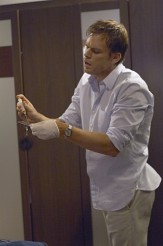 A lot of things get blown open in the latest episode of DEXTER called “Teenage Wasteland” and all of them matter. Deb (Jennifer Carpenter), confined to file room duty, finds DNA evidence that there’s more than one perpetrator in the “barrel girls” case. Deb convinces a reluctant Lt. Laguerta (Lauren Velez) to reopen the case, previously considered closed. Deb is shocked when her boyfriend Quinn (Desmond Harrington) says he loves her – and shocked again when Quinn admits that he suspected Deb’s brother Dexter (Michael C. Hall) might be Trinity Killer associate Kyle Butler, though he now wants to leave it alone. Liddy (Peter Weller), the disgraced cop Quinn hired as a private investigator, doesn’t want to leave it alone, and has pictures of Dexter and Lumen (Julia Stiles) doing something late at night on Dexter’s boat with big plastic bags.

Dexter, meanwhile, is trying to find evidence that famous motivational speaker Jordan Chase (Jonny Lee Miller) is one of Lumen’s erstwhile tormentors, which we already know he is. Dexter’s timetable is upended when twelve-year-old stepdaughter Astor (Christina Robinson) shows up drunk, best friend Olivia in tow. Dexter is understandably rattled by this, but his attitude changes when it turns out that Astor’s real purpose in coming back to the old house is to protect Olivia from Olivia’s mother’s abusive boyfriend.

Dexter quietly deals with the boyfriend with restraint – i.e., Dexter simply beats the living hell out of the guy but doesn’t kill him, letting him off with a warning to leave town. This prompts a visit from the shade of Harry (James Remar), Dexter’s own adoptive father, who astonishes Dexter by saying he’s proud that Dexter stood up for another person. Harry goes on to say if he had known there was this much more to Dexter, perhaps he would not have led him down the path he’s now on. Dexter tells Astor that he’s proud of her and that he loves her, and Astor reciprocates as much as possible by inviting Dexter in when he brings her home to her grandparents. Dexter also explains to Astor, who has leapt to conclusions, that Lumen is not his girlfriend, but that she is a friend who has been through something bad and he’s trying to help her.

And Lumen does need help – Jordan calls Dexter, gets her and recognizes her voice.

“Teenage Wasteland” has twists and complications in what seems like every scene, yet there’s much more here than brilliant plotting (not that this wouldn’t be more than enough for most shows). Dexter’s reconnection with Astor is touching and the meaning of Harry telling Dexter at once that he’s proud and sorry has any number of implications.

This is the first time that Dexter has even imagined the slightest possibility that his destiny as a killer isn’t written in blood and stone. Where it will lead cannot be fathomed at this juncture, but it’s a fascinating development. Meanwhile, Dexter’s tentative bond with Astor is both unexpected and quite touching. Astor’s realization that she’s over-reacted to what she believed when Harrison drops a toy (it’s better to see it than have it laid out here) is a wonderful enormous emotional beat wrapped in a small moment.

There’s also some swell switching of sympathies regarding Laguerta, who shows humanity just when we’re about to write her off, and poor Quinn, who’s trying to do the right thing. There’s unalloyed satisfaction in seeing Dexter pounding on Olivia’s abuser and there’s plenty of suspense, not only in worrying about what Jordan will do, but also how Dexter can possibly keep his department from linking him to the vanished killers of the “barrel girls,” not to mention what wild card Liddy will do. It’s a great hour of TV.