Exclusive Interview: THE BRIDGE executive producer Elwood Reid talks about the future of the series 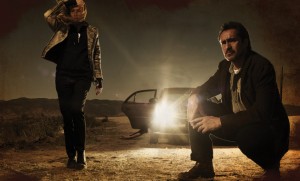 On FX’s THE BRIDGE, currently in its first season Wednesday nights at 10,Juarez,Mexico police detective Marco Ruiz, played by Demian Bichir, and El Paso,Texas police detective Sonya Cross (Diane Kruger) are brought together by a murder case that literally is right in the middle of the bridge between their two jurisdictions. Things quickly become more complicated, with a seemingly unrelated smuggler’s tunnel and a past indiscretion of Marco’s tangling into events.

Elwood Reid, whose past writer/producer credits include HAWAII FIVE-0, COLD CASE and CLOSE TO HOME, teamed up with Meredith Stiehm to adapt THE BRIDGE for FX, based on the Scandinavian series BRON, created by Bjorn Stein.

Following a Q&A event held by FX for the Television Critics Association press tour, Reid makes some time to discuss THE BRIDGE at greater length.

ASSIGNMENT X: How did you and Meredith Stiehm come together to do THE BRIDGE?

ELWOOD REID: I had seen the original project. I was still working on HAWAII FIVE-0 at the time. It was a DVD given to me, and my agency said, “Here are a bunch of projects from Ireland, Israel …” I watched THE BRIDGE and I was like, “I have to have this.” So my agents said, “You can’t have it.” “What do you mean, I can’t have it?” “It’s already sold, they’re talking to writers.” Three months go by, I keep calling my agents, I go, “Where the f*** is this project, I need to have it.” And then they said mysteriously, “Well, we think we have a writer involved with it.” So I sat down. I thought, “What writer at our agency would have that?” I thought a female detective would be probably Meredith, so I called her and said, “Let’s have lunch.” I didn’t tell her what the lunch was about. So [we sat] down a lunch [to talk about] THE BRIDGE. And we just formed the partnership that way, over the love of this project. And I knew what it was the minute I saw it.

AX: What’s the division of responsibility between the two of you on THE BRIDGE?

AX: Do either of you speak Spanish?

REID: No. I think she has a little Spanish knowledge – she can speak a few phrases and words – but we’ve got a lot of Spanish speakers on our staff, up and down, all the way from our grips to some people in the writers’ room, so we have enough people to give us that information. Demian is a great resource for that; he corrects us all the time.

AX: The original version of THE BRIDGE, BRON, deals with the bridge between Sweden and Denmark. Those two countries seem to have different issues with each other than the U.S. and Mexico do. Can you talk about what those different issues are?

REID: We were told that it’s cultural, that the Danes drink more, they probably have a little more sex. The Swedes are very serious. I’m being told this, this is all second-hand. And there are some socialized medical issues and maybe a few more homeless people inDenmark – that was my vague understanding of it.

AX: And the U.S. version of THE BRIDGE was originally going to take place on the U.S./Canadian border …

REID: The studio – I don’t disagree – wanted to take something which was Scandinavian noir, which was the original, and they go, “Oh, it’s in a cold chilly place with lots of white people? Let’s just go do that in the United States.” So they started going to Detroit,Canada – I’ve lived in that area. There’s nothing really there and it’s very depressing. You think Juarez is depressing –Detroit is even worse. I’d much rather spend time in Juarez than in Detroit. And then Meredith had this awesome idea – because we were struggling – I kept saying, “Mexico,Mexico,Mexico,” and everyone was really resistant to it. Then Meredith said, “What if we set it in Niagara Falls? That’s a kickass pilot. It’s very visual, maybe [Sonya is] based in Toronto.” But I didn’t know where the seasons were going to go. There’s not enough difference between Canada and the United States, except maybe the metric system, better hockey, I don’t know. There wasn’t enough difference. So I kept going, “Mexico,Mexico,Mexico.” I think everyone was basically, “Shut the f*** up,” because I kept saying it. I think it scared a lot of people because of the violence [in Juarez] – it’s a real thing. Eventually, at a dinner party one night with the studio, I just brought it right up with Elizabeth Murdoch, who’d bought the company, and she said, “That’s a great idea.” Once she said that, everyone got out of our way. We could have done it [at the U.S/Canadian border], but this adds a whole different element to it.

AX: There’s a scene in the first episode where Sonya’s boss Hank, played by Ted Levine, sends Sonya to inform a victim’s family that the woman is dead. Sonya handles it with a degree of awkwardness you wouldn’t expect from someone in her position …

REID: Well, it was important for us to try to flag to the audience, this is someone who struggles with nuances of human interaction, so we thought about [Sonya’s] relationship with Hank – Hank wants her to get better at that. She’s been trying to get better at that. He says to her, “Have you been reading your books, have you been doing that stuff?” And so she’s really trying hard. He wants her to be able to do that kind of stuff, and when she kind of fails at it, our hope is that the audience will root for her. We’ve all been in awkward situations like that. But that was a scene we rewrote a lot of times, because we can’t have her just go in and be normal, functioning. We had to flag early on that there was something off with this character.

AX: With casting, it’s been said that Demian Bichir and Diane Kruger were actually your and Meredith Stiehm’s first choices for those roles. Is that correct?

REID: I mean, this never happens. We wrote this with them in mind. I kept saying, “FX, it’s Demian, it’s Diane.” And it never happens that you get your first choice. Diane, she played a little hard to get. We had to take a few meetings with her and she had notes. The hardest thing about Demian was getting hold of him. He was somewhere in the middle of Mexico and he had some kind of weird satellite phone. He calls up and I thought I was going to have to convince him. He’s an Oscar nominee [as lead actor for 2011’s A BETTER LIFE]. He calls up, [says] “I’m in,” and that was the end of the conversation. Meredith and I looked at each other. It was like, “Okay.” It was that easy. It was bizarre. Never happens that way.

AX: And were there any other actors that you looked at and thought, “We really want that person”? Matthew Lillard is doing a great job as reporter Daniel Frye …

REID: We could not cast that part. We read that part for months, and I was so f***ing sick of that part, I couldn’t even watch the auditions any more. We were already getting prepped and ready to shoot, and someone said, “Oh, Matthew Lillard came in to read.” I knew Matthew Lillard, and I saw him on tape, his reading was amazing and we hired him like that. That was the luckiest thing that happened to us for casting, because that was the one role we could not cast. We found Thomas Wright [who plays Steven Linder] very, very quickly. He walked in – he’d only been in the country two days [Wright is Australian] and he walked into our audition and we hired him right away. Matthew Lillard’s character was very hard to find [the right actor for]. He’s a really good actor. We feel blessed to have him.

AX: Going forward, what’s the balance going to be between the murder mystery and the character drama?

REID: Ultimately, and this is my opinion, I think if the show is going to succeed, it has to be a character mystery. It’s not a whodunit. There will be elements of that, but I think on a lot of FX’s shows, you fall in love with the characters and the world and you follow that, even if it’s mysteries that drag you through. So I think that’s our motto going forward. We don’t want to have another big case next year. There is going to be something that Sonya’s working on, but it’s going to lead off in many different directions and kind of splinter off.

When you’re a writer, you write and see where the show could go. Because the scary thing for a writer is when you start writing something and you don’t even know where the next episode is. I mean, I started as a novelist, and I can’t tell you the number of times I’d start a book and I’d just know I’d run out of gas around page one hundred. The books that ended up turning into novels, you’d just know right from the beginning there’s enough gas in that tank to get you there. We felt that with THE BRIDGE, so we felt very confident that there’s a lot here.

AX: Are you concerned at all with coming up with another case where American Sonya and Mexican Marco can legitimately work together?

REID: At the end of this season, you’ll begin to see how we start to address that.

AX: In real life, so many young women are murdered in Juarez that’s it’s called …

REID: Genocide. “Femicide,” they call it. We’re going to pick that up. Meredith and I talk about this a lot – that’s a real thing, that’s not a manufactured thing, so I want to be very careful picking that up. I think it’s a very dangerous thing to try to pick that up, and we’re going to do it with as much respect as we possibly can. But we want to service that story.

AX: But I mean, is the case that this is a part of that femicide, or is this its own –

REID: The second season will wind into that. The killer in the first season is pointing out that this is taking place. Because a lot of people don’t even know in this country that this is taking place down there. It’s right across the border. So we’re going to deal with it – if we’re lucky enough to get ratings and get a second season, we’re going to deal with it in the way that I think THE WIRE dealt with Baltimore and drugs. We’re trying to sort of look at systems and cultures down there, try to weave it in and be as realistic as possible. Because it’s not a fantasy like THE FOLLOWING. It’s about a real place and real people, so we’re trying to be a little more realistic about it.

AX: Is there anything else we should know about THE BRIDGE?

REID: I would just ask you to pay attention.