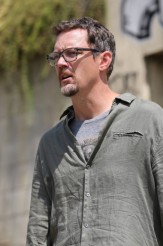 The actor talks about playing Daniel Frye and the car scene 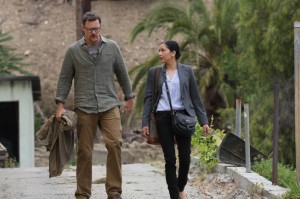 In THE BRIDGE, now in its first season on FX Wednesday nights at 10 PM,Juarez,Mexico police detective Marco Ruiz (Demian Bechir) and El Paso,Texas police detective Sonya Cross (Diane Kruger) wind up working together on a homicide case that spans both their jurisdictions. Matthew Lillard’s character, reporter Daniel Frye, is often more a hindrance than a help, partly because he’s unethical and partly because he starts out as an alcoholic drug user, though as of last week’s episode, he’s trying to clean up his act.

California native Lillard has been in a wide variety of fare, mostly in feature films including the original SCREAM, director Kenneth Branagh’s Shakespearean musical version of LOVE’S LABOUR’S LOST and THE DESCENDANTS, as well as giving one of the all-time great performances opposite a CGI costar as Shaggy in the SCOOBY-DOO films, but he’s never before had a role quite like Frye. At a party thrown by Fox and FX for the Television Critics Association press tour, he talks about portraying a self-destructive journalist.

AX: Daniel Frye is a bit on the slimy side …

MATTHEW LILLARD: Yes, for sure.

AX: What is Frye’s view of himself?

LILLARD: I think his view of himself is that he’s the smartest guy in the room, and he thinks he should be senior editor. Because he’s not, he hates himself. And he’s tortured. He’s a tortured, messed-up human being. But to me, that’s the best thing about him.

AX: A lot of the roles you play are comedic. There’s a little bit of a comedic edge to Frye, even though he’s tragic and sometimes very unpleasant. Is it important to bring some humor to the character?

LILLARD: Well, the writers give me that sword to play with. I think it helps the show – I think the levity he brings is true to life. I don’t think anything in life is cut and dried. I don’t think it’s drama or comedy – I think the great thing about this show is that we get to play in that gray area. We get to be funny, we get to be dramatic or an a**hole. That’s an exciting place to live.

AX: Were you aware of the situation in Ciudad Juarez before doing THE BRIDGE?

LILLARD: Yes, but in a cursory way. I mean, like most Americans, I know it’s a bad place to live, I know that there are issues, but before walking into the show, it was not in my lexicon of my conscious sphere.

LILLARD: I had to [learn to] do cocaine. I may be the only actor in Hollywood who’s never done coke, so that was a moment that I had to figure out.

AX: There’s an episode where Frye spends most of it trapped in a car where he and the police believe a bomb is about to go off, and any sudden movements will cause it to detonate …

LILLARD: Well, in that scene, you’re worked up to such an emotional place that you’re cutting yourself open for the world to see, and that never feels good. Physically, not a hard thing to do, but when you’re sitting there sobbing for hour after hour, it takes its toll.

AX: Was it physically difficult, having all those takes where you can’t move a muscle?

AX: Do you have a favorite scene so far in THE BRIDGE?

LILLARD: Well, that car scene. For me, that was one of the most intense scenes in my life that I’ve ever done on film. It’s certainly in the top three. I had to do it twice. We did it once outside. In the original pilot, we shot outside in bright light. They liked the idea of putting it downstairs in an underground basement, so I had to do the whole scene again six months later. The fact that I could do it twice, I’m proud of that work. As an actor, you’re not always given the opportunity to hang your hat on the work, on the words, on the show, on the overall product, and with this, I’m proud of it and that’s a nice thing to feel.

LILLARD: People should watch it. Start from the beginning, go on through. I feel like they’re trying to do something amazing, we’re aiming for really rare air and a high bar and hopefully at the end of the season, people will be proud of the show and they’ll like the show.