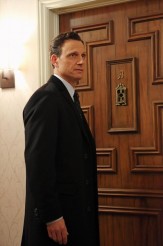 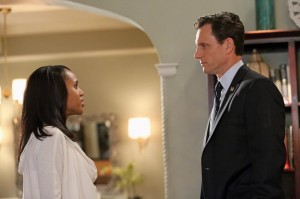 At ABC’s party for the Television Critics Association at the Beverly Hilton, a lot of SCANDAL cast and producers are hanging out together at one end of the ballroom, celebrating star Kerry Washington’s Outstanding Lead Actress in a Drama nomination and the show’s overall success in general.

Naturally, no one – certainly not Tony Goldwyn, who plays U.S. President Fitzgerald “Fitz” Grant – is going to give out any Season 3 spoilers. However, he is willing to tease Fitz’s state of mind following the bombshell events that ended Season 2.

ASSIGNMENT X: Are all of the things that happened in the Season 2 climax going to change the way you play Fitz at all?

TONY GOLDWYN: No. I feel like Fitz is in a very difficult place, seemingly defeated, but I’m not sure that’s the whole story. As far as I’m concerned, Fitz’s priorities haven’t changed, and he’s determined to have his cake and eat it, too. We’ll see how that works out [laughs].

GOLDWYN: I’m just so proud of her and with so few network dramas being recognized that SCANDAL and Kerry and Danny Bucatinsky [nominated for an Outstanding Guest Actor in a Drama Series Emmy for his performance as James Novak], too, they were included, so it’s great.

AX: Anything else we should know about SCANDAL right now?

GOLDWYN: Tune in October 3. It’s going to be great.