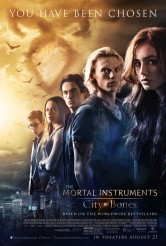 A YA fantasy novel adaptation that’s actually a good movie

Just when the words “based on the best-selling young adult novel” are causing some dismay due to the quality (or lack thereof) of some of the resulting films, along comes THE MORTAL INSTRUMENTS: CITY OF BONES. Based on the first in a series by author Cassandra Clare, the film version of THE MORTAL INSTRUMENTS has not only a really sharp cast but a script that moves like gangbusters, a sense of humor that doesn’t send itself up, a mythology that hangs together and a visual style that is coherent and enveloping.

On her birthday,New York teenager Clary (Lily Collins) learns in rapid order that demons are real and that demons are fought by Shadowhunters, a species of angel/human hybrid. Clary also finds that she is a Shadowhunter herself and that her mother Jocelyn (Lena Headey) has had Clary’s memories wiped repeatedly so that parent and child could hide more effectively. Now, however, dark forces have found them. Jocelyn is kidnapped and Clary must help her fellow Shadowhunters if she ever wants to see her mom again, not to mention preventing an apocalypse.

This quick summation may sound like a number of other plots, but there are notable differences here. First, there isn’t a lot of time spent with people wishing to be normal, behaving irrationally or in training montages. Information is learned on the go and via action, rather than through long bouts of exposition. Also, the shapeshifting demons are appropriately hellish and scary, delivering a welcome frisson of horror.

Director Harold Zwart and screenwriter Jessica Postigo Paquette both seem to have taken stock of the genre and have calibrated what they’re doing here right down the middle – they are aware that the viewers know the conventions, so they don’t make us sit through variations on what themes simply for the sake of doing so. The confrontations are bracing and often creepy, and the drama between the various characters comes from affection and attraction, not stubbornness and sulking.

The characters have personality and the dialogue has snap. Additionally, Jamie Campbell Bower as Jace, a young Shadowhunter who is Clary’s mentor and love interest, has exactly the right sort of impish swagger befitting a supernatural fighter who is quite taken with his own abilities – he’s deliberately funny and has real presence. Collins displays plenty of moxie. Then there are a delicious array of adults, starting with Headey as the fierce Jocelyn (bringing back memories of her days as Sarah Connor). Jared Harris is a perfect mixture of twinkle and ambiguity as the leader of the Shadowhunters, Jonathan Rhys Meyers is a splendidly determined villain and CCH Pounder is a hoot as the witch who lives downstairs. Aidan Turner, once the vampire Mitchell on the original BBC BEING HUMAN, is appealing as a friend of Jocelyn and Clary’s.

Director Zwart knows just how to display the magical world that, MORTAL INSTRUMENTS tells us, is hiding beneath a veneer of mundane life within New York (this brings to mind NEVERWHERE, but by way of pleasant kinship rather than theft). We see the impressive environment but whisk through it, getting enough time to take it in but not so much that we’re bogged down. Screenwriter Paquette keeps the multitude of characters clear for us, so that we’re actually concerned when various individuals are in danger, which is often.

THE MORTAL INSTRUMENTS: CITY OF BONES is a deft piece of fantasy filmmaking, exciting and engaging. Young adults and actual adults alike can enjoy it – it takes the format and makes it feel fresh, fun and even a little scary.