The actress talks about her isolated character 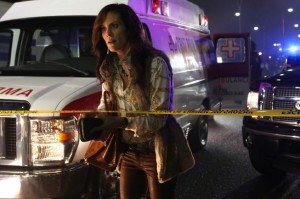 In FX’s freshman series THE BRIDGE, Wednesday nights at 10 PM, beleaguered Juarez,Mexico police detective Marco Ruiz (Demian Bechir) teams up with emotionally damaged El Paso,Texas police detective Sonya Cross (Diane Kruger) to solve crimes that straddle the border of their two towns and nations. Besides his massive on the job troubles, Marco has gotten into hot water with his wife (Catalina Sandino Moreno) by sleeping with wealthy Texas widow Charlotte Millwright, played by Annabeth Gish.Charlotte has her own border-crossing issues, namely a tunnel on her property that leads to Juarez, with dangerous parties on both sides wanting to use it for their own ends.

Actress Gish, a native of Albuquerque, New Mexico, had one of her first major roles in the feature film MYSTIC PIZZA opposite Julia Roberts (they played sisters) and Lili Taylor. Since then, other notable roles have included a series regular gig as FBI Special Agent Monica Reyes on THE X-FILES, playing Elizabeth Bartlet Westin on THE WEST WING, Eileen Caffee on Showtime’s BROTHERHOOD and a recurring role on PRETTY LITTLE LIARS.

Gish is at a party thrown by Fox and FX for the Television Critics Association at Soho House, which has a remarkable view of Los Angeles far below. The actress is accompanied by her husband Wade Allen, a stunt coordinator whose credits encompass THE BRIDGE. Both are happy to talk about their work on the series.

ASSIGNMENT X: When you got THE BRIDGE, how much of the script did they show you, how much did they tell you about the part up front?

ANNABETH GISH: Well, I read the inspired scripts, but as with anything of this nature, which is so complicated and multilayered, I didn’t know the full extent of everything. But I feel like, with the context politically, that it’s a rich minefield.

AX: How would you describe Charlotte as a character?

GISH: For me, Charlotte Millwright does sort of exist on this plane like a lonely island, in a cage protected by her husband’s wealth. But through the course of the season, we discover who she really is and what she’s made of, as Meredith [Stiehm] and Elwood [Reid, who together adapted THE BRIDGE from the Scandinavian series BRON, created by Bjorn Stein] are so good about unpeeling the layers of all of these characters. I grew up in the Southwest as well, so I did have a sensibility of the American Southwest and kind of the border issues.

AX: Before you became involved with THE BRIDGE, were you familiar with the whole situation of Ciudad Juarez being so notorious for having so many missing and murdered young women?

GISH: I was loosely. Not as much as I am now. I was more aware of the cartels and the drugs and the gun-running, but I wasn’t as aware of the “Lost Girls” of Juarez, which has really awakened my awareness.

AX: It’s evidently one of the worst places on Earth to be a young woman.

GISH: It’s terrifying. And I feel like, just because there’s a slight border between our two countries doesn’t relieve us of the pressure or the responsibility for [providing aid on] that issue.

GISH: You know, you have those moments in your career where you read a script and you know that something is special. And I think the character was interesting, the entire project itself is interesting, and Diane and Damien were attached, and Elwood and Meredith. So it was amazing. It was a no-brainer.

AX: Do you have a favorite aspect of the character to play, whether it’s the familial tension with Charlotte’s stepdaughter, or the sexual tension with Damien Bechir as Marco …?

GISH: Oh, my goodness. Again, one of the wonderful aspects of this show for me as an actress is, the wardrobe is fantastic, the big Texas hair, the wealth – there are so many colors that are fabulous to play with.

GISH: She’s from Tampa. And the landscape that surrounds her informs who she is. And we’ll see as the show goes on who she becomes running the tunnel.

AX: Charlotte is running a horse farm. Are you a big horse person in real life?

GISH: Not as big as I should be [laughs]. No, I have a healthy respect for horses. I can ride, but I wouldn’t purport to be an amazing horse-person.

AX: Charlotte encounters a dead horse in one scene. I am hoping that wasn’t a real dead horse …?

GISH: No, no, no. God, no. Absolutely not. It was a stuffed horse. No animals were hurt.

AX: Was there anything you needed to learn in order to play Charlotte, how to handle a gun or a horse or a …?

GISH: Well, my husband is a stunt coordinator, so handling a weapon, he helped me learn that, but yes, horses and guns and everything. I’m really also working on my Spanish, because my character purposefully says, “Caesar [long E]” instead of “Cesar [emphasis on second syllable].”

AX: [to Wade Allen] Are you on THE BRIDGE?

WADE ALLEN: I was on a couple of the episodes. I was away all summer doing a feature, so I had the show covered by someone else.

AX: You’re the stunt supervisor on the show?

AX: Have you had any scenes where you’re stunt-choreographing Ms. Gish?

ALLEN: While I was away, my good friend Jason Rodriguez who was covering the show did have a sequence with her. He’s also Damien’s double and a horse expert. Otherwise, we haven’t had one – I don’t know, ever.

AX: And what’s the most complicated thing you’ve had? Was it the scene in the small room where one man is beating another with an iron?

ALLEN: No, we haven’t seen it yet. It’s not going to be on for a few weeks, so we had a much more complicated car sequence that’s going to come up.

GISH: It only gets better and better as the episodes unravel.

AX: At this point, it seems like Charlotte is very far away from the serial killer storyline.

AX: Can you say whether all the storylines eventually converge?

GISH: I would say all roads lead back to the tunnel that goes between Juarez andEl Paso.

GISH: I just finished a wonderful independent feature that is called GRASS STAINS that I think will come out in the spring. I’m really proud of it – it’s a wonderful, poignant story.

GISH: I’m thrilled to be in the show and I think that it’s a great audience ride.