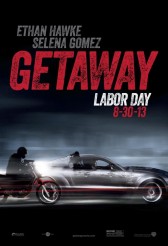 Given most of its nearly wall-to-wall action, the primary reason for the existence of GETAWAY would seem to be a series of car stunts and crashes that are fairly breathtaking. Furthermore, while a lot of films are shot in Bulgaria, GETAWAY is actually set there, which gives us some fresh cityscapes that haven’t been photographed into monotony and also allows at least non-Bulgarian viewers to suspend disbelief about some police procedures (or lack thereof) in moments where we’d expect American law enforcement to call in S.W.A.T. and helicopter reinforcements.

All this is to the good and, while the explanation we finally get is a bit sketchy, the basic premise is not bad. Ethan Hawke stars as Brent Magna, a former race car driver who has done some shady things but now has a mundane job at an airport in Sofia. He and his wife Leanne (Rebecca Budig) are happily married – until Leanne is kidnapped by minions of a mysterious man (voiced by Paul Freeman, who was Belloq in RAIDERS OF THE LOST ARK). The man, speaking to Brent by remote audio, insists that Brent follow his every command if he wants Leanne to stay alive. Brent winds up behind the wheel of a Shelby Snake Ford, doing some driving that scares the hell out of him and us.

Then, while Brent is parked in a garage, a young woman (Selena Gomez) pulls a gun on him and demands he exit the car. Brent instead pulls the young woman into the car, disarms her – and then is ordered to keep her with him by the man.

It is at this moment that GETAWAY spins out of control. Sure, we have a hard time believing a number of elements in the mystery man’s scheme and it’s hard not to notice that the Ford’s tires survive all manner of abuse (perhaps the rubber is infused with adamantium), but these elements are nothing compared to how much Gomez’s unnamed character does not fit with the rest of the film.

It’s not that Gomez is giving a bad performance overall, it’s just that her character seems to have been written for a whole other type of thriller, one perhaps aimed at tween viewers, while the rest of GETAWAY appears to aspire to be a mixture of FAST & FURIOUS – with serious soul-searching – and UNKNOWN. The styles simply don’t fuse, with the result that GETAWAY winds up not really working as either teen adventure nor adult action drama.

Hawke is good as the shamed, desperate but ultimately decent hero and there are a few surprising cameos from famous faces. The stunt coordination is applause-worthy.

Even so, a little of a haunted man trying to save his wife, wondering if the methods justifies the means, with a snarky teen complaining in his ear is just too much of a strange thing.